Wally Carruthers, a well-known Canadian supplier and rental operator and prominent figure in the Ontario Canadian Rental Association, passed away on Nov. 15 at the age of 89. Carruthers was perhaps best known as a representative for Kango power tools. he was predeceased by his wife, Audrey Mae. 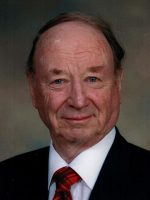 Carruthers was recognized in August 2011 Canadian Rental Service as one of ten industry influencers. Here is the 2011 item:

“Most people are in sales first, then go into business. I was a businessman first, then I went into sales.” According to Wally Carruthers, that was the secret of his success as a supplier of power tools and accessories to the Ontario rental industry. That, all the many friends he made both on the road and in his long involvement with the Ontario CRA. “Joining the RAC was the most important business decision I ever made,” he says.

Even in an industry full of entertaining personalities, Carruthers stands out. Whenever he tells a story about someone with a foreign accent, he imitates the accent perfectly. In a one-hour conversation with Canadian Rental Service, he did Newfie, Irish, Scottish, British and Swedish and nailed them all. He has dozens of funny and unusual stories from the industry, most of which he was directly involved with. One of his friends made up $50 bills with Carruthers’ face on them, and he got a laugh wherever he went handing those out.

The most valuable thing Carruthers has taken away from his time in the rental business is a long list of friends he remembers fondly. The late Danny Cameron of Atlantic Rentals was one of his special favourites, and he enjoys telling the story of the Alberta regional show where Casey Jones hired a train to take attend-ees to see the glacier in Jasper, and Cameron woke everyone up at 6 a.m. playing the bagpipes. “There was a piano on board and lots of singing,” Carruthers remembers, “which was great for me because I was in a barbershop group.”

Carruthers collaborated with Peter Watkins, the founder of Canadian Rental Service, to launch the first Canadian Rental Mart. “He stopped by my house on his way to the cottage,” Carruthers remembers, “and started asking me if I thought the Rental Mart would be a good idea. I liked it and took it to the board [of the Ontario CRA]. They didn’t like it much at first, but we put it to a vote and it got passed.”

This is the official obituary:
Passed away peacefully at the Royal Victoria Regional Health Centre, Barrie, ON on Tuesday, November 15, 2016 at the age of 89. Loving husband of 65 years, to the late Audrey Mae (McLean). Predeceased by parents Issac John and Daisy Margaret (Coutts) and brother Lorne Gordon. Loved father of Wendy Booey (Hal) and Scott (Catherine). Loving grandfather of Amber, Sarah (Jeff), Preston and Troy. Beloved great-grandfather (GG) to Colton. Lovingly remembered by many nieces and nephews. Wally was born in Barrie and was passionately involved in his community serving as a long standing member of Rotary, Probus and Kerr Masonic Lodge #230. As a sports enthusiast, Wally’s contributions led him to become a Barrie Sports Hall of Fame inductee. Wally was a respected businessman both owning and operating several businesses in the area, including Carruthers Cartage and Carruthers Rent-All. Visitation will be held at St. Andrew’s Presbyterian Church, 47 Owen St., Barrie, on Friday, December 2 from 7:00 to 9:00pm. A celebration of Wally’s life will take place at the church on Saturday, December 3 at 11:00am followed by a reception. Memorial donations may be made to the Lung Association or St. Andrew’s Presbyterian Church. A special thank you to those who supported Wally throughout his declining health and who were involved in his care. Arrangements entrusted to MARSHALL W. DRIVER CREMATION & BURIAL SERVICE, 19 Ross St., Barrie. Condolences may be placed at www.drivercremation.ca