November 17, 2016 - 50 members and guests of the Canadian Rental Association Ontario division converged on Whites LES in Toronto for the November membership meeting. 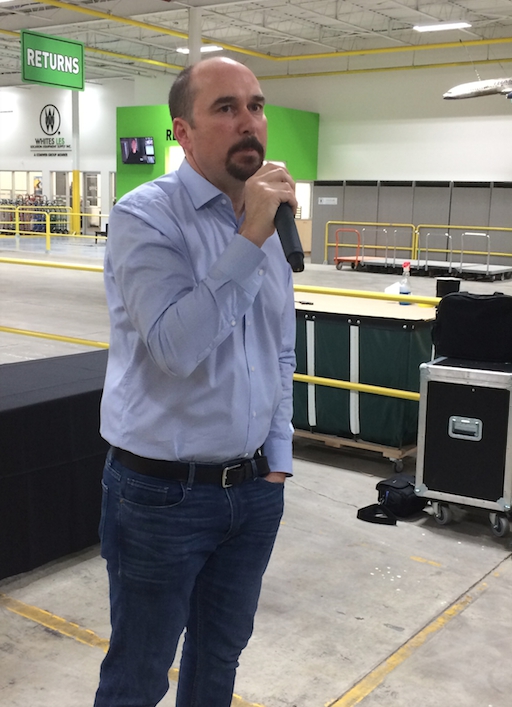 Whites LES is a company that supplies equipment, cameras, lenses, props and other various products to the film industry and, as such, is a bit of a niche rental place. The evening started with a welcome reception and afterward Paul Potvin took the group for a tour through the 350,000 square foot facility explaining what the different divisions do.

The company has recently invested over five million dollars in state-of-the-art digital cameras and lenses which are then rented to film groups for movie and television shoots. There were also lots of interesting (and unique) booms and lifts to which the cameras are mounted for those great action shots.

After the tour, a buffet style dinner consisting of rolls, chicken, roast beef, vegetables and desserts was served. Whites LES really raised the bar with their choice of caterers as the meal was one of the best ever served at a CRA function!

After dinner, Paul Van Staveren of Stayner Rentals and the Ontario CRA President started the business portion of the meeting. He reminded those in attendance that the ARA and CRA both have a number of scholarships available for students of rental company owners and staff. He encouraged all to apply for these and take advantage of the free money. He then handed the microphone over to our host for the evening – Paul Potvin.

Paul gave a history of how his company LES (Location Equipment Supply) started in his garage in 1994 and grew to the point where in 2013 he sold the business to Whites. The company also bought Parallel Rentals in Vancouver in 2015 and is now a national supplier to the film industry with multiple locations right across Canada. Paul went on to present a slide show showing some of the movie sets that his company was involved with including the movies Suicide Squad, Total Recall and the Degrassi TV series. It was an extremely interesting presentation.

The last item of business was the door prize drawings with James Morden of Rentshop and Scott Richie of National Hose taking home the prizes.