October 17, 2016 - Despite the tee off times being moved to include some of BC's finest weather, the annual CRA - BC chapter golf tournament that was held in September was a huge success. 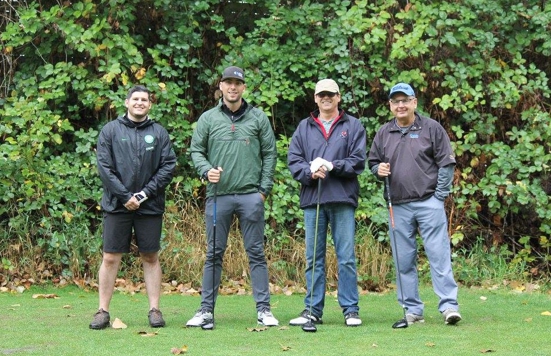 Even though the rain was relentless throughout the tournament, the golfers fared well and played on. The driving of the golf carts was a different story however, and there may have been some fun had on the slick course.

All fun aside, Steve Provost had the pleasure of golfing with the chairman of the board – Dave Mintenko, also known as “Dad” for the day. It was a good turnout despite the liquid sunshine and with over fifty golfers attending, we managed to raise over $1,500 in the Silent Auction and Toonie Toss for the Special Olympics. Although the visibility in the rain was low, the new signs were a big hit with our suppliers.

The Redwoods Golf Course put on a great event and the food at the dinner was fantastic. Troy McDonald, Gord McCormack, Stef Chies and Nicole Novlan were behind the scenes making sure the tournament ran smoothly and we want to thank them for all their hard work.

Let’s hope next year’s forecast brings some sunshine or at least what us west coast folks call “sunny breaks”.

Additional photos can be seen on the CRA Facebook page.