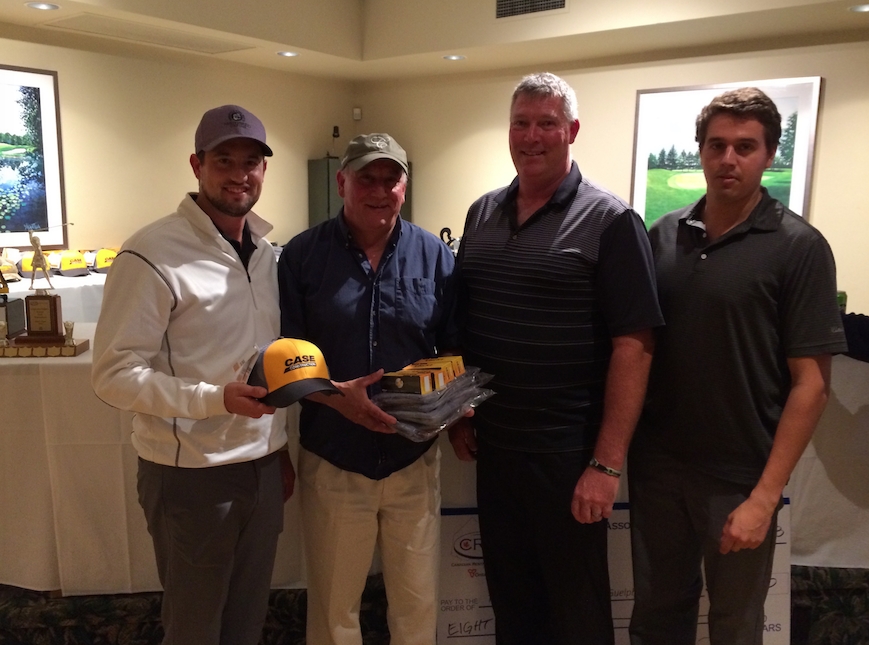 More than 105 golfers took part in the event with the largest number of rental operators participating in quite a few years. The day started with registration at 11:00 under the tent outside the clubhouse. Here golfers signed in for the event and were able to purchase “mulligan” tickets as well as draw prize tickets and tickets for a raffle for the opportunity to ride the course in style in a Cadillac golf cart which was donated by Sunbelt Rentals. Swag bags with great giveaways were also handed out.

Lunch was served at noon and the golf started at 1:00. Numerous suppliers stepped up to sponsor holes including Hilti Canada which came up with a unique event: you had to drive a marshmallow with a golf club with the longest drive winning a duffel bag full of products. This drew quite a bit of attention. Another interesting hole event was held where you had the opportunity to hit a golf ball with a baseball bat. Again, the longest drive won a prize. There were also the more conventional hole sponsors of longest drive, closest to the hole and three hole-in-one holes (which were again not won this year).

Dinner consisted of ribs, chicken, a baked potato along with salads and dessert and was enjoyed by all. Afterward prizes were awarded. The winning foursome with the low score of –9 was Jeff Pierce from Vulcan Demolition, Carl and Jay Sant from Cooper Equipment and Jeff Elmquist from Centec Corp. These guys obviously spend more time on the golf course than working in their rental businesses. Afterward, all the remaining foursomes were called up and received their golf prizes.

Gord Ellis of Cavalier Industries again acted as MC and did a great job of recognizing all the sponsors for the tournament as well as those that worked at putting on the event. $800 was raised from ticket sales and a representative from the Children’s Foundation of Guelph and Wellington was on hand to accept the cheque and explain how the money gets used.

Lastly, Cam from Cooper Equipment got up and did a nice tribute to long-time rental industry veteran – John McPhail – who passed away on September 15th.

The next CRA Ontario event will take place on October 17th. Watch your inbox for more details.