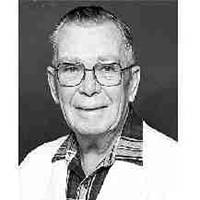 John was the dearly loved husband of Joan (Lindsay); and will be greatly missed by sons Doug and his wife Judy, Paul and his friend Laurie and Tom and his friend Anne. He was dearly loved by grandchildren Teresa and her husband Paul, Shauna and her husband Jeremy, John, Vanessa, Rebecca, Melissa, Sarah and great-grandson, Austin. John was predeceased by his son, Peter.

The family would like to offer their  eternal gratitude to the staff at peopleCare Oakcrossing, 2nd floor 'Sugar Maple', especially to Maria for her loving care, compassion and help in making John's last few weeks comfortable ones. At John's request, cremation has taken place.

A service of Celebration of Life will be held at St. Stephen's Memorial Anglican Church, 727 Southdale Rd. East on Friday, September 10, 2010 at 1:00 pm. Memorial donations may be made to the charity of your choice.