If you have not yet met Hank McInnis, now’s your opportunity to get to know him.  Starting in February, McInnis will become the next president of the Canadian Rental Association, and take over a one-year term to represent your organization’s best interests. 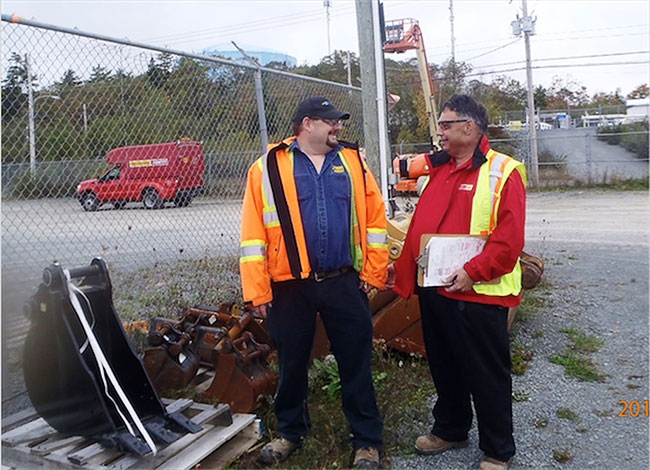 Hank McInnis has found a comfortable home in the rental industry. The friendly and cooperative nature of the industry is his favourite part. If you have not yet met Hank McInnis

Currently, McInnis is assistant manager at Hewitt Rentals in Dartmouth, N.S. Born and raised in the area, he moved to rural Halifax 28 years ago and has been living there ever since. Four decades ago, he married his high school sweetheart and they have one daughter and two grandchildren.

Of course, there is much more to McInnis’s story. So we asked him a few questions about how he decided to enter the rental equipment industry after a lifetime in sales, his approach to customer service and his plans for the organization.

An entirely new kind of career
Prior to entering the equipment rental industry, McInnis spent 23 years in sales, several of which involved selling to big box stores including “the Walmarts and Loblaws of the world,” he says.

McInnis’s sales career started off in general merchandise. Then, when the company he worked for was in the process of partnering with another, he became sales coordinator and liaison between the two companies. Following the sale of one company to another, McInnis took on the role of sales manager for the Maritimes.

Not one to be deterred for too long, however, that experience was the perfect catalyst for McInnis to try something entirely new. “I decided I wanted to try something completely different in life,” McInnis recalls. “I had friends at Hewitt and I knew absolutely nothing about the rental business or heavy construction equipment. It was initially a steep learning curve but because of all the help I received, it wasn’t too bad. You realize there is so much you don’t know, and new things still pop up every day for me to learn.”

So what is his favourite thing to rent out? “It’s got to be the big heavy machinery,” he says. “To me, it’s a more fun piece of equipment and it’s our main purpose here at Hewitt. I like to succeed and personally I feel more successful if I see all that equipment going out of our yard.”

All about the people
According to its website, Hewitt’s mission is to be a recognized leader in the equipment rental industry in Quebec, Labrador West and the Maritimes. It aims to achieve that mission by providing “the best rental service and highly reliable equipment to our customers in the contracting, industrial, landscaping and commercial markets.”

Among the company’s values, Hewitt emphasizes service and customer satisfaction — two areas that McInnis himself is strongly focused on, as he manages front-end staff.

“At Hewitt, our biggest driver is customer service,” he says. “We work and train our people to put the customer first. We want to be friends with the customer — we don’t look at them as just a ‘customer supplier base.’”

Being referred to on a first-name basis is a key objective at Hewitt. “We want our customers to refer to us by our first names. Our goal is that people who contact us want to talk to Hank, or John, or another specific person. If you give that service, especially in a highly competitive market like this one, that’s what we have to offer above and everyone else,” he explains.

According to McInnis, that focus on people is a key differentiator between working in sales and working in rentals — something he realized very quickly when he first entered the rental equipment services industry.

“Once I got into it, I realized that the rental industry is a really fun industry to be in, with great people to work with. Coming from a sales background, everyone was very competitive and nobody worked together. Here, everybody works together and helps one another out, even if they’re competitors. In the rental business, it’s not always about the sale. The bottom line is obviously what you’re after, but the customer service and friendships are just as important.”

Learning opportunities
Clearly an avid learner himself, McInnis consistently looks for opportunities to train and educate his staff. For example, when he and the Hewitt team arrived at this year’s Atlantic trade show, Hank put his sales expertise to good use.

“Our team’s number-one goal was to go out, talk to the suppliers and other rental stores, and take every opportunity to learn and consider this a training session,” he says. “We then set up a lunchtime meeting for everyone to get together and come back with their ideas. We discussed things like new product lines to buy, whether there were new opportunities for us in certain locations, and if we could negotiate better deals for larger purchases.” Then, the team went back out on the floor armed with purchase orders, prepared to meet objectives set during the lunchtime meeting.

“I would highly recommend this approach to anyone with staff — even longstanding employees —because trade shows aren’t just for people doing the buying,” says Hank. “Trade shows are about networking, as well as training for new staff.”

He also looks to the trade show format as a perfect opportunity for forming partnerships. “It’s really helpful if one of your staff has to deal with a supplier or other rental store, because if you already have that contact established through a trade show, it’s much easier to have a business conversation.”

Plans for 2017
During his one-year term as CRA president, McInnis hopes to fulfill two main goals: diversify membership and involvement, and increase member knowledge of all the benefits available to them through the organization. “The rental equipment industry is broad, and currently there’s not a lot of involvement among party and event companies who specialize in rentals,” says McInnis. He points to this as “a growing market. In fact, it seems that there are more local party stores popping up right now than shops in the general tool industry,” surmising this may be because party stores do not experience the same “takeover” as in the construction industry.

So what could be the reason for lower membership among party and event rental companies? According to Hank, “My guess is that they are probably not aware of all the benefits available to them if they join the CRA, so we want to bring more of these businesses in, and let them know what is available to them as members.”

Members of the Canadian Rental Association get all the benefits of the American Rental Association (ARA), plus additional benefits that are offered through the Canadian office. For example, Hank points to CRA’s insurance program; as well as ARA’s program Rental U, which offers more than 100 free online education and training videos for owners, managers and employees on topics including customer service, HR, management, marketing and advertising, and safety. McInnis envisions a campaign of sorts, in which benefits are extensively promoted in all member-facing correspondence and interactions: in newsletters, as ARA talking points, through local meetings and trade shows (and, of course, this magazine).

Moving forward
McInnis acknowledges that it may appear unusual to be CRA president after spending only 13 years in the industry. “I didn’t grow up in the rental business. Many are second and third generation of a family business,” he says. “But I don’t really think I am that different. I think the only real difference is that I don’t have the amount of experience they’ve had in this business.”

The one main similarity, he says, is about objectives for the organization. “If you go back to the past four or five presidents I know, our goals are all the same: rentals first, members first. It’s quite a commitment but I’m willing to take it on and am looking forward to getting started as president.”