Features Profiles
Then and Now: The biggest of 10/Endurance through change

“Call us, we’ve likely got it” is the motto of Atlantic Rentals Ltd. “And if we haven’t got it, we’ll get it,” says Sandy MacBeath, the Moncton store manager of three years. 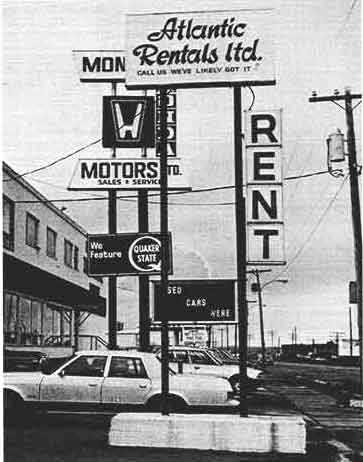 Atlantic Rentals, a well established company, had its inception in 1960. The Moncton branch opened in 1961 and now is one of 10 branches in New Brunswick and Newfoundland.

Although MacBeath has been manager of the Atlantic Rentals only three years, he is no stranger to the building supply business. “I’ve met lots of the construction people in the Moncton area over the years and know many by their first name,” explains MacBeath.

And knowing construction people is good in a business that makes 75 percent of its rental dollars from construction and the other 25 percent from homeowners. “We rent all kinds of equipment from heavy industrial tools and rollers to lawn and garden accessories,” says MacBeath. Glen Cameron, vice-president of Atlantic Rentals, Fredericton disclosed that the Moncton store does business in excess of $300,000 per annum.

The Moncton store is the biggest branch with five full-time employees and two or three students hired in the summer to assist in the peak season. Ensuring the equipment in in good repair keeps the two mechanics, Wayne Barton and Paul Bigger, busy. “Service is our big thing,” explains MacBeath. “If your equipment is down, you aren’t making any money.” Customer service is also a big thing. Harold MacLeod, the assistant manager, and Dean Duplessis keep the inventory flowing. “We trade equipment among our branch stores,” explains MacBeath. “Something that might sit idel here, will be in great demand somewhere else.” MacLeod is als making some changes to the shop to make it more energy efficient.

Atlantic Rentals advertising is mostly by “word of mouth.” “Our radio spots have also been very effective,” says MacBeath, “and we go to shows like Expo East which was held in Moncton last year.” As Atlantic Rentals is located on a main throughfare, they also have new customers “drop by.” “We’re an old established company and we’ve been through some hard years, so people think of us when they want to rent,” adds MacBeath.

Being around for a long time doesn’t guarantee success, however. “Atlantic Rentals buys tough equipment that really stands up,” says MacBeath. “Some people who rent equipment just don’t care of they may not know how to operate it, so you need tough stuff to keep downtime to a minimum.”

Currently, four rental stores serve the 80,000 people of Moncton, New Brunswick and MacBeath expects there will be more stores this year.

Our original story on Atlantic Rentals appeared in July, 1995.

Peter Dwyer worked at the Moncton branch of Atlantic Rentals, starting in 1972, then moved to the Sussex, N.B., branch then to Miramichi. He spent the last 20 years on the road, travelling from store to store.

Sandy MacBeath, the general manager of the Moncton branch who was interviewed in the original article, passed away a few years after retiring from the company.

Atlantic Rentals was founded by Danny Cameron. Dwyer and Danny’s nephew, Glen, bought him out shortly after the 1985 article was published. In 1990, Dwyer and Cameron sold the whole chain to Barrett Diversified out of Woodstock, N.B. Dwyer stayed on as a travelling manager for the Barretts, covering stores all over the Maritimes.  In 2004, United bought the chain from Barrett.

Barrett was in the machinery distribution business and Atlantic came to its attention through conversations with an electrician that worked for the company. Danny was in his late 60s at the  time and looking to retire. Glen also stayed on for many years with the Barrett-owned group. The Barretts retained the name Atlantic Rentals. When people think of consolidation in the rental industry, they usually think of United, but Barrett had done a great deal of consolidation prior to United getting involved.  They bought stores all over the Atlantic provinces, but generally kept them open under their prior names. United, on the other hand, rebranded its stores and closed less successful ones to avoid overlapping market areas.

“We grew the business a lot in the Barrett days,” Dwyer remembers. There were some boom times for New Brunswick in the ‘90s with new pulp and paper mills and mines coming in. It was a good time to be on the road as a rental salesperson. Taking on the larger contracts in these sectors forced Atlantic to make some changes, like bringing in high-reach forklifts and more construction heat.

The sale to United brought big changes to Atlantic’s approach to the rental market. Dwyer says the stores began to focus on larger and more expensive equipment – aerial lifts and forklifts especially – and less on the smaller items that used to be popular with homeowners and small contractors. “There wasn’t such a big demand,” Dwyer says. “People buy that stuff now because it is so cheap.”

Process was another big change. United brought centralization and computerization to invoicing, scheduling, payroll and many other aspects of Atlantic’s administration. Safety training and policies around customer and worker safety also got a lot more focus, Dwyer says.

United also brought national accounts that significantly increased the stores’ business. For instance, when Costco built a new location, one of Dwyer’s stores got all the rentals for the project because of Costco’s relationship with United.

Even as being owned by United changed many things, Dwyer found that loyalty to store locations and the people who worked there remained the same. “At our Fredericton location it was interesting to see the second generation coming around,” he remembers. “These are people who’s fathers owned businesses and brought them in as kids and now they have turned things over to them and they are still coming in.”

Dwyer found the constant flow of new challenges to be his favourite thing about the rental industry. Introducing new equipment to the fleet was always fun, he found, and incorporating newly bought stores into the Atlantic family was always interesting and stimulating. “I like to make deals,”
he explains.