Then and Now: Concrete advice and service/Not set in concrete

The rental operation that began on a site on King St. (old Hwy. 85) in Waterloo 3 1/3 years ago is distinctly different than the one that stands there today. What developed after considerable “weeding out” and additions of equipment and products was The Concrete Store. It is now a truly one stop  store for all concrete needs. 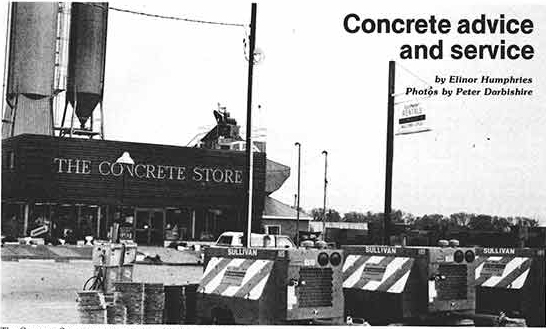 The Concrete Store is a one stop store for all concrete needs. The rental operation that began on a site on King St.

“Running this type of specialty store requires that we continually be on top of any new developments,” says Gerry Heimpel, manager of The Concrete Store. “We’re always on the look-our for new products and equipment that tie in with the name on the front of the store.” Heimpel brings with him 15 years of experience on the equipment side of the business and six years of rental experience.

The Concrete Store is a wholesale, retail and rental store serving both contractors and homeowners. “Our computer system has been programmed to instruct the operator of the cement blending plant on appropriate proportions on the specific job whether it be for basements or driveways. So even the beginner gets the right blend for the job he wants to do,” says Chuck Chambers. Chambers is the counter person for the retail store and is responsible for writing up the orders for the rental section.

The retail part of the The Concrete Store has a crisp clean layout and also boasts an information centre which has brochures and pamphlets on everything from caulking to screeders. The centre also has viewing room for video cassettes which explain installation of interlocking brick, principles of quality concrete or the ABCs of concrete. Jim Barber, who is one of the two salesmen at The Concrete Store explains that product representatives are brought in to give mini seminars. Barber and Glen Wahl spend much of their time talking to general contractors and municipalities to explain the benefits of The Concrete Store.

Harold Bauman has been in the rental business since 1960. He is responsible for the rental operation. “The Concrete Store is the front-line. We’re there for the foundation and from  there we have unlimited opportunity,”
says Bauman.

He advocates renting out quality equipment because it stands up to wear and tear and it makes him credible with the contractor or homeowner. “For example, we retail and rent Kubota engines. The contractors can rent before they buy to prove to themselves how good the equipment is,” Bauman adds.

Bauman sees renting as a “short term purchase.” We agree to buy it back, but if it comes back dirty, it’s theirs. So most of the time it comes back in good shape,” he says.

The Concrete Store was owned by Bill Carter, who also owned K-W Ready-Mix, a long-standing Kitchener, Ont.,-area concrete supplier. Three or four years following our story, The Concrete Store was bought along with the rest of the K-W Blair Ready-Mix empire by St. Mary’s CBM, probably the largest powder company in Ontario.

According to Gerry Heimpel, The Concrete Store’s general manager, the new owners struggled and soon CBM wound up the company,  simply liquidating everything and letting the employees go.

Harold Bauman, who ran the equipment rental side of The Concrete Store, retired following the sale. He has since passed away.

Heimpel left The Concrete Store when CBM bought it, but still drops in to A-Z Rentals in Waterloo, Ont. One of the owners there, Peter Lavigne, was able to put Canadian Rental Service in touch with Heimpel, who is now 82, retired and living in the same home in Waterloo where he has lived for the last 60 years. “I can’t get the farm tractor business out of my mind, so I have some old antiques that I tinker with from time to time,” he says.

After Heimpel left The Concrete Store he helped his son-in-law take over a local construction company whose owner was ill. Heimpel’s son-in-law had apprenticed at the company and had a strong relationship with his boss, and so was given the opportunity to buy the business. Heimpel helped out there for 12 years before retiring.

“I was actually going to retire before that, but being as I had knowledge of the suppliers, I decided to help out,” Heimpel reports. “I was the gofer.” Heimpel helped with creating a parts department, acquiring a building and doing the necessary buying.

“He set up a department with everything for general construction needs and I ran that, doing the buying and running around,” Heimpel remembers.

Heimpel hasn’t worked in the rental industry in decades, but still notes how much everything has changed. He remembers Reitzel and BNR Rentals, and has watched as larger conglomerates have bought them up. “No regrets, things happen,” Heimpel muses. “If you have multiple places to rent equipment and somebody wants to come in a buy the whole thing up, well, why not?”

Heimpel is impressed with what he’s seen at A-Z Rentals, one of the few independents left in the area. “Peter’s done a good job,” he says. “He grew
up with that business. Hell of a fine guy.”

The Concrete Store is a one stop store for all concrete needs.