If you’ve ever attended a festival, wedding, graduation or another type of fun social event in Ontario’s District Municipality of Muskoka – the heart of the Greater Toronto Area’s cottage country for many residents – then it’s possible that you’ve enjoyed the services of Muskoka Party Rentals, based in Bracebridge, Ont. 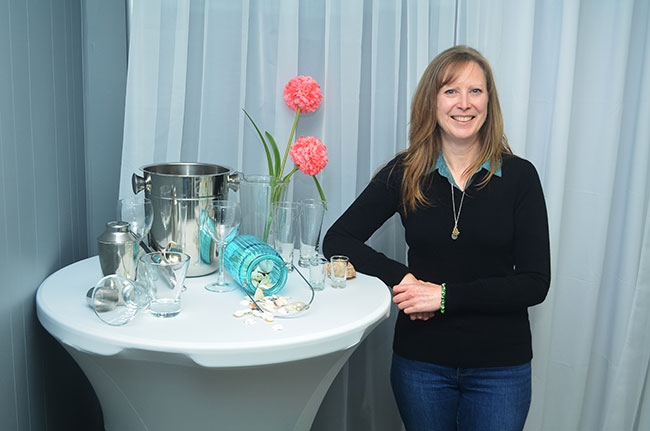 Rixon left the legal world to have fun as a business owner in party rentals. Hard work and a creative spirit has paid off with success in cottage country. If you’ve ever attended a festival

The business has been servicing events in the region since the 1980s. It originally operated under another name before undergoing a couple of ownership changes over its first two decades and finding its way into the hands of Kim Rixon, who took over the business in December 2003 and re-opened it as Muskoka Party Rentals.

“I was working for a law firm and thought it would be a lot of fun,” Rixon says while sitting down for an interview with Canadian Rental Service at her company’s head office.

Like most savvy small business owners breaking out on their own, Rixon started out small, washing the dishes for events out of her home until she had the revenue to rent out a small space in 2004. Since then, the business has grown and flourished.

In 2007, Rixon built a new location for her business, which featured an increased footprint and a linen facility. That facility served Muskoka Party Rentals well for a decade, before Rixon decided it was time to expand further in 2017 and she purchased her current headquarters on Gray Road, which features loading bays and double the square footage of her previous facility.

The company’s success is partially due to its ability to service a diverse number of events. Muskoka Party Rentals’ slogan is “From Tents to Teaspoons,” meaning it is willing to carry out a variety of functions of all sizes. To date, the company has provided equipment for functions ranging from as large as more than 450 people to as small as a quiet dinner for eight guests. To date, the busiest segment of the company’s various activities has been servicing weddings.

“Everyone wants to get married in the Muskokas,” Rixon says. “We do a lot of weddings for camp counselors or people who used to camp up here and met their significant others. More people are looking for something different from traditional weddings.”

The company services a wide variety of events from graduations to baby showers, weddings and many other types of special events.

“We had the Prime Minister of Norway come to visit the Muskoka airport, which is also called Little Norway. We serviced that event,” Rixon says.

“They didn’t want us putting stakes in the ground so we had to truck up big concrete blocks,” Rixon recalls, adding that some event planners have kept her on her toes over the years. “An event planner will do the setup, but a lot of the time we have no idea who the customer is, so we have to just go and do the best we can for them.”

At another occasion, a few of Rixon’s staff members were asked to go set up tents for a private party in the Muskokas, and they were very surprised when they knocked on the door of the host’s cottage.

“Darcy Tucker, I think it was, and another Maple Leaf had rented a tent. Darcy Tucker had answered the door in a towel.” Rixon recalls, adding that her staff called her immediately afterwards, over-the-moon excited to tell her about their encounter with the former NHL player. “They kept saying, ‘Why didn’t you tell us that’s who lives here?’ But I had no idea.”

Changing seasons
Although keeping up with the current trends can be challenging at times, Rixon’s biggest ongoing challenge has been managing employee retention in a seasonal business, which typically runs from May to October.

“A lot of the kids who vacation up here in the summertime are looking for work,” she says, adding that she also hires a good number of local young adults who go to school in other cities but come home to spend time with family and friends in the summers. “I have people who seasonally come back three and four years and they’ll often bring their friends.”

This works out well for the summer months when colleges and universities are not in session, but once fall comes it can leave Rixon trying to fill some serious gaps in her roster.

“Our September and October is starting to get busier so it’s getting more difficult to train summer staff,” she says.

Often this has left Rixon taking up the reins for a variety of tasks in addition to running the business – from driving the service trucks to putting up tents – since she is the most knowledgeable person at the company for all aspects of the business. During the busy season last year, Muskoka Party Rentals hired 26 seasonal employees.

One way she has been able to counter some of her hiring challenges has been through bringing on staff who don’t mind the work being seasonal, and by hiring older people looking for a little work during their golden years. Another way Rixon has learned how to free up her time is by hiring a manager to oversee the employees, which she did for the first time last year.

“I can now go out and talk to my hotels and resorts. It takes time off my plate to deal with other things,” she says.

Rixon left the legal world to have fun as a business owner in party rentals. Hard work and a creative spirit has paid off with success in cottage country.

Staying active
Muskoka Party Rentals is very active within Bracebridge and the other Muskoka communities. The company regularly helps out local non-profits such as the Bracebridge Chamber of Commerce, the Rotary Club Bracebridge, Big Brothers Big Sisters of Muskoka and many more.

“We do a lot in our community,” Rixon says.

She is also very active within the rental industry’s associations. Currently the past-president for the Canadian Rental Association (CRA) Ontario, Rixon has also served as the local’s president, first and second vice-president, and secretary. She also sits as a director on the national board for the CRA.

During her time on the provincial and national boards of the CRA, Rixon has helped boost the American Rental Association’s new initiatives for the industry in Canada, including a young professionals network and the Women in Rental Initiative.

“The last few years I’ve hired women for tent installations and we’ve just hired a lady to start with us this season that is between 50 and 60 years old,” she says. “I’m really excited about Women in Rental getting off the ground and getting women interested in how things are going. When I started it was me and a bunch of guys, but now I’ve noticed a shift – there are four women on the [CRA] Ontario board.”

When asked what advice Rixon would give women considering a career in the rental industry, she says getting involved in the industry associations and touring other rental businesses are keys to success.

“Definitely become an active member in the rental association. It’s there to help you with your business so take advantage of the programs,” she says. “Travel around and see other rental houses if they’re not your direct competition. They’re so helpful.”

Rixon says any rental houses, no matter what industry they’re servicing, can provide people with great ideas for their own businesses. She says that some of the great ideas she got for her own business came from touring an equipment rental business in no way affiliated with the events sector.

“I got to wander around his shop and got so many ideas. I’ve done it a number of times,” she says. “You can always find something that you can bring back to your own business.”

If you ask Rixon if she regrets leaving the law firm to pursue running her own business, you will get a definitive “No” as her response.

“I love owning my own business, and seeing what started out as a bunch of stuff in an abandoned grocery store turn into a successful seasonal business,” she says.

Back in 2013 when the CRA Ontario was holding its annual members meeting in Sudbury, Kim Rixon was elected to the board of directors for the first time along with colleagues Colin Wilson, owner/operator for A World of Rentals in Kingston; and Gord Ellis, Ontario business development manager for Cavalier Industries. Both Wilson and Ellis had nothing but good things to say about working with Rixon since that time.

“Kim has been an integral part of things getting done since 2013 when she got on the board,” Ellis says. “She supported a lot of initiatives that Colin and I have brought forward, and she has brought forward other initiatives. CRA Ontario has benefited greatly from Kim bringing forth her experience.”

“She’s great to work with, always willing to lend a hand,” Wilson adds. “She’s definitely one of the most active people on the board, always helping out on all the committees. She’s been a great help to the association.”

Ellis was reminded of a recent tweet from Warren Buffett when thinking of Rixon. “‘Surround yourself with people that push you to do better. No drama or negativity. Just higher goals and higher motivation. Good times and positive energy. No jealousy or hate.’ That sums up what Kim Rixon brings to the CRA Ontario board, she brings out the best in all of us,” Ellis says.