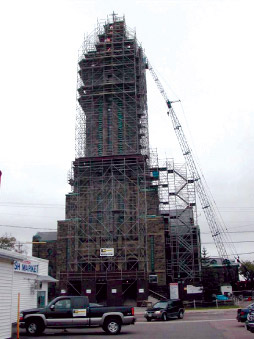 July 11, 2014 - Safway Services Canada has announced that it has acquired Nel-Tekk Industrial Specialties Inc. With headquarters in Sarnia, Nel-Tekk currently serves Nanticoke, Sarnia and the southwestern Ontario region and provides a range of insulation-related services including removal and re-installation of all types of insulation systems; asbestos, mould and lead abatement; identification surveys; insulation system and covering inspections; and installation of fireproofing, fire-stopping and smoke-sealing systems.

“Nel-Tekk is a great fit for Safway Canada,” says Steve Wilson,
president of Safway Canada. “Nel-Tekk and Safway have similar operating
philosophies with a passion for developing a culture of safety,
understanding customer needs and exceeding expectations.”

Nel-Tekk was founded in 1987 to serve the Imperial Oil site in
Sarnia. Nel-Tekk has completed thousands of insulation and abatement
projects of all sizes, including numerous routine maintenance, capital
projects and large, major shutdowns and turnarounds. Recognized for
their expertise in the industrial sector, Nel-Tekk also has experience
in commercial and institutional construction. In addition, Nel-Tekk has
established an outstanding track record in safety, with no lost time
injuries in more than 25 years and more than 2.5 million man-hours
worked safely.

Nel-Tekk will provide Safway with 27+ years of IAF (insulation,
abatement and fireproofing) experience and expertise,” explains Mike
Guerette, manager of Nel-Tekk. “We look forward to being part of Safway
Canada and continuing to grow to become the clear leader in scaffolding,
access, insulation and coatings, and supporting the delivery of
seamless SIP (scaffolding, insulation and painting) and multiservice
solutions in our area.”

As part of Safway Canada, Nel-Tekk employees will continue to provide
insulation and abatement services at the Imperial Oil site in Sarnia.
By the beginning of 2015, a Safway Sarnia Branch will be established at
the current Nel-Tekk site in Sarnia, offering a full range of access and
industrial services including scaffolding and related products;
professional engineering; project management and coatings, as well as
mechanical insulation; asbestos, mould and lead abatement; and
fireproofing. “By working together, we can deliver superior performance
and customer service, as we grow and excel in today’s marketplace,
creating the best multiservice company in Canada,” concludes Wilson.