Rise of the Robot: The present and future of automated construction equipment

Hasta la vista, operators? Not yet. 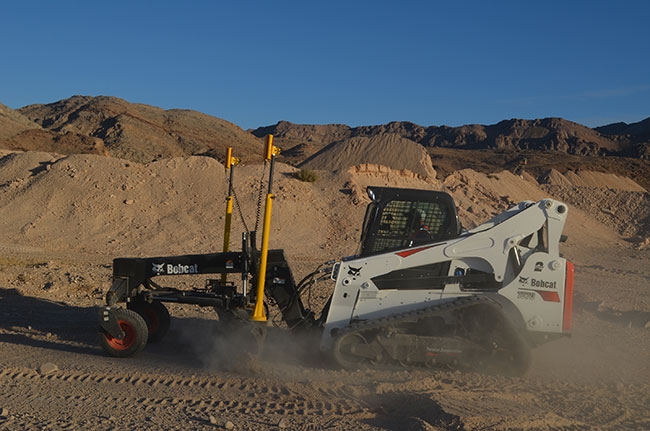 It’s been decades since the original Terminator movie launched, scaring people into thinking an army of autonomous machines would soon be knocking down their doors and taking over the world. A funny thought when you take a look back at the “advanced” technologies that existed in 1984 (the original Nintendo game console hadn’t even been released yet). Although we are far closer to creating these types of fully autonomous machines for many aspects of our lives than ever before – and some autonomous machines are in their testing phases – the construction equipment world isn’t quite there yet.

“We’re not seeing autonomous technology because autonomous implies decision-making and no operator input, where machine automation is what we’re doing in construction now. There is still always an operator there,” says Kyle Burch, Canadian national sales manager for Leica. “Autonomous is a catch word, and they’re working towards autonomous cars and such, but really it’s machine automation in the construction world at this point.”

Scott Crozier, general manager for Trimble’s civil engineering and construction division agrees that the industry isn’t quite there yet, but that it’s definitely the direction the industry is headed towards.

“At the moment, full autonomous machinery, or an autonomous machine in construction doesn’t exist outside of proof of concepts, prototypes and demonstrations,” he explains. “I think what is happening is levels of automation of machines are increasing, which is tipping towards an autonomous solution. The autonomous machines that do exist have been done underneath a manufacturer’s guidance as proof-of-concept type solutions in the development process. We’ve seen that with compactors, dozers, excavators and skid steer loaders.”

Crozier says that autonomous machines should not be confused with remote-controlled machines.

“A remote-controlled machine is man-less, but someone is operating every element of it remotely,” he says.

Trimble is currently working on autonomous technologies for dozers and compactors. Prototypes were on display at the Trimble Dimensions user conference last November in Las Vegas, Nev.

“That was really the first demonstration and, of course, the next step is going from demonstration to something that is purchasable by a customer,” he says, adding that Trimble is currently working with OEMs developing aftermarket solutions that will be designed to work with specific machine makes and models. “At this stage we have our machine control and hot swap technologies. We automate elements of machines, but we do not remove a man from the machine today.”

Although truly man-less machines are not available in the marketplace today, Crozier says they are definitely coming to market in the near future.

“You can expect to see them in the coming two or three years. You’ll see these types of solutions delivered into the market that are purchasable by customers,” he says. “It’ll start with incremental elements that will continually improve the level of automation on a machine and then will get to a point where there’s a perception system that means the machine is safe to stop if it identifies something that was unexpected, and that machine will stop and wait for some user interaction that will be local or remote – not on the machine but monitoring the jobsite.”

Rental opportunities
As new autonomous technologies make their way into the construction equipment market, there will definitely be new opportunities opening up for rental equipment houses, according to Crozier.

“I do see the rental companies as being a good path for contractors to get started when the technologies become available,” he says. “Renting for the right project is a good path to get started in using this new technology. You don’t have to have full commitment, you get to trial it out and see if it works for you for your specific kinds of projects without necessarily having a significant investment up front.”

One type of equipment with increasing demand for automation is excavators. Burch says one of the biggest changes that Leica has seen happening in the Canadian marketplace is the move towards more excavators with automated features.

“That’s really happened more in Canada than in the States. I know what we sell in the U.S. and in Canada for machine breakdown, and most of Canada is a heavier excavator market than the U.S.,” he says, adding that Canada in the last five years has been moving to more automation in excavators than dozers. “Originally people would put automation in graders because it was a finishing tool, then it moved over to the dozer – it was easy to visualize for people – now it’s excavators.”

One example of increased automation in excavators is the increased adoption of automated tilt rotators.

Pre-wiring equipment so it can be outfit later with automated features, and other upsell opportunities when the demand is there, gives rental houses additional opportunities to rent out their fleets, Burch says.

“There’s potentially a premium there and the potential to not lose out on business,” he says. “If you get spec’d for a GPS dozer and you don’t have a GPS dozer, for example, not only do you not get the premium for renting the GPS, you don’t get the rental for the dozer itself, so it might be sitting in the yard.”

and other upsell opportunities when the demand is there

To help with this transition, Trimble has SiTech, a construction technology distribution partner that has been trained and has the experience in supporting industrial technologies on construction sites.

“So potentially you would then have a provided supplier being the support for the rental house,” Crozier explains.

One step at a time
As we move towards a more autonomous future, Crozier says the key thing to remember is that there will be a progression of the kinds of tasks machines will be capable of, and a progression of workflows on a jobsite.

“So when machines are interacting with each other – like an excavator interacting with a truck, dozer or compactor – there will be a continuing evolution of capabilities for autonomous machines,” he says, starting with basic machines with basic applications moving to complex workflows. “You’re not going to have an autonomous excavator [first time out] where you can give it some plan and then it knows exactly how to do it. It will be able to load a truck, or dig a trench, or do these very specific tasks.”

Burch agrees that the steps taken towards full autonomy at a jobsite will not be rushed due to the nature of the work being performed.

“Construction sites are a dangerous place,” he says. “In order to have more autonomous machines, you need to have everything on the jobsite accounted for. You’ll start to see wearable technology for construction workers so machines are able to sense where they are. It will become the norm.