Battery-powered equipment of any size, from screwdrivers to tractors, is becoming more common in every sector of our economy. One of the drivers in advancing battery technology of all kinds is the desire to replace fossil fuel-based energy (diesel and gas engines) with cleaner energy (renewably powered electrical engines). 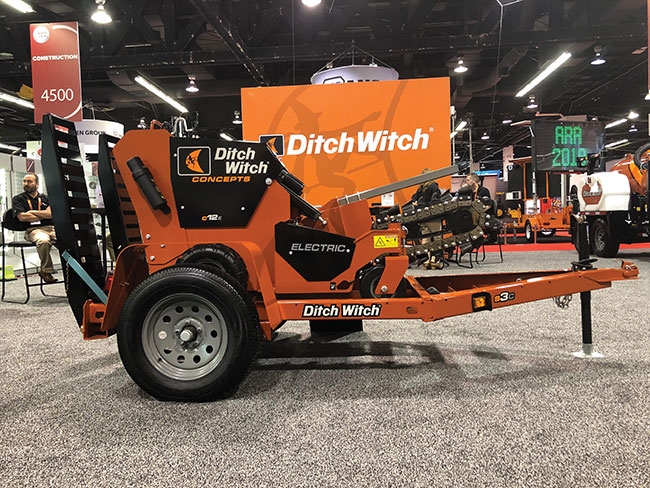 Ditch Witch product manager, Chris Thompson, points to Europe as a hotbed for battery development, where both subsidies and regulations have spurred R&D. Now, he says, interest in battery-powered equipment is “expanding rapidly all over the world.”

For customers of rental companies, battery-powered equipment provides a number of benefits. Obviously, first of all, it’s more convenient than equipment that has to be fueled up or powered by electrical cords (as long, however, as recharging is easy and isn’t required too often).

Battery-powered equipment can also shine in the rental industry, says Thompson, because it’s “very quiet, so customers can use it during hours when noise restrictions are in place.” Fred Paul agrees. Battery-powered equipment, says the sales and engineering manager at Wacker Neuson, can be used not only on projects with strict noise guidelines such as hospitals, schools and residential areas, but on projects where there are emissions restrictions or require a non-spillable fuel source (risks abound with onsite storage and handling of diesel and gas). With the increase in more battery-powered offerings, Paul predicts that “rental companies will gain greater access to interior construction or indoor renovation projects and poorly-ventilated areas including trenches and tunnels.”

Rental companies, he adds, can also market these machines as extremely simple to operate. In addition, the maintenance-free electric motor dramatically reduces service time, contributing to the low cost of ownership.

Indeed, Jon Williams believes rental companies will see much higher rental revenue from battery-powered equipment in comparison to that which uses gas or diesel. “It has a higher purchase price but a much lower operating cost,” explains the CEO at Green Machine Company, which designs and builds patented lithium-ion-powered drive systems and markets battery-powered products in the construction market under its own brand (the Green Machine light tower and two mini excavators) and other brands.

For all these reasons, interest in battery-powered equipment in the rental industry and beyond has risen sharply. “Everyone asks us about it now,” says Thompson, “whereas five years ago it was a novelty.”

Battery evolution
Historically, lead acid batteries have been the industry standard for battery-powered construction machines, but Chad Hislop, senior director of product management at Genie, notes they have lots of limitations, including power output, charging speed and battery life. He says now, due to R&D and use in the automobile industry, lithium-ion batteries have dropped “considerably” in price and are starting to become “a viable solution” for aerial work platforms.

Hislop uses the word “significant” to describe the number of charge cycles a lithium-ion battery can achieve over its lifetime, in comparison to a lead acid battery. “Initial testing we have performed shows these batteries could last longer than seven years in a product like a slab scissor lift,” he reports, “as opposed to the typical two- to three-year life of a lead acid battery in a rental situation.”

In terms of run times before charging and how long charging takes, two companies weighed in. Ditch Witch’s prototype trencher can run for about four to five hours, then be charged over the lunch break and used again before charging overnight. Green Machine’s lithium-ion pack size is 100 kilowatts, which allows all their machines to run a full shift with a recharge time of six to eight hours.

What’s best and why
Which pieces of equipment are best suited to battery power is “a really big question” for the industry right now in Hislop’s view, and at this time all that he and other experts can do is speculate.

“In the past, we were really limited by the power output of the battery and total power density of the battery,” he notes. “It was tough to match a 58-kilowatt diesel engine [in that equipment size category] with lead acid batteries. They simply could not charge, store or dispense power at the rates our large aerial work platforms needed to meet the required duty cycles. As we see in the auto industry, these established barriers are breaking, and we can expect to see electrification of machines we never thought possible before.” However, Hislop cautions that creating lithium-ion battery-powered equipment has to be done for the right reasons. “Doing it just because we can isn’t enough,” he says. “Like the slab scissor lift example, true adoption will happen when it brings more value to the owner or user of the equipment.”

Thompson notes that with compaction equipment and on skid steers there will be a bit of added weight due to a large battery, but at the same time battery technology is getting smaller.

In Williams view, compact equipment will be the first focus, given that the demand for battery power has stemmed from avoidance of noise and emissions which are most pronounced on congested work sites with lots of workers. He adds that any machine platform that is powered hydraulically will be most simple to convert to a battery-powered version, along with any machine platform that uses up to an 80-horsepower internal combustion engine.

Paul agrees that we will begin to see a variety of light to compact battery-powered construction equipment options in the near future. He adds that the number of these products, no matter the type, “will increase as long as the battery fits within the package and delivers the necessary power to run the product for an entire shift with minimal down-time for charging.”

it’s a battery-powered trencher. Advances in the amount of power lithium-ion batteries can store and deliver are making them feasible in applications never before thought possible.

Selection and maintenance
For his part, Thompson expects that maintenance of battery-powered equipment won’t be as high as their diesel/ gas-powered counterparts. “The terminal connections would have to be maintained,” he says, “and the battery checked periodically to make sure it is holding a charge.”

Hislop advises following the manufacturer’s instructions closely for use and maintenance, as makers of this equipment have designed and tested it based on those recommendations. “Make sure to take the maintenance of the batteries seriously,” he says. “Leaving them at a low state of charge or letting things like the water level get low can have serious effects on life of the battery and performance of the machine. Charge profile matters, depth of discharge matters and whether the battery sits for a long time full or empty matters.”

As a first step in selection of battery-powered equipment, Hislop suggests that rental company owners make sure to choose that which carries the best brands of batteries and chargers. “Aftermarket or off-brand replacements don’t always offer the same level of performance or longevity,” he notes.

In Paul’s view, rental company owners should proceed with selection of battery-powered equipment as they would with any other purchase.

“Know your customer base and local market conditions,” he says. “Rental companies in areas where considerable interior renovation work is scheduled will be sure to benefit by adding battery-powered light equipment to their fleet, and increase their appeal to contractors who perform that work. Battery-powered products offer less complexity than engine-driven products so they will be a hit with the DIY weekend warriors too.”