There’s a common perception that trying to bring a new generation of entrepreneurs in the rental business is a tough gig. But the young president of the Quebec rental association, the ALQ, is setting out to do something about it. 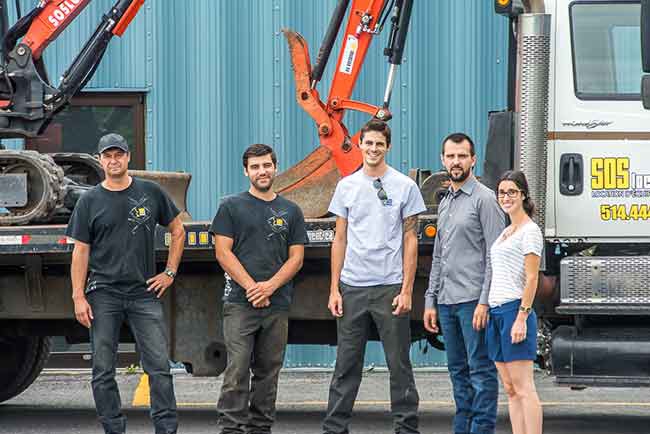 Brisk growth has allowed SOS Location to bring on seven permanent employees plus seasonal helpers. Here from the left are Jacques Gilles

Simply by judging from the tone of his voice and his jovial demeanor, 30-year-old Philip Lavigne would be hard-pressed to hide his passion not only for the rental business, but especially with entrepreneurship. A native of Chicoutimi, located 200 kilometres north of Quebec City along the shores of the Saguenay River, Lavigne is the owner of SOS Location in St-Jean-sur-Richelieu, Que. First a joint venture with his wife, their shop has been growing ever since and only seven years later he now employs several full-time employees to run the business – seven during the winter, twelve during the summer. His wife is still involved in the business. And while he doesn’t necessarily want to describe it as an “expansion,”  SOS Location still is becoming larger as time goes by. “We just moved to a new location to better suit our needs,” Lavigne says of his new shop. SOS Location offers not only equipment rental services, but also a wide range of other services such as transport, repairs and also the sale of equipment and parts and training sessions for operators in order to make the use of equipment safer. These sessions are offered individually or in groups, adapted to specific needs.

With a little help from an “angel”
Like so many other business owners, the passion for being an entrepreneur runs in the Lavigne family. “I come from a strong business-oriented family background,” Lavigne says. “We owned a string of businesses in Saguenay.” And in Lavigne’s case, mechanics is what has always made his heart tick. “I just love tinkering with machines,” he says. Then after a few years (almost a decade) spent working as a mechanic for other companies including rental service shops, a once-in-a-lifetime opportunity arose, this one coming from within his family’s close circle. “We have a friend in the family who lent me all the money I needed to start my own business,” Lavigne explained. He refers to the friend in question as an “angel,” a term also frequently used in the venture capitalist world to describe those investors who take a huge amount of financial risk to help young start-up businesses with the needed resources to give birth to their projects. But unlike those investors who wage their money against a promise of quick growth and profit, in Lavigne’s case, there was no such tremendous, soul-crushing pressure that leads so many of these startups to collapse or their creators quickly selling their dream. His angel was way more, and different.  “He told me that I was allowed to make all the mistakes I needed to make and he’d always be there,” Lavigne said. This allowed him to learn the ropes while not stressing about having to repay a debt that can quickly become a burden too hard to bear.

According to him, there are so many perks to being not only a business owner, but also to be operating independently. “At first I considered going the franchisee way, but one thing truly made me think twice before signing up,” Lavigne recalls. “The main problem with operating a franchise, for me, is the huge number of constraints. You have to do things and operate according to the chain’s standards and practices, with almost no room for initiative. To me, this is not what being an entrepreneur should be about – there should always be room for initiative, to improve things at your level. As a franchisee, you might as well go work as an employee. It clearly wasn’t for me.”

But for Lavigne, owning and operating a rental business was only the beginning. As a way to make it easier for young entrepreneurs like himself, he is determined to pay it forward, inspired by his own experience. He wants to become an angel himself.

Brisk growth has allowed SOS Location to bring on seven permanent employees plus seasonal helpers. Here from the left are Jacques Gilles

The importance of coming together
Lavigne is completely aware of the many challenges a rental business can face, drawing wisdom not only from his own entrepreneurial experience but also as president of the ALQ, a position he assumed in 2015, four years after joining the association. He also sits on the national board of the Canadian Rental Association as the representative for Quebec. The fact he swiftly joined the ALQ only about two years after starting SOS Location is a testimony to his commitment to a most cherished principle: only through coming together can individuals and organisations thrive. As an example of this, Lavigne points to the benefits his business has realized by attending trade shows. “To me, attending these shows gave me the opportunity to meet people who eventually became great mentors,” he explains. Also, getting involved with the Canadian Rental Association forced him to crush language barriers and learn English, something that was quite hard to achieve growing up in Saguenay. “It sure made that Netflix subscription worth the money,” he jokes.

As mentioned, rental businesses face many challenges, one of the biggest being funding. “Unlike other businesses like car dealerships, rental businesses don’t have access to a wide range of options when they go to the bank and ask for a loan,” Lavigne says. But equally tough to deal with is the difficulty to convince young entrepreneurs to get into the rental business. During last year’s edition of Quebexpo held in Laval, Que., this writer couldn’t help but notice the average age was quite high while browsing through the show’s alleys. This generational gap, like any, can be a source of present and future problems, including a decrease in corporate diversity as independently-operated shops are bought by rental industry giants. But Lavigne is determined to make things right, starting at the local level. “I have much more leverage as the president of the ALQ to help make things better and encourage young people to get into the business,” he says. He started to foster a few initiatives last year. “I organized a breakfast meeting for young entrepreneurs at last year’s Quebexpo.” That success has led him to continue to look for the best, most effective way to make young people jump on the rental business bandwagon. Lavigne has found many answers and inspiration south of the border. “The American Rental Association sets a good example”, he says. Referring to the ARA’s Young Professionals Network, a program that aims at making the rental business sexier and more dynamic to a younger generation of entrepreneurs. The Network’s mission, according to the website, is to help young entrepreneurs learn about the industry, advance their careers and establish relationships that will not only help them grow personally and professionally but also ensure a vibrant industry for future generations. It targets people 18 to 40 years old. The Young Professionals Network also offers members access to privileged perks and services, including exclusive access to the network’s events such as an annual networking reception at The Rental Show, “40 under 40” networking receptions and details about The Rental Show’s seminars geared towards young professionals. Members also get access to an online directory that regroups contact information. Membership to the network is free. The ARA has also realized the potential of internet-based initiatives to attract the younger generation, offering educational tools delivered in the form of webinars and on-demand videos on its website. Lavigne became a convert to the ARA’s approach when he was one of the few rental operators in recent memory from Quebec to attend an ARA Leadership Summit in Chicago.

Under Lavigne’s leadership the ALQ has is hosting a list of events to provide a wide range of opportunities aimed at attracting young entrepreneurs – golf tournaments, inspirational conferences (a recent one hosted by former Montreal Canadiens head coach, Senator Jacques Demers), and even rodeos held in Levis, Que.

Lavigne’s goals and ambition can’t be denied. Where will those take him? How will he achieve them? Still a tough call, according to him. Challenges lie ahead. But passion is a powerful motivator that steadfastly pushes forward those who embrace it.  Certainly, everything is on the table and he will keep on brainstorming ideas on how to rejuvenate Quebec’s and Canada’s rental industry.

“To be continued,” Lavigne says.