Nov. 16, 2017 - The final CRA Ontario meeting of 2017 was graced with some new faces among the old at the Wacker Neuson facility in Mississauga, Ont., yesterday. Representatives from Hertz, Home Depot and an online rental provider rounded out the group of about 50 attendees. 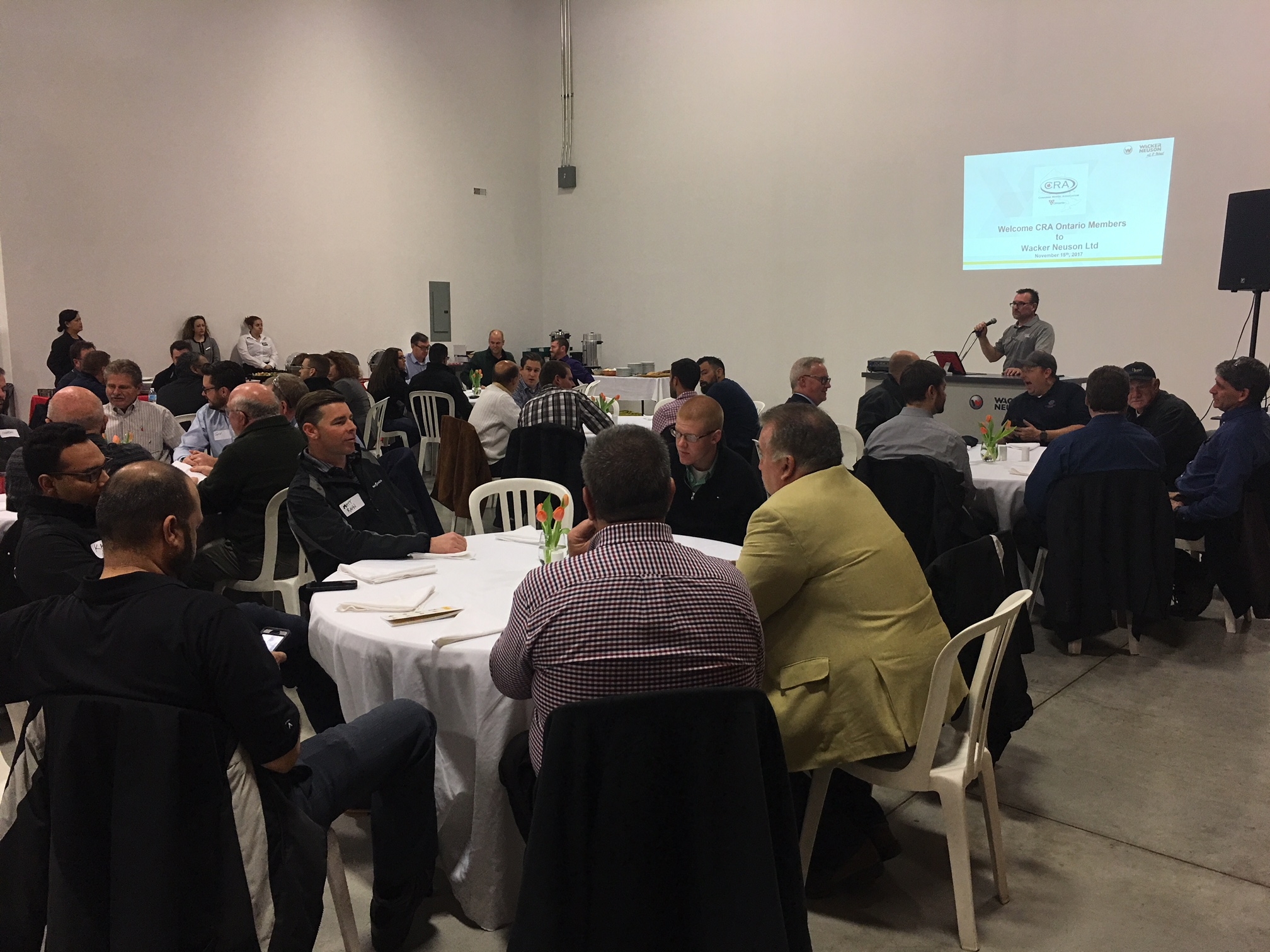 Kashif Safdar, eastern Canada district manager for Hertz ProSolution division, said he thinks it’s important for his organization to get out into the various communities they serve to keep up the company profile. There were six Hertz employees at the meeting.

Wacker’s Dean Nasato hosted the evening as the group gathered in the clean, spacious warehouse to network then sat down for a buffet dinner and a presentation from the Canadian Federation for Independent Business’ Mike Kirwin and Ryan Mallough. Kirwin and Mallough spoke about federal and provincial issues of concern to Ontario small business, including the $15 minimum wage, which their research suggests could kill 50,000 jobs in Ontario.

Kirwin and Mallough discussed changes to labour regulations that will allow employees to take up to 10 “personal emergency days” – two of them paid – in addition to any sick time the employer provides. These days can be taken whenever the employee wants with no obligation to provide a doctors note or other justification of any kind, according to the proposal. Mallough’s recommendation, should the measure become law, was to immediately change the language in company policies to identify sick time as personal emergency time to avoid having to add the days to time already provided.

They also warned of measures to enforce equal pay for equal work, meaning employees with the same experience and qualifications who are doing the same job must be paid the same. Obviously this is only fair, but it could limit employers’ ability to temporarily put higher-paid employees into job functions that pay less, or to use part-time staff.

Mallough also warned of government plans to hire more than 100 new employment standards officers who will be tasked to pay surprise visits to companies and apply a zero tolerance approach to any infractions seen. Not having the current employment standards poster up in the break room could attract an immediate $300 fine instead of a warning.

Aside from lobbying, CFIB provides many advisory services and member benefits. Kirwin gave one example regarding family members working in the business. Many stores deduct EI premiums from the paycheques of family members. But most family employees are unable to collect EI, and therefore cannot be legally required to contribute. The CFIB assists small businesses to get the confirmation from the government that their family members cannot collect, and then assists them to recover payments made going back as long as 3.5 years.

Another significant benefit is the reduced Mastercard processing rates available to CFIB members, which are on par with the rates Mastercard gives to the world’s largest retailers.

Based on a show of hands, most of the rental stores in the room were members of the CFIB. Several spoke passionately about the organization and how it has helped them.

The next meeting will take place Jan. 17 at Higgins Event Rentals in Toronto.