It’s not every year one gets to celebrate the 10th anniversary of one’s own business. But Lift Services Inc. has been giving Windsorites a boost for the past decade, as of this upcoming August. 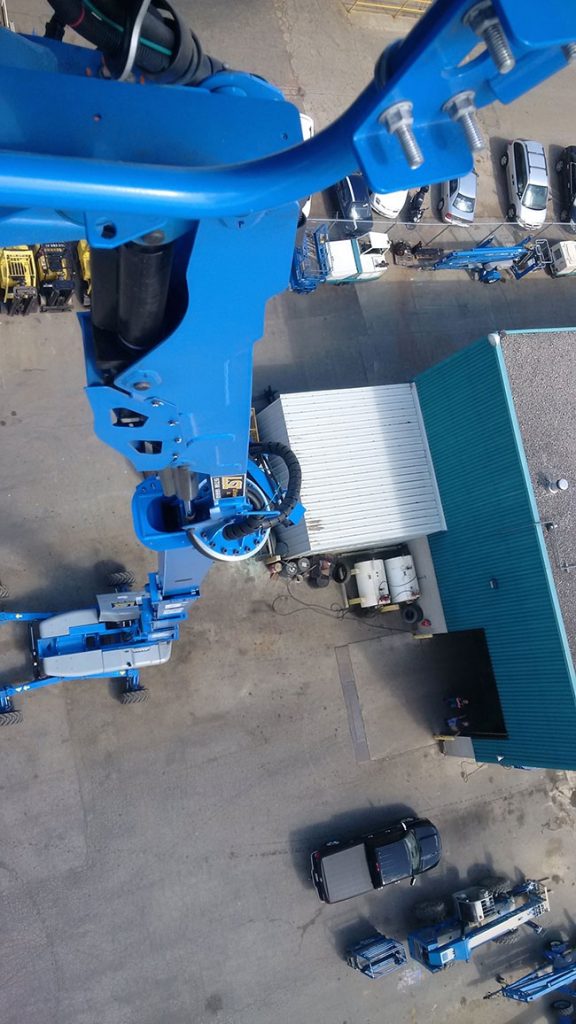 Looking down from the top of a 80-foot boom is not for the faint of heart. It’s not every year one gets to celebrate the 10th anniversary of one’s own business.

Bob Gross is the man behind LSI. When he first got into the rental industry back in 1989, little did he know that one day he would be in the high-altitude aerial business.

“I’m in the aerial platform business and I don’t even like heights,” he said.

It was fairly early on in his career in rental that Gross decided he wanted to specialize in the aerial side of things, as well as covering other niches, such as forklifts and industrial cranes. He had managed the startup of another company in 1992, which was sold to another firm, which eventually became part of NES Rentals. That lasted until NES decided to get out of Canada.

“In 2005, NES, who was just coming out of bankruptcy protection, they shut down their Canadian operation,” said Gross. “I knew it was still a very good potential market, especially with my history with the automotive plants. I had a good base to start off with and teamed up with our sister company, KMJ Machinery Movers. It melded together very well.”

Along with KMJ, LSI has a sister company relationship with the design-and-build firm Matassa as well as KMJ Machinery Transport. For training and safety education, LSI has aligned itself with local company Majors McGuire.

Today, the LSI headquarters is located just south of the Windsor Airport and within a short drive north to the Ambassador Bridge to Detroit. It deals in both new and used equipment as well as renting out pieces from their vast collection. The side of their North Talbot Road building boasts both LSI and KMJ signs.

Gross keeps a fairly trim business himself, with fewer than 10 employees. He’s got an assistant, a technical sales representative, several mechanics, a yardman, a tractor-trailer driver and himself. LSI isn’t exclusive to just Windsor. It serves Chatham, Leamington, London and Sarnia, as well, but has been known to go further afield. LSI has found a niche for itself in the southwestern Ontario as one of the only independently owned aerial and lift specialists in the area.

Gross himself is originally from Brampton, Ont. He lives in Windsor with his wife, who works at the courthouse downtown. His four grown boys are very much Windsorites, even in their hockey loyalties. Like a lot of people from the area, they cheer for the Detroit Red Wings, whereas Gross remains a Toronto Maple Leafs fan. It remains to be seen where Gross’ seven-year-old grandson’s loyalties will eventually land.

Of course, every business is, in part, sculpted by their local economy. Windsor’s economy has been up and down for the past few years, often tied to the status of the automobile industry. But there are other things happening in the area that Gross has tapped into, like the wind farm industry and the DRIC (Detroit River International Crossing) project. Many of the larger projects that happen in the area mean a demand for rentals. Enter LSI.

And because of his connections (Gross often uses the word ‘connections’), there are other gigs that come up for LSI, too.

“Again, because of connections, I’ve been able to do work for Samsung throughout the Future Shop chain (before they closed) from coast to coast, from Newfoundland to Vancouver Island,” he said. “We arranged all the rentals for them (for setting up their displays).” Another high-profile event for LSI was the RedBull aircraft races, where the company supplied lift rentals and organized trucking in and out.

So, cars. When one talks to Bob Gross, you realize that he’s pretty deeply in tune to the cadence of the auto industry, with its schedule of plant re-toolings and re-openings, and that it’s all become part of his business’ circadian rhythm. It’s a natural fit for Gross, who has an interest in classic cars himself. His pride and joy is a 1969 Chevelle SS. LSI’s big clients are generally Ford and Chrysler and the company has done some work for Toyota in the past, too. Then there are all the suppliers and parts manufacturers, like Nemak, with which LSI has also done business. Whenever the auto executives determine a new use for a factory, or even just decide that they need to change things up in a facility in order to manufacture a new model, that means a change is in order, things need to be moved and machinery needs to be brought in. Every one of these renovations means a demand for rentals and that means business for LSI.

Looking down from the top of a 80-foot boom is not for the faint of heart.

“There’s not a lot of building (of new buildings) going on, but because of the re-tooling of the Windsor minivan factory, there’s a lot contractors working there,” said Gross. “That’s been going on since the second week of February and won’t be done until after the long weekend in May. Then there’s another shutdown in July and another in December.”

Gross had just been about three years into LSI when the 2008 economic downturn hit and, as was well documented, it hit the automobile industry particularly hard.

“It wasn’t smooth going in the beginning with (the downturn),” said Gross. “We lost the GM transmission plant but a lot of things fell into place and it worked out really well.”

As to why LSI has been able to assert itself so well with the auto companies, Gross says, “they know what we’ve got to offer them, they know that they can count on us and they know we can find them the odd equipment that no one else can. Like 100,000-pound forklifts.”

General Motors has gradually downsized in Ontario in recent years, while Ford and Chrysler are still contributing to the local economy. To get a sense of how deeply immersed his business is with the local plant refurbishings, Gross drops a couple of numbers.

“I have 260 pieces of equipment there on the Chrysler site, including 40 golf carts,” he said. How does he keep it all straight? “I’ve got a good computer system and a good team of people.”

Gross also sees himself as a bit of a pioneer in the aerial sector in his part of the world.

But, of course, it’s not all just cars. The 180-foot booms are important for another reason, besides their height. They are specifically designed for Ontario’s burgeoning wind farm industry. Gross tosses the figure of “180” out fairly casually. When you get a chance to see even a simple picture of exactly how visually far off the ground a 180-foot boom is (or what the ground 180 feet away looks like from a fully extended platform), you may gain a new respect for people who actually operate the things.

Said Gross, “Because of our connections, last year, we had seven 180-foot booms out in the southwestern Ontario market, working on wind towers.”

Then there are sales, too, though that is only a corner of his business. “We are representatives for Genie, JLG, Skyjack, Snorkel and Starke,” he said.

Gross says that his business is about 90 per cent rental and 10 per cent sales.

“People want to rent. But when people realize they can get pieces that are serviced, why buy? It’s too capital intensive.”

As for his company’s tin anniversary, Bob has been too busy to think about preparing anything at this point.

“I’ve been so busy, and haven’t had a chance to do anything for it,” he says, which isn’t a bad problem to have, after all.