Infinite Event Services’ chief events officer Sheldon Fingler remembers the day 15 years ago that he decided to leave the world of “real jobs” to run his own DJ’ing company. 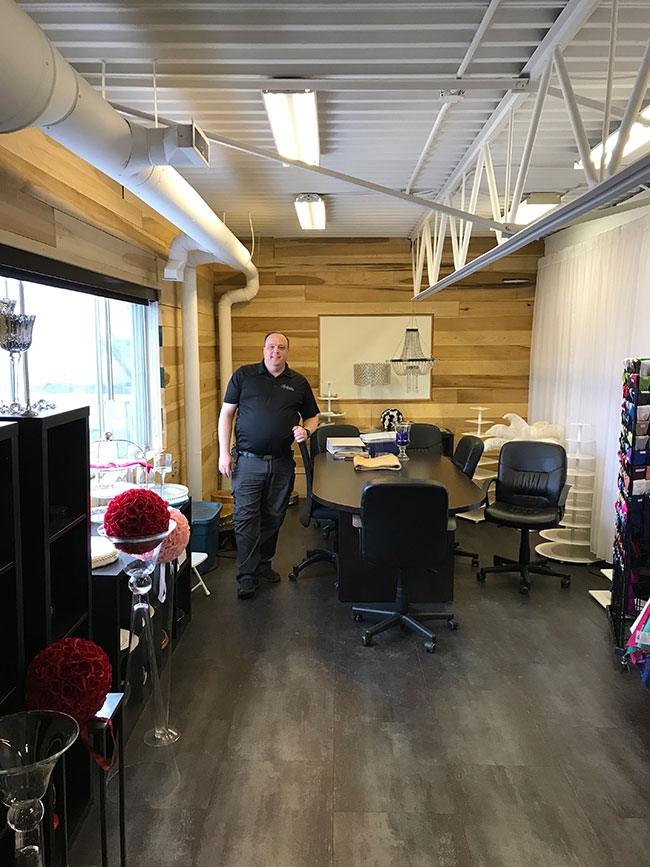 “I’d been DJ’ing for about 15 years already, while also working for organizations and clocking in and out every day. After re-evaluating my life, I decided to make a change and start my own full-time business,” he says. “I remember phoning my wife from my flip phone and saying that I was done working for other people.”

At the time, Fingler’s wife was not working, they had a young son and bills to pay.

“I was the breadwinner and we had lots of stress on us what with a mortgage and vehicle payments. It was an odd time to branch out and start doing my own business full time. Most people wouldn’t take that chance with someone in diapers in the house.”

Despite that, Fingler’s decision became the catalyst of an evolution – one that that saw him morph his business from offering one sole service into a full-fledged, single-source event equipment rental company in Edmonton.

Exponential growth
When Fingler first began working full time as a DJ, clients began asking him to provide additional audiovisual support for different events.  “Meanwhile, I also started hearing complaints from clients about how event rentals were so expensive and how certain companies had poor service and were hard to deal with,” he remembers. Sensing a business opportunity, Fingler began collecting items that were popular rentals for events. “We started with some chair covers and a backdrop, just running the business out of my house, but it quickly grew to the point where our living room was packed from almost floor to ceiling in chair covers and sashes,” he says. “Our garage was getting fuller with equipment, and then my parents’ garage and basement started getting full.”

Clearly, it was time for the business to move.

“We got a storage unit but then quickly outgrew that,” recalls Fingler. “We went to four units, and then we were at a point where we couldn’t justify storage units anymore so we found a 1,100-square-foot warehouse in St. Albert for lease. I remember walking into it and thinking, ‘We’ll never fill that space!’”

But they did—and far beyond.

Today, Infinite Event Services is located in a 3,500-square-foot warehouse, with 15 shipping containers that are also full. “And now, we’re actually evaluating our growth because we’re again out of space,” Fingler adds.

Indeed, Fingler has built his business into a large but lean company specializing in event equipment rentals, particularly for weddings. Among other items, Infinite rents out a variety of things, from the usual to the unusual (more on that later). The business also provides single-source solutions for larger events, ranging from lighting to video to custom decor and electricity. And it has a small sales division, dealing with private members’ clubs and hotels who wish to buy A/V equipment.

Industry changes and customer service
Since starting up Infinite, Fingler says the party equipment rental industry has seen some major changes, particularly where weddings are concerned. “Years ago, customers would spend $3.50 per chair cover. But now there are so many lower-cost international linen companies out there that we’re seeing an influx of people buying chair covers for $1 from buy-and-sell websites, then washing and reselling them after their wedding,” says Fingler. Seat covers are just one example of industry changes, but a good one, he says. “A few years ago, we’d rent out thousands and thousands of chair covers every weekend. Now, it’s more like a couple hundred.”

Meanwhile, there are a lot of other smaller items — including centrepieces, candlelabras and wine glasses — that wedding customers would normally have rented; however, they are now choosing to buy, use and then resell them online.

While they cannot always compete on price, Infinite certainly does where customer service is concerned. “We answer our phone 24/7 and respond to emails very quickly, every day of the year, no matter what’s going on,” says Fingler. “Whether you’re an event planner or a bride, you want an answer immediately. Throwing them a quick email lets the customer immediately relax and move on to their next task. I get so many compliments saying, ‘That’s amazing how quickly you responded.’ When you show you care, they really appreciate it.”

Fingler recalls one night he received a late-night phone call from a frazzled customer. “I was laying at home watching TV at 11 p.m. and my phone rang and my customer said ‘Thank God you’ve answered!’ They’d forgotten to order linens for an event the very next morning and people were going to be arriving as early as 5 a.m.”

That was no problem for Fingler. “I left my house just after 11, drove to my warehouse, grabbed the linens the customer needed, drove about 1.5 hours from my home, set them up for the customer, went home and then went and picked them up the next day.”

That level of service is something Fingler prides himself on. “That particular experience created a customer who truly understands the value we bring. We like to come to the rescue and save the day.”

Sheldon Fingler survived the experience of telling his wife he was quitting his day job to start his own business. Fifteen years later

Being different
In addition to customer service, Fingler also ensures Infinite stands out for being different. “I find Infinite is successful by being what people want,” says Fingler. “For example, if a bride wants a piece of equipment for her wedding that she’s seen on TV, I will figure out what to do to help her. Basically, I want to be the guy who is known for always saying yes!” As a result, Infinite has built a reputation for meeting client needs, no matter the challenge. “I’ll do things no other company will, like the time a customer came to us with this wacky idea that they wanted an inflatable snow globe that you can stand in for picture-taking,” says Fingler. “They’d seen this kind of snow globe before but the cost wasn’t feasible for them. My immediate reaction was ‘We’ll do it for less than you’ve been quoted.’ And now we own a 12-foot snow globe.”

One bride wanted a soft ice cream machine. “Nobody was renting them though,” says Fingler. So he went out and bought one, which turned into a fantastic business opportunity. “I said yes to the bride, hoping that if the machine was used at one wedding, another customer would see it and rent it. And guess what? We have about six of those machines now,” he says. “It all started with someone wanting something different and listening to them. When nobody else would bring that item in, we said yes and it’s become a fantastic piece of equipment because it’s different. Meanwhile, you can’t just go on a buy-and-sell page to get a soft ice cream machine!”

Careful selection
Despite being a “yes man” and following some trends, Fingler is still careful about what he chooses to purchase and rent out. “Being different is important to us at Infinite, so doing what everyone else is doing isn’t really our thing,” he says. As an example, the Infinite team saw giant “LOVE” letters at a trade show. “We saw those giant letters and said ‘We have to be the only ones to have these!’” Despite being the first local business to own and rent out the letters, the item has since become incredibly popular at events. People are even starting to create their own. “Now I’m seeing people making letters just like ours in their own backyard and renting them out to people much cheaper that we would,” says Fingler.

The lesson learned? According to Fingler, “Even though it’s important to be first in terms of offering things, you need to realize that ‘first’ only lasts for so long.”

The upside of change
Despite the challenges that buy-and-sell websites and do-it-yourselfers have created for the industry, Fingler appreciates the power of social media channels in influencing customers.  “Social media has had a huge impact on our business,” says Fingler. “Years ago, if someone complained or said something good about a company, it was just within their narrow network. Now, when people have something to say, they shout it from the mountaintop with Wedding Wire reviews or Google reviews or on Facebook.”

He is proud to say that Infinite regularly gets five stars online. “The biggest thing that makes me smile is when people post ‘Fingler did this for me.’”