A sixth-generation family business enjoys its move into the rental industry. 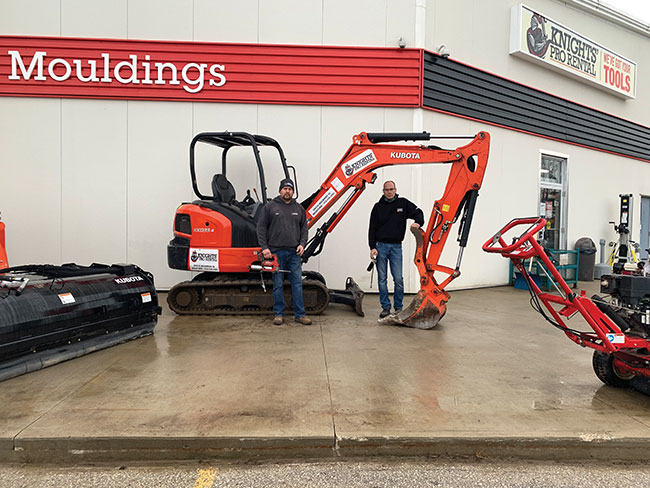 An interesting part of the business for the team is seeing what equipment works and what doesn’t.

When someone settles into an area and starts up a family business that lasts for multiple generations, it’s assumed there has been some change to the business over the years to ensure its success.

For the Knight family in Meaford, Ont., that change has been dramatic. And, quite frankly, it would have to be. The Knight family originally settled into the area back in 1846, shortly afterwards starting up a sawmill in Meaford on the Big Head River. Almost 70 years later in 1912, the family started up another business, selling its own hardwood flooring under the company, Knights’ of Meaford Flooring. Twenty-four years after starting up their flooring company, the Knight family opened up its own hardware store in 1936. It ran under the family brand until 2007, when the Knight family changed its model once again, converting their family-owned store into a Home Hardware franchise store renamed Knights’ Home Building Centre.

Nearly a decade after rebranding under the Home Hardware brand, the Knight family began its latest entrepreneurial adventure: entering the equipment rental market servicing contractors and homeowners. Under the brand, Knights’ Pro Rental, the company is led by Tyler Knight, general manager of the company and sixth generation of the Knight family to carry on its entrepreneurial traditions.

“We have a home building centre as our main business and we always wanted to get into the rental business. But whenever we get into something, we want to do it properly,” Tyler says. “It took us about 12 years to finally make the jump to do it.”

The 12 years of planning included making sure Tyler knew the different types of equipment he would want to stock, while ensuring the company had the financial means to properly invest in that equipment as well as have a place to grow.

A tough decision
Knights’ Pro Rental started up in late 2016 and was in full operation by the following spring in 2017. That following August, a devastating fire occurred at the family’s flooring plant and Tyler had to make the very difficult decision to end Knights’ of Meaford Flooring’s 105-year-long reign.

“We never opened it up again after that,” Tyler says. “The fire was a blessing in disguise in some ways. It gave us a chance to take a hard look at the business. It took a lot of time and staff and capital to keep it moving.”

After making the decision to close the flooring plant for good, Tyler was able to divert more resources into the new rental store, which had a slowly growing customer base from the get-go.

“At the start, it was kind of a mish-mash of everyone – homeowners and contractors. We had to win them over to get the work,” Tyler recalls. “It was all customer service that really did it at the end of the day. That, and having good, reliable equipment.”

Growing pains
Starting up the equipment rental business wasn’t easy for Tyler, who found it had a steep learning curve.

“Getting it up and running was definitely a challenge, since none of us had been in the rental business before,” he says, adding that rental manager Troy Allan has been one of the reasons for its success and growth to date.  “Troy knows small engines and equipment like that. We didn’t know any of the other aspects of it – how the customers were going to react when they had a problem, or when customers returned a damaged piece of equipment. It was basically brand new for everybody.”

Tyler says that the biggest hurdle the company is currently facing is finding the right staff to continue to grow the business.

“I think it takes a special kind of person to be able to do it. We’re fairly lucky with who we’ve got. It’s still small, but we’re growing like crazy,” he says, adding that the company’s success to date has stemmed from offering strong customer service.

“I couldn’t have expected us to grow so quickly. It’s been a fun ride so far,” adds Troy. “It’s interesting. I’m sure it would have been much easier if any of us came from a rental background, but we quickly adapted.”

All about the gear
For Tyler, finding the next great piece of equipment to add to this inventory is his favourite part of the job. Troy agrees “My favourite thing is when you get a new piece of equipment, it’s almost like an addiction. There’s always something new to learn about,” Troy says. “I would definitely say the bigger stuff seems to interest me more: excavators and skid steers. It seems like every time you get a bigger one, you’re more excited about it.”

Tyler says that the company has been adding new equipment every year since it opened.

“That’s been an interesting part of our success – seeing what equipment works and what doesn’t. And getting rid of equipment that doesn’t work,” he says. “We had a customer that had a need for a track carrier and said he would rent that off of us and use it quite a bit over the summer, but then he didn’t rent it as often as he had indicated. It became a dog in our inventory, but it worked out well, because we needed another skid steer and traded the track carrier for a new skid steer and got a little more value for it. It’s those types of things – turning equipment, adjusting your inventory with what’s working and what’s not working – that’s interesting.” 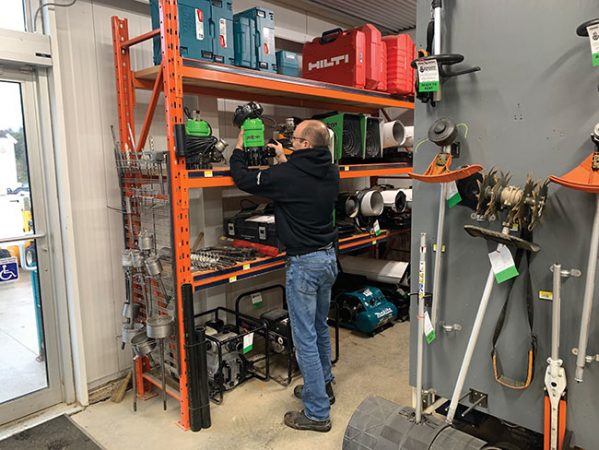 For the members of the Knights’ Pro Rental team, finding the next great piece of equipment to add to its inventory is the favourite part of their job. 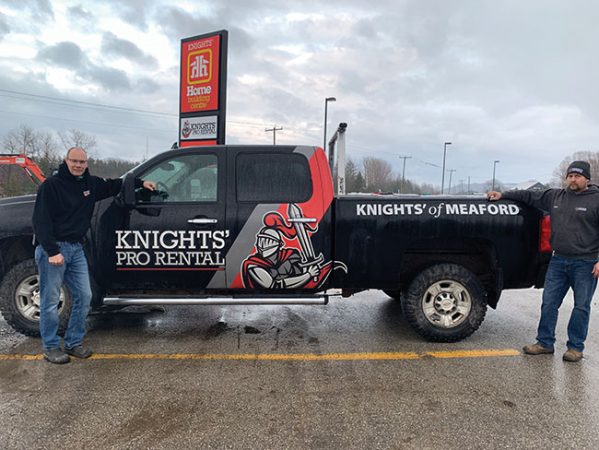 Knights’ Pro Rental is led by Tyler Knight, general manager of the company and sixth generation of the Knight family to carry on its entrepreneurial traditions.

Navigating COVID-19
The pandemic hit everyone off-guard, Knights’ Pro Rental included. One of the biggest challenges they’ve been dealing with to date is obtaining parts for repairs and maintenance of equipment.

“Getting repair parts has been an issue and getting parts for repairing customers’ equipment,” Tyler says. “We’re seeing it on the [home building centre] side as well.”

He adds that navigating the pandemic has become more difficult now than it was when the pandemic was officially declared back in March.

“When it first happened, I went into a mode where it was all, ‘Let’s get this done, we have to do it, we have to get used to it.’ But as people are getting tired of it, it seems more difficult now to keep up with it,” he says. “Our staff pulled together to make sure everything was working when it happened. It was crazy days, but the morale kept up… but now, it’s getting harder.”

Although aspects of running the business have become harder, some practices the company adapted throughout the pandemic may stay long after it is under control. One of those practices is curbside pickup.

“Most customers are good with it,” Troy says. “Some would rather it be back to the way it was, but personally I don’t mind it. There’s not that many times a customer actually needs to come into the store.”

“We’re training customers to call in advance, so we can have the contracts ready for when they come in,” Tyler adds. “When they do the curbside pickup, it’s a very quick transaction. It really helps us. When we come out of this pandemic, we’ll have the customers trained and they’ll probably be used to calling and still do it.”

Another post-pandemic practice that could stick around is being more selective with repairing customers’ tools.

“We always have a hard time saying no, but if it’s something that’s not worth repairing, we’ve started to weed a little more of that out of the shop, especially since it’s been so hard to get parts. Everyone is being choosier in saying, ‘No, we can’t repair that,’ or taking a good piece of equipment and fixing it and getting it back out quicker to the customer.”

Future plans
Tyler says that he still has plans to grow the company in the future, but until the pandemic is under control, he’ll likely remain at his current size.

“We want to keep growing, but as far as any future plans, we want to wait until COVID is over and stay strong through it,” he says. “We planned for the worst when COVID hit and really contracted things – brought it down to a bare bones level to save cash. Now, we’re able to pick up good used pieces of equipment because we’ve been able to conserve some cash throughout the year.”

A sound business decision from the sixth-generation business owner. It won’t be surprising if the Knight family continues its entrepreneurial adventures for many generations to come.