It’s easy to take for granted equipment that runs smoothly and is comfortable to operate. However, a great deal of research and testing goes into optimizing the vibration of an engine. 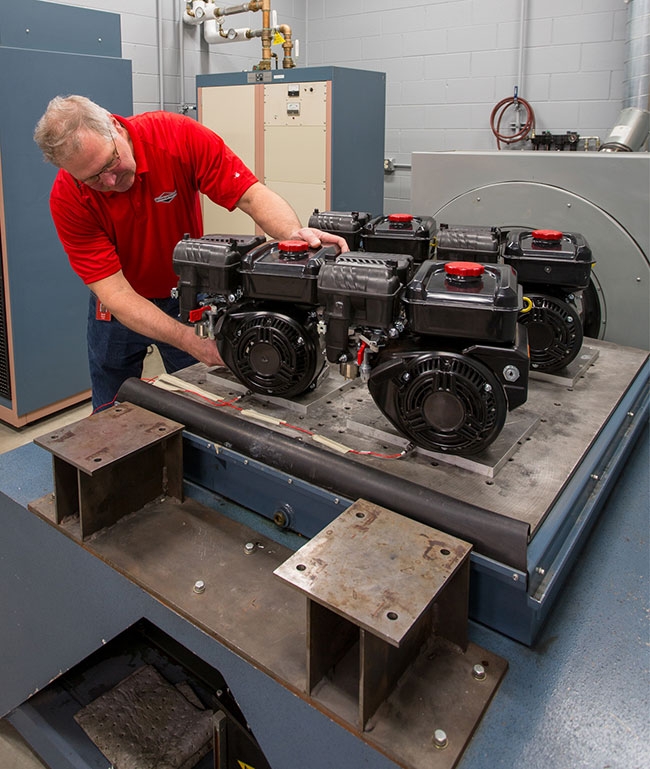 Large shaker tables at Briggs & Stratton’s NVH lab allow engineers to test multiple engines at one time It’s easy to take for granted equipment that runs smoothly and is comfortable to operate.

Advancements in the technology, tools and testing methods used in noise, vibration and harshness labs are allowing engine manufacturers to better evaluate how engines, equipment and components can be designed to reduce vibration and the effect vibration has on product performance and operator comfort. One industry that stands to benefit significantly, is concrete.

Zeroing in
From soil compaction to cutting and finishing, machines used by concrete contractors present an abundant number of diverse challenges directly associated with vibration. Thankfully, OEMs and engine manufacturers are becoming more and more adept at finding solutions.

While some engine manufacturers offer NVH testing as a means of working with OEMs to ready products for launch, some incorporate automotive grade technology to accelerate testing and improve their understanding of how an engine will interact with the equipment it powers.

These more advanced facilities allow manufacturers to hone in on aspects critical to a specific machine and application. For equipment used by concrete professionals, this may mean reducing overall vibration for a green concrete saw, testing component durability, or modifying an engine’s vibrational axis to improve the performance of a tamper or compactor.

Signature Solutions
The effects of vibration add up quickly for equipment used day after day on a jobsite. Knowing which components are most susceptible to vibration and how they can be improved can significantly reduce the failure rate.

In labs using advanced technology, similar to what is used in the automotive industry but adapted for construction equipment, NVH engineers can capture the vibration signature for a machine, its engine and any attached components impacted by vibration. To collect the required data, engineers run the equipment in its normal environment with accelerometers attached to potential problem points to measure vibration. Accelerometers record specific frequencies of motion that can later be reproduced as sound waves for a shaker test. The shaker — essentially a massive subwoofer, which vibrates a steel plate that has engines and components bolted to it — replicates and accelerates real-world effects of vibration in a controlled environment.

To speed vibration’s effects, engineers run the vibration recording through software to isolate the fatigue damage spectrum — the waveforms most damaging for a given material, whether it’s aluminum, plastic or steel. By isolating this portion of the recorded data, engineers can greatly reduce test times by increasing the occurrence of wavelengths within the fatigue damage spectrum during testing.

This helps engineers focus on specific components, simultaneously test multiple variations of a particular part, and quickly provide feedback to designers. It also helps OEMs get new products to market faster. Using this method, engineers can complete new product testing that would otherwise take six months or longer in only a month or two.

Additionally, some engine manufacturers work closely with OEMs to test the engine while mounted to the equipment to pinpoint potential design flaws that can be corrected before production. This results in engines and equipment that are more durable, less susceptible to vibration and are available to consumers faster.

Concerning concrete
Beyond equipment failure, concrete applications present a number of specific challenges that NVH testing can address throughout the design process. For concrete finishing applications, low vibration is critical for operator fatigue, as well as the integrity of the end result.

Many applications work with green concrete, where vibration can pose a risk to the structural integrity or quality of the cut. Green concrete saws, for example, require engine models with lower vibration because excess vibration can be harmful when cutting reliefs while concrete is curing. Even the slightest vibration can produce jagged cuts or result in cracks and chips as the concrete hardens.

Trowels also benefit from low vibration, as a smooth ride helps to produce a smooth finish. For trowels, ride-on units in particular, low vibration is also important when considering operator fatigue. For larger pours, a worker may operate a ride-on trowel continuously for as long as 8-10 hours. To minimize the effects of fatigue, engineers can reduce vibration at operator touch points. By placing accelerometers on the seat, handles and foot platform, engineers can determine what changes, if any, are required to reduce fatigue.

Countering Vibration
Equipment used for soil compaction and ground preparation can pose more unique challenges. Since many of these machines create significant vibration on their own, such as tampers and rammers, engineers are less concerned with overall vibration of the engine. Instead their attention turns to the durability of the engine as well as the possible interference that an engine’s balance and directional motion may have on the machine’s performance.

To determine the durability of the engine and its components, advanced NVH labs complete extensive shaker testing to ensure everything will withstand the machine’s movement. To take testing a step further, NVH engineers conduct shock tests, which are also used to simulate the effect of an engine or equipment being dropped. The shock test abruptly displaces the shaker’s surface by 1 inch in just milliseconds before returning to its initial position. This can create up to 50 g/s of force. Doing so repeatedly is excellent for determining components’ strength in actual use.

Additionally, engineers must ensure that the specific balance of the engine’s vibration will not cause the machine to “walk” or become difficult to control. To accomplish this, engineers may reduce the vibrational axis that parallels the directional motion of the machine while increasing the crankshaft’s axis. From here, engineers can specify an ideal balance ratio for the given application. For tampers, if one axis of vibration is slightly out of line, it may affect equipment operation as well as lead to premature failure of engine components.

In some cases, the NVH specialists will also work with designers to produce custom components for such applications. In one instance, an OEM experiencing problems with an engine’s mounting feet turned to Briggs & Stratton for assistance. Using strain gauges to measure stress, engineers determined that the flatness of the tamper base was not within specifications, causing the tamper to transfer load to the engine’s mount feet. Using the test data, product engineers were able to appropriately modify the base’s design, improving the productivity and user comfort of the machine.

Added Value
Engine manufacturers have long made an effort to prevent vibration from negatively impacting equipment performance and operator fatigue. As greater investments are made to improve the technology and testing capabilities of NVH facilities, manufacturers have the opportunity to deepen their understanding of what improvements can still be made.

To further improve the products and end users’ experiences, manufacturers such as Briggs & Stratton Commercial Power expand on this commitment by working closely with OEMs throughout this rigorous process. The result is better performing, more user-friendly equipment that gives operators the tools to improve the integrity and maximize the productivity of every job.