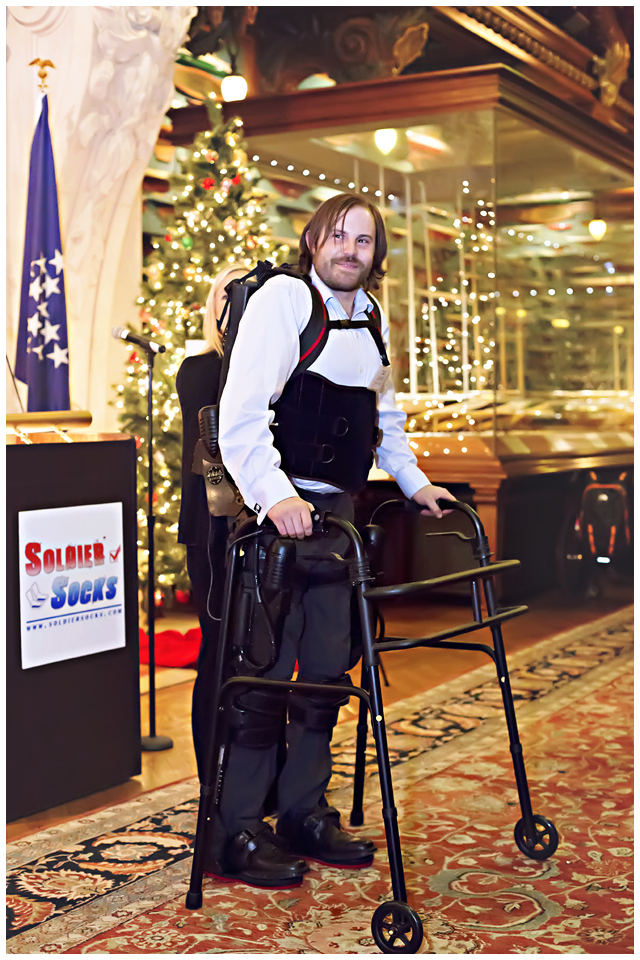 June 17, 2014 - United Rentals has expanded its longstanding support of military veterans by affiliating with the non-profit organization SoldierSocks. The company's initial donation of $50,000 helped fund an Ekso bionic exoskeleton SoldierSuit for veteran Dan Rose, a retired Army sergeant who was severely paralyzed by a bomb in Afghanistan.

Michael Kneeland, chief executive officer of United Rentals, said, "It is a privilege to know that we can help deliver a life-changing technology to veterans who have paid such a high price for their military service. Through SoldierSocks and the bionic SoldierSuit, paralyzed veterans can literally take the next steps in reclaiming their mobility. This partnership resonates with our employees on every level, particularly in our commitment to innovation and our steadfast support of military veterans."
U
nited Rentals engages in numerous activities to assist veterans in civilian life, including the funding of service dogs through Educated Canines Assisting with Disabilities (ECAD). The company has been named a Top 100 Military-Friendly Employer® for five consecutive years by GI Jobs magazine, a Most Valuable Employer (MVE) for Military for four consecutive years by CivilianJobs.com, and a 2014 Most Valuable Employer for Military by MilitaryTimes.com.

United Rentals first supported SoldierSocks in November of 2013 with a commodities donation drive, contributing over 2,500 lbs. of supplies for U.S. troops. As SoldierSocks co-founder and chairman Chris Meek noted, "It was a little daunting when packages started showing up from over 700 branches! The drive was a tremendous Veterans Day gesture from United Rentals employees, and now the company's corporate support has been a key to our funding of Ekso mobility robotics for veterans."

SoldierSocks was founded in 2009 with the mission of providing donated socks and other basic necessities to troops deployed in Afghanistan and Iraq. To date, the non-profit organization has shipped over 50,000 lbs. of items to U.S. military forces. In 2013, SoliderSocks expanded its fundraising scope by partnering with Ekso Bionics to help paralyzed veterans walk again with the aid of Ekso SoldierSuit technology.