Features Party and event Trends and technology
Space and Time

Its presence is heralded, at the corner of 7th and Fremont in downtown Las Vegas, by a large praying mantis statue and a sign letting you know that you’ve arrived at Container Park. 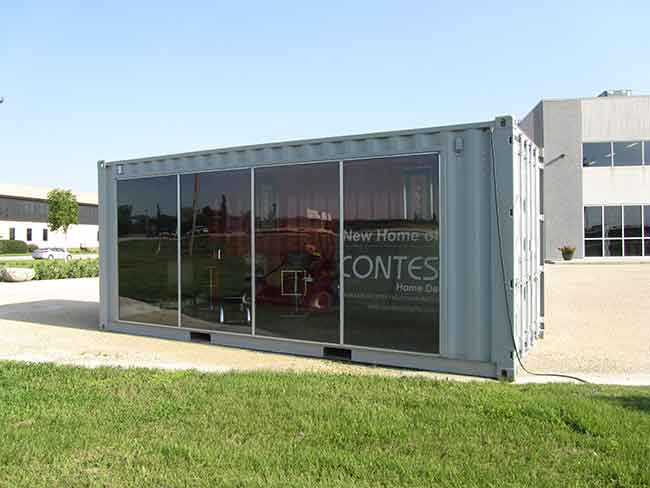 How about a portable showroom? Shelter designers are doing some truly amazing things with shipping containers these days. This innovative design comes from ADM Storage in Winnipeg.

It’s a retail and entertainment space opened in 2013 that takes up half of a city block in downtown Vegas. It’s a cornerstone of the redevelopment of the downtown area. The twist is that the name is literal; Container Park’s buildings are made entirely from shipping containers.

The use of the portable and/or temporary office or storage space—options which come in various shapes and sizes and textures (and not just shipping containers)–has become a potential new rival to traditional office space. Aside from containers, you have choices such as your traditional orange-doored field office, but you can also choose buildings made of fabric or even wood; a company called Quick Garden in the UK offers a their take on log cabins and even a model called a “garden office.”

Remember there was a time in this virtual age when it was thought that bricks-and-mortar buildings were obsolete? While the current economic downturn hasn’t been good for traditional commercial and industrial space in some of Canada’s bigger cities, the options for commercial building alternatives are getting pretty interesting. And some of these options happen to be cheaper, more portable and more flexible than your average traditional building.

In terms of what’s available in the marketplace today, a rental company can go online and purchase a passable shipping container, for instance, one which may need a coat of paint (or three) as well as nicer, newer-generation units that can double as an office or a lunchroom. A cursory look at Kijiji will turn up any number of rusty, repurposed models. The cheaper, beat-up ones still generally go for several thousand dollars, OBO, but they are still less expensive than a traditional building.

While the media is still in novelty mode (“Guess what they’re making out of shipping containers now!”), it’s not just Container Park that’s making a mark. There’s the modular Keetwonen student housing complex in Amsterdam which started back in 2005, there are condo developments in cities like Winnipeg and Vancouver, there’s Container City in London, England, and there’s still the occasional surprise like the pop-up Taco Bell restaurant at the South by Southwest festival in Austin made out of containers.

Mario Constantini is a believer. The Winnipeg man is the owner and operator of ADM Storage.

“I was in the concrete business and my two sons took over Mario’s Concrete,” said Constantini, who estimates that he has about half of Winnipeg’s market share in repurposed shipping containers. “So, I figured to keep out of their hair, I would set up a container storage business, buy 10 or 20 containers and rent them out.”

That was back in 2002. Business has boomed since then. He has moved a number of times to accommodate his growing business. He has dealt with diverse clients, from national defence to the movie industry to the owners of the mini-donut stand at Investors Group Field, the home of the Winnipeg Blue Bombers. Constantini rents some out (which generally go from about $90 to $390 a month, depending on the size and features), he sells some and he customizes others.

“We have been part of this movement to introduce these. When we first came here to the rural municipality of Macdonald (on the outskirts of Winnipeg), saying we want to set up shop, they were kind of skeptical. You look at some of these port cities, you see acres and acres of land with all these rusty containers. It doesn’t look pretty. They threw the book at us. After a while, we decided to put up some of these structures, and now they are open to whatever we can build.”

Thirteen years later, “it turns out we have a 16.5-acre site, about 600-plus containers,” he said. Constantini is still within Winnipeg city limits, but along McGillivray Boulevard in a rural-seeming area with plenty of space for his gear. Constantini says he sells all the time to other rental companies.

“It’s easy to set up,” he said. “You just line them up on the ground next to each other and rent them out. It’s basically a self-contained little building.”

Constantini’s immersion into containers can remind one of the old Remington razor executive Victor Kiam, who said “I liked the shaver so much, I bought the company.” But in Constantini’s case, his devotion extends to his home.

Indeed, both buildings, which occupy the same lot, are spacious and very, very solid. The stairwell in the two-story office building is made of shipping containers placed on end and the balusters along both the home and office staircases–as well as the fencing outside–are repurposed from the corrugated metal cut out for the buildings’ windows. Nothing goes to waste. There are also greenhouses, garages and machine rooms amongst other, smaller structures, all made from shipping containers, not even for show; they’re all in his own yard.

But it does take skill to put these things together, says Constantini.

“The main challenge is the climate; insulation is the main factor. If you don’t insulate well, you won’t be able to live in it. Steel is a great conductor of heat and cold. And if you get condensation in there, you get mold. But there are ways to do it,” he said. “You need to have a builder on board if you want to build anything, people who have some knowledge. It’s not as simple as having 2x4s and plywood.”

However, your choices, if you’re looking for a little extra office or storage space, are not just limited to steel containers. Terry Lempriere deals in air and fabric. He is the man behind Tegra Structures, a seven-year-old, Alberta-based firm that distributes BuildAir structures in Canada and the western US.

But Tegra’s structures aren’t just flimsy tents made of Air Dancer material. Nor are they buildings like the old BC Place, which relied on pressurized air inside the structure (and a gigantic basin of concrete) to keep the roof up. Lempriere says, “we are offering pneumatic structures, they are not air supported… With ours, the pressure is in the columns.”

Like with shipping containers, Tegra’s structures are customizable. They can be branded or altered in a number of ways and can be used for industries such as mining and construction, can be used as a sports facility, they can have military uses and, as Lempriere envisions, natural disaster relief applications. You can place rooms and cubicles inside and you can offer any number of modifications.

“We’re getting a lot of interest, predominantly from the end users; the energy companies, the construction companies… (In terms of rental) it has been kind of slow, which is why we joined the Canadian Rental Association and the American Rental Association because, quite frankly, honestly, we can’t wait for every rental company to get on board and start realizing that the end users want this. So we have to be in a position not to turn work away because times are what they are, price of oil… We’re not going to lose revenue waiting for rental companies to catch up.”

Unlike Tegra, Britco isn’t a newer kid on the block but, despite being part of a well-established and award-winning western Canadian company, Britco’s Christoph Neufeld doesn’t take his company’s market lightly.

Britco is the modular construction and rental firm that has been the supplier of Vancouver’s PNE Prize Home in past years, they are also responsible for initiatives like the Olympic Legacy Affordable Housing project and have won a variety of exporter, modular building and entrepreneurial awards. For Neufeld, the business of dealing in buildings is not for the weak of heart nor the uneducated (I’m paraphrasing).

“People are all working and living and sleeping in these buildings; they’re not just renting a shovel,” says Neufeld. “It would be no different than renting a big piece of machinery or equipment and getting trained on it first. Even though a building is static and doesn’t move, there’s a lot that goes into making sure that it can operate safely, that it can structurally hold what it’s supposed to in terms of people inside and equipment inside or the elements on top of it, snow or rain.”

“As soon as you’re getting into public safety, the building codes come into play, engineering comes into play, these are all things that need to be addressed in order for you to even do business doing that business. So, having the expertise to do that, you can’t just shoot from the hip and just wing it. You have to really know what you’re doing, or have the expertise to do it.”

The other challenge to renting out or providing any portable structure is found on the more local level. Bylaws and local zoning issues can throw up obstacles. Constantini, for instance, isn’t currently allowed to stack his containers more than two high, although he is appealing to be able to go a little higher, and says it all depends on where you are locating the structures.

“Well, different jurisdictions, you’ll have to work with the local authorities and see what they allow and what they don’t allow,” says Constantini.

“It is a long-term play,” says Neufeld. “No one does well in this business overnight.”