Flood-relief trailers can get you ready for the deluge. 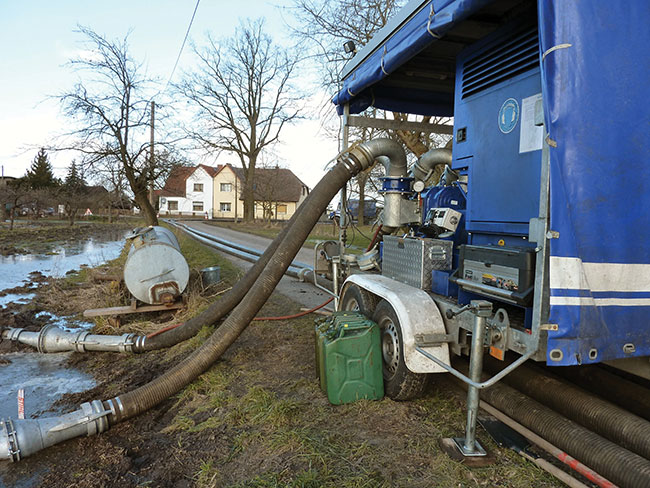 Pumps are the first thing that come to mind when you think of floods. But equipment for saving and repairing buildings may be an even higher priority. Photo: siwi1/Adobe stock

The second installment in our specialty trailers series looks at an especially timely niche given the terrible flooding that hit B.C. this winter. Here’s some advice on creating a ready-made trailer full of equipment to respond when your customers are in danger of being washed away.

We think of floods occurring when major rivers thaw in the spring, but floods – the most costly type of disaster in terms of property damage, according to Public Safety Canada – can occur anytime. This was demonstrated in late 2021, when torrential rains surprised southern British Columbia. Rivers burst their banks and landslides tore down mountains, causing several deaths, massive property destruction and widespread livestock loss.

It’s a good idea for rental companies to be ready to ship trailers out with ready-to-go equipment needed for floods, says Jim Mandeville, senior project manager at First Onsite Property Restoration, a disaster remediation company that serves Canada, the U.S. and Puerto Rico. “Having a trailer of equipment that can be transported quickly to a flood zone can pay off handsomely when disaster strikes,” he says. “With a flood, there are many types of equipment needed and as with any disaster, the faster that equipment can be brought on site, the better.”

The first thing that needs to be done in a flood after saving lives is to secure buildings, says Mandeville. “Our buildings aren’t designed to get wet, and if it’s a flood caused by an extreme weather event and not overland, roofs may need to be secured,” he says. “That means generators, light stands, aerial work platforms of various sizes and types. With any type of flood, the water has to be removed with pumps of varying sizes, fans and large dehumidifiers. To remove damaged materials and debris, we need smallish equipment such as skid steers and plenty of dumpsters. After debris removal and buildings are dried and disinfected, other types of equipment are needed for the re-construction phase.”

Considerations for preparing a flood relief trailer
On the question of how to mount flood-related equipment on trailers, Mandeville says large dehumidifiers are preferably skid-mounted because this makes it easy to move them around using a crane. Large diesel generators can be accessed pretty easily whether they’re mounted or not mounted.

In terms of concerns over types of trailers that are best transported to and through a flooded area, Mandeville says this really isn’t an issue because clearing roads has already been a top priority in order to save and safeguard lives. “We’ve had a few situations where we’ve used helicopters to move equipment up north and when there was extensive flooding, but it’s very rare,” he says.

The size of trailer obviously relates to what it will carry and the weight of that load. Flat deck, single-axle or multi-axle trailers can be considered and the tow vehicle for the trailer also needs to be properly sized.

Making it profitable
Mandeville acknowledges that floods and other disasters don’t come at regular intervals, but points out that the particular equipment (large fans and dehumidifiers) to deal with floods may be needed year-round more than rental company leaders might think. It’s up to each rental company to research their specific market in terms of the yearly demand for flood equipment and the “surge potential” for disasters as well.

And, it may make sense to store equipment on trailers, making it fast to ship out, says Mandeville, for those rental stores with bigger warehouses. This way you avoid the costs of loading trailers. “It takes six guys at least a half a day to load a trailer with flood equipment,” he says. “It’s all hand-stacked and awkward shapes and it may be worthwhile to buy more trailers rather than load trailers as fast as possible when disaster strikes.”

To keep trailers secure, consider adding GPS beacons to them, using wheel locks or removing tires after delivery if a trailer is going to be on a site for a long time. Take pictures at delivery so you can verify later the condition that the trailer was in on day one.

Mobile rental store
The idea of a mobile disaster-recovery equipment rental store on a trailer was realized in December 2021 in Kentucky after a tornado hit, spearheaded by Lowe’s and other rental industry companies. Tools and equipment available for rent on the Lowe’s tool rental disaster response trailer includes generators, dehumidifiers, breaker hammers, ladders, and more. The trailer is 53 feet long and can haul a maximum weight of 45,000 lbs.

The trailer’s software, a cloud-based platform called Essentials, is made by Point of Rental, which markets rental and inventory management software used in several countries. Brian Beaudry, content manager for Point of Rental, says if no power and no cell network or other internet source is available to operate the trailer, satellite internet and a generator could be used.

Using Essentials, Lowes “can not only rent out stock that’s assigned to the trailer,” Beaudry explains, “but transfer stock to and from other stores as needed. Essentials allows them to update the address and GPS coordinates for their trailer store and include it in their online storefront, allowing local customers to see the trailer as their closest store if, in fact, it is.”