Get ready for tornado season with a ready-made disaster response trailer. 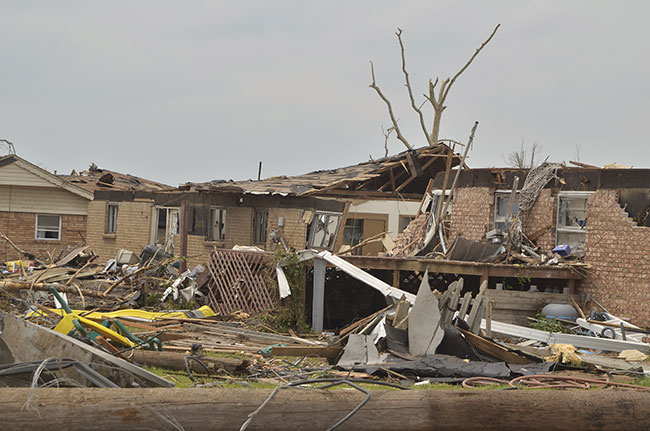 What will they need to clean this up? Understanding what is involved in specific kinds of disasters is the first step to assembling a specialty trailer designed to address it. Photo credit: © chris / Adobe Stock

Few things can cause the complete devastation of people’s homes and businesses quite like tornadoes. These destructive storms can wreak havoc on areas a mile wide and often leave little untouched in their path.

If a rental store’s market area is in one of the many areas of the country susceptible to tornados, it might want to consider being ready with a trailer ready-made to quickly transport needed items to disaster relief zones (or at least have those items on hand for quick assembly). We asked disaster response expert, Jim Mandeville of First Onsite Property Restoration, what clients like him need in a trailer to address tornado damage.

“When you think about tornado damage and our response to tornado events, basically you’ve got a central path where that tornado was on the ground. Directly in that central path that is potentially a couple-hundred-feet-wide or potentially a mile wide, most of the buildings are going to be unrepairable,” explains Mandeville. “What we really need to end up dealing with quickly is all the homes and businesses that are on either side of that path, because on either side of the total destruction we have partial destruction.”

All those partially damaged homes and businesses with roofing damage from high winds, broken windows and doors from flying debris, and potentially water damage due to the roofing and window damage, need to be repaired as quickly as possible to prevent further damage.

“When we look at order of operations here, step one is always to get the buildings that are restorable to a point where they’re not going to be damaged any further. What that means is we’re looking at things like tarping roofs, boarding up windows and doors, and dealing with the water damage,” Mandeville says.

The types of items necessary to perform this kind of work include tarps, plywood, power tools and generators, as well as larger equipment for larger industrial and commercial spaces to be able to access roofs like aerial work platforms, and machinery to move debris, like skid steers.

For a trailer for this kind of application, Mandeville says it will need to be well-stocked with consumable items such as plywood, structural lumber, nails and screws.

“We’re going to want to have some drying equipment on that trailer, things we can use for water damage mitigation: air movers, dehumidifiers,” he adds.

Since time is of the essence in these types of situations, restoration companies and disaster response teams can’t have their work hindered by a lack of daylight.

“We’re going to want to have some sort of lighting, whether that’s mounted to a trailer or truck. Portable lighting, stands – there’s lots of new LED stuff out there that we can run off of generators,” Mandeville says. “Obviously along with that, all of my trailers that I own, we have them permanently wired so they have lights in them, a bunch of plugs in the back of the trailer to charge power tool batteries and have them set up so we can just plug that trailer directly into a generator so we can use it as a hub.” 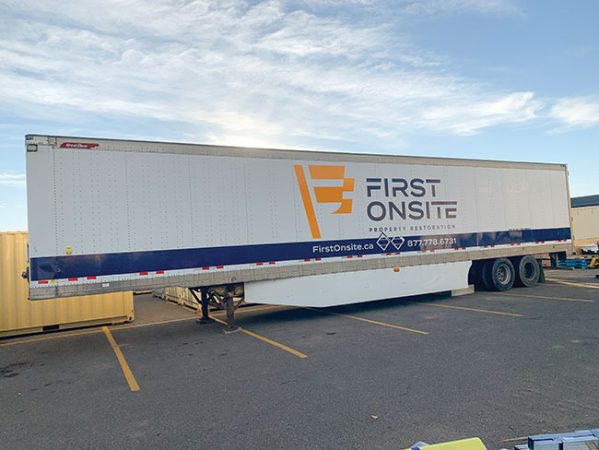 Disaster mitigation companies like First Onsite create mobile command centres with everything needed to stay at the scene for long periods.

He adds that he’s also seen trailers built with integrated generators but there are maintenance costs and upfront costs to consider when looking at adding that as a feature.

Another trailer option that is used a lot for disaster relief efforts are mobile command centres.

“FEMA [the U.S. disaster response agency] and the various provincial emergency management organizations have them. They’re usually transport trailers that will convert out with slide-outs on them with office space ready to go, water capacity for a restroom, a built-in generator, built-in communications capacity and a satellite base because the cell phone network is problematic. So, there are those, but they are incredibly expensive rigs,” Mandeville says.

On the other hand, a smaller company may only be doing one or two jobs at a time and may have an 18-foot trailer pulled behind a pickup with a generator, lights and a place to plug in batteries.

“It’s totally scalable,” Mandeville says, adding that smaller companies need to ensure they’re properly prepared with the appropriate trailer. “Obviously it’s nice to buy a single-axle because it’s more economical to tow, but it’s certainly not going to do the job if you’ve got 7,000 pounds you’re trying to put in that thing.” 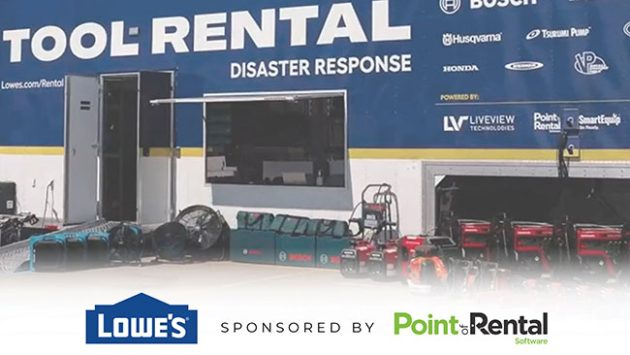 Lowe’s created this disaster response trailer to assist with cleanup in Kentucky after tornados hit the state in December.

He adds that the tow vehicle for the trailer also needs to be properly sized.

“If you’re going to have a 30-foot tandem axle trailer full of tools that weighs 12,000 pounds, you probably shouldn’t be trying to pull it with an F-150. And, of course, there’s all kinds of legal ramifications and license ramifications that come along with that as well,” Mandeville says. “As far as sizing trucks and trailers go, all pickup truck manufacturers provide towing capacity data. Trailer manufactures will also provide recommended class of tow vehicle. But where you have to be careful with the trailers, is that it’s based on an empty trailer, not what you’re going to put into it. So really, the key message is do your research.”

An example of a tornado reponse trailer deployed by the rental industry is available. In December, Lowe;s deployed a Tool Rental Disaster Response trailer to help with efforts to clean up after devastating storms in that area. It carried generators, saws, dehumidifiers, breaker hammers, ladders, and more. Point of Rental provided the software for the Disaster Response Trailer; other partners included Bosch, Husqvarna, Tsurumi, FNA-Simpson, GNE-Honda, Xpower, Metabo, Werner, VP Racing Fuels, SmartEquip, AT&T, and LiveView.

“I’ve always been proud of how the rental industry in particular is always first in line to help their communities in times of crisis,” said Point of Rental CEO, Wayne Harris. “We’re glad to be a part of this initiative from Lowe’s and to see the Disaster Response Trailer provide some value to the people affected by this tragedy.”

So it looks like providing disaster response trailers is not just a way to provide a great solution to customers, but also something we can feel good about, too.

Related
Rental leaders unite to provide relief in Kentucky
Watching the trailers – How to get the most out of your heavy-haul trailers
Counter Talks Episode #18: Building Back Better – Jim Mandeville, FirstOnSite
CRA President’s Message: Disaster mitigated