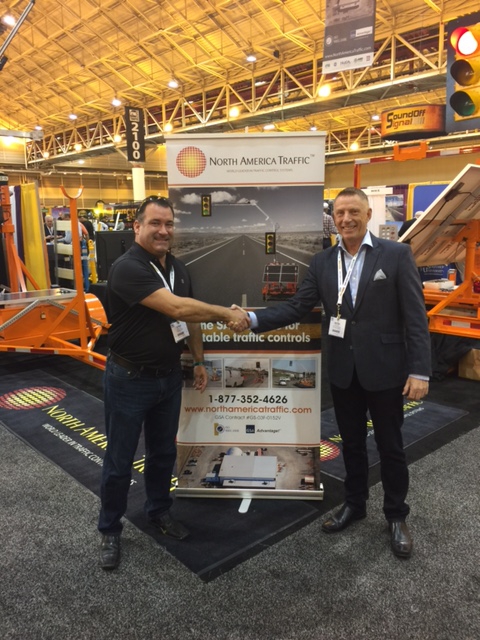 “Adding M&M Services to our growing network of dealers means that Kentucky customers will benefit from local service and support,” says Peter Vieveen, President of North America Traffic. “Customers will also have the advantage of the expertise and contacts that M&M has developed over more than 35 years in the construction business.”

The agreement between the two companies was signed only a month after Bill Branderhorst, Manager – US Dealer Development, happened to walk into M&M Services just as Star Smith, Vice President and COO, was talking about traffic control with his co-workers.

“Timing is everything,” says Branderhorst. “M&M told me that they had been looking for an alternative for portable temporary traffic signals and automatic flaggers.”

Branderhorst asked Smith if he would like to demo a set of the North America Traffic portable traffic lights. The next week, Smith placed two portable temporary traffic signals at one of their projects in Western Kentucky.

“We were pleased with the ease of setup and very impressed with just how simple it was to program the units on the site. When the opportunity to become a distributor was presented, we couldn’t resist,” says Smith.

When Branderhorst walked into the office, he immediately saw M&M’s potential as a dealer. “I was impressed with M&M’s standards of service,” said Branderhorst of the initial meeting. “They showed great enthusiasm for our product line and their knowledge of similar products in the marketplace meant that I didn’t have to convince them of the benefits of North America Traffic products. They convinced themselves.”

Simple programming means quick set-up
Jeff McMahon, President & CEO of M&M Services, says they chose to become a North America Traffic dealer because the products are well made, easy to use, and fit well with M&M’s existing product line-up in both sales and rental. “Adding the North America Traffic product line will allow us to offer a superior portable traffic signal at a competitive price and that will add value and complement our entire product line,” he says.

Mahon says the most attractive feature of the NAT portable traffic signals is how easy they are to program. “Even without training, workers would have no trouble programming the equipment at the job site, making set-up faster and more efficient.”

M&M Services will showcase North America Traffic portable traffic control equipment at the World of Asphalt Expo in Nashville, Tennessee from March 22 to 24. According to McMahon, they have also hired a sales representative to start promoting the product line in Central Kentucky, and expect to expand North America Traffic’s presence in the state.