June 30, 2015 - Stuart Nicholl, Doosan Portable Power's director of operations and marketing for Canada, will retire in July after 39 years with the company.  “Making the decision to retire was very difficult," said Nicholl.  "I think between my family and our financial planner, I was the last to accept that I was really going to retire from Doosan. I might still arrive at work on autopilot for a few weeks.” 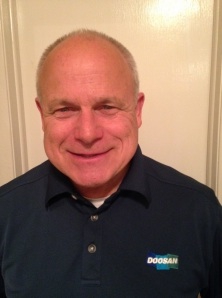 Nicholl was born in Montreal, but says “I was having trouble learning French, so I moved to Toronto when I was two.”  After graduation from high school, he enrolled in Concordia University in downtown Montreal where he earned his Bachelor of Civil Engineering degree. He enjoyed his time at the university and participated in many activities while there. Nicholl served as treasurer for the Engineers Association and was a member of the Day Students Association. While at the university he played varsity football for three years. He also participated in the first Concrete Canoe Race with a nimble 225 pound canoe. In this race, the canoe is actually made of concrete and is typically created for an engineering-type competition.

After graduation from college, Nicholl immediately joined Canadian Ingersoll-Rand (CIR) in the Mining and Construction division as an application engineer. In this role, he sized pumps for sales engineers, provided quotations and handled warranty claims for the James Bay Hydro Project with Wajax.  This job provided a stepping stone to become a sales engineer. A career as a sales engineer for a dynamic major global company was appealing and Nicholl says he was excited about the opportunity for career growth and travel to other locations.

Throughout Nicholl’s career he held roles of increasing responsibility in Montreal, Halifax, Saskatoon, Edmonton, Calgary and Mississauga. He served as sales engineer for the Maritimes, a sales engineer for M&C Pump Group and rotary drill for Western Canada and IRES sales manager, then product and sales support manager for Canada and director of operations and marketing for Canada. Nicholl was also on the board of directors for Bobcat Equipment in Canada and a signing officer.

When asked what role he enjoyed the most, Nicholl replies, “My current role, as we have a small, focused and dedicated team all trying to do our best and we have experienced great success together.” Some of the most memorable experiences of his career include opening the first IRES in Canada in 1983. Another highlight was being the sales manager on the team that sold the first seven DMH 12 1/4-inch blast hole drills for $7 million in British Columbia. The Circle of Excellence Award trips to New York and Vegas made his list of memorable experiences. Opening the first Doosan facility in Canada on Jan. 1, 2009, ranked at the top on his list as did achieving record Canadian revenue in 2012. The transition to Doosan gave Nicholl the opportunity to step up as a leader with more independent operational and marketing responsibility for the Canadian business enabling the team to be more agile in the marketplace.

When he is not at work, Nicholl’s priority is to be with his family, but he does enjoy coaching girl’s hockey and playing hockey. He also helps with projects at his church. Nicholl has been married for 31 years to his “loving and forgiving wife, Betty, who will no longer have to tolerate his late-night working habits.”

“We’ve have been blessed with five of the best children possible who range in age from 18 to 28,” Nicholl reports. Jessie and Mark have finished university and college respectively and have started their careers, their twins, Adam and Daniel, are in their last year of university and Mary is just beginning university. Betty and Stu are also now grandparents to one very magical grandson, William.

When Nicholl is asked what kept him with Doosan so long, he said, “I had the benefit of experiencing a variety of never-ending challenging opportunities and working with great people who trusted me to do the best that I could for the Canadian business and being rewarded fairly for my efforts.”

What does the future hold for Nicholl? “I want to renew and re-energize my body, mind and spirit so that I can re-invent myself with a focus on helping my family, friends and others. That all sounds good, but there might also be a couple Coors Lights and a hammock in there to help make it all go smoothly. I will now have time to visit more with my 89-year-old parents in Nova Scotia and help repair their cottage.”

Nicholl says he thanks all of the Statesville employees for their contribution in helping with their Canadian success and he especially wanted to thank all the staff of Team Canada. In particular, he thanked Lance Mathern for his support and his insightful understanding of the uniqueness of the Canadian business.

“Stu, thank you for your service to Doosan Portable Power and your support of your Canadian team members,” a statement in the Doosan newsletter reads. “They will miss your humor and your attention to the needs of the employees on your team. Good luck as you transition into this new chapter of your life.”