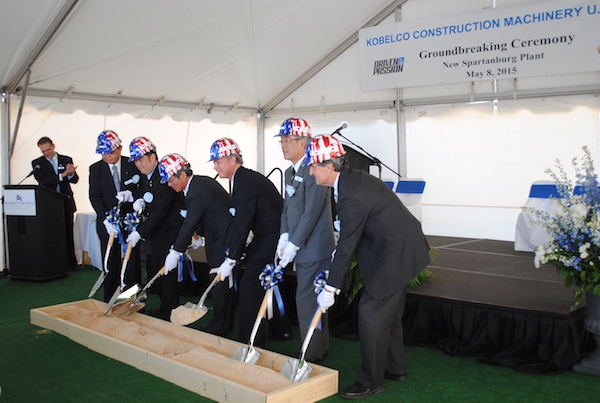 The occasion kicked off with a procession of distinguished guest speakers who applauded KOBELCO’s decision to bring its manufacturing to the US and to the Palmetto State. A traditional Japanese gift exchange was made between KOBELCO officials and representatives from both South Carolina and Spartanburg County, symbolizing each party’s appreciation and acknowledgement for supporting one another. The ceremonial groundbreaking brought the event to a close; KOBELCO officials and special guests of the community wore KOBELCO-branded, American flag designed hard hats while digging the first shovel of dirt for the new facility together.

“It’s been a true privilege to work with the people of KOBELCO,” noted Mr. Anthony Allen, Senior Project Manager of the South Carolina Department of Commerce. “Deciding where to locate a new manufacturing facility is a monumental task. The KOBELCO team was thoroughly professional and was a pleasure to work with throughout the entire process. Japanese companies are world-renowned for the highest quality and precision products. We now have one more Japanese-based company in South Carolina – we’re very proud and very happy about that.”

KOBELCO chose the Spartanburg location from nearly 50 candidate sites across eight states for the property’s vast amount of land and nearby access to major domestic ports. Sitting on approximately 85 acres, KOBELCO’s $41 million investment involves the development of a 156,000 square foot production plant, 17,000 square foot office building and areas for both machinery parking and testing. The property also provides KOBELCO with plenty of space for future production capacity expansion. With site preparation for the facility underway, construction is expected to be complete in December 2015 and mass production of 1,800 units/year will begin in January 2016.

“Our US facility will follow the same concept as our Itsukaichi facility in Japan – which is the most modern, energetic, and high quality excavator factory in the world,” said Pete Morita, President and CEO of KOBELCO Construction Machinery USA. “The US facility will not only reduce the production lead-time of machinery and improve our capabilities for meeting market needs, but it will also allow for the transformation of KOBELCO USA into a company with integrated production and sales – all on US soil. This is our commitment to the market. This is further proof that KOBELCO is a reliable company and we will continue to provide quality products to our customers through our new plant by following the philosophy of ‘Made in America’”

The development of KOBELCO’s US based manufacturing facility allows the company to proudly support the Association of Equipment Manufacturers (AEM). KOBELCO will be participating in the AEM I Make America campaign by creating over 130 new jobs for the skilled workforce living in the communities that surround the Spartanburg area. “KOBELCO’s new facility in South Carolina demonstrates what our I Make America campaign is all about: growing the equipment manufacturing industry and supporting good-paying jobs across the United States,” said Dennis Slater, President of AEM upon the occasion of the groundbreaking event. “This new plant represents growth for KOBELCO and their commitment to the economy of Spartanburg. KOBELCO helps ‘make America’ every day.”

By taking full advantage of its production facility in Spartanburg, KOBELCO will further enhance its service functions, reinforce its foundation in the North American market, continue increasing the presence of KOBELCO hydraulic excavators, and put a group-wide effort into growing its market share in North America. KOBELCO plans to begin its production with standard machines weighing 20-tons and larger; the company will increase its product line offerings and capacity in accordance with market development. Future production plans at the US facility are expected to include most of KOBELCO’s excavator models.

“We are very excited to begin a new phase of our growth in North America,” stated Morita. “With an eye on the future, KOBELCO is staying ahead of the competition and anticipating what the industry will need tomorrow. We look forward to becoming an integral part of the Spartanburg community and sharing our success and prosperity.”

A letter addressed to KOBELCO from Nikki Haley, Governor of South Carolina was read aloud at KOBELCO’s celebratory event. “[In South Carolina], we believe strongly in fostering growth among our businesses, particularly as it relates to manufacturing. We are known as a leader in the industry and companies like KOBELCO are putting South Carolina on the map worldwide as the home for future innovation in America. We appreciate [KOBELCO’s] decision to locate here and assure them that their confidence in us is not misplaced.”