Instead of a cash register 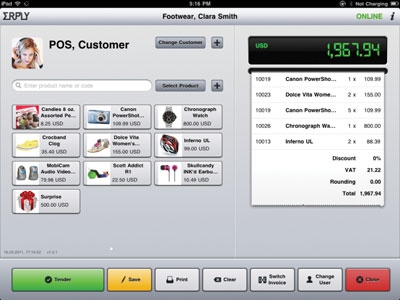 This screenshot from Point-of-Sale.net’s iPad app shows how the software can store customer accounts

There’s a lot that’s different about Parlour Coffee on Main Street in Winnipeg. It’s a shiny new business on a formerly downtrodden block. Its interior is minimalist, all wood grains and white paint. There are a few pieces of art on the walls, but there’s not the same clutter one sees in many other shops of its kind. Even the stools at the front window coffee bar are very basic: wood, with no backing.

The same goes for the front counter. Parlour’s coffee machine dominates that space, as it should, but there is something missing here, something that usually belongs on the front counter of any brick-and-mortar business, and one that’s been a business fixture in the three different centuries of its existence: the familiar hulk of a cash register. Instead, there is a sleek little iPad doing the job of a standard point-of-sale register. It is an idea that seems to be travelling virally amongst hipster coffee shops throughout North America, and it is one that may make it to your nearby rental outlet soon.

“We went with an iPad POS because we didn’t want to clutter our counter with a bulky system, as well as the price tag associated with traditional POS systems,” says Nils Vik of Parlour. “It works like a charm! Most POS systems are more than we need and it’s hard to find simple, easy-to-use software.”

The cash register has been a fixture ever since a man named James Ritty devised the machine in the late 1870s to keep his employees from stealing cash at his Dayton, Ohio, saloon.

The early models were pretty basic, more of a mechanical adding machine, without the electric motor and later additions like the paper receipt feature. “Their first model was inaccurate,” reads the website of the Massachusetts Institute of Technology. “It looked like a clock with a keyboard, with hands indicating dollars and cents instead of hours and minutes. The second was not much better. But the third prototype was a success.”

The register has changed form over the years, of course, and the tinkering has led to current-day variations like the self-checkout, the success of which has not yet been decided in the court of public opinion. So, it is perhaps not surprising that the cash register is undergoing yet another change, or series of changes. But this time, the changes are independent of even cash registers themselves. In the future you may not need a cash register to do the job of a cash register. The word “e-wallet” is being thrown about in the financial transactions sector, and while it is still early days these might eventually lead to changes that could render a stand-alone, single-use till obsolete. And there’s big things happening in the cellphone sector, too.

But for now, one of the neat-o POS alternatives available to storefronts is the iPad.

Vancouver’s Innocent Coffee on West 4th St. is another establishment that has eschewed the traditional cash register. Innocent Coffee’s Ya Wei Lin says that using an iPad as the shop’s cash register is both a design statement and a technological choice.

“We first saw it in a coffee shop in San Francisco and thought it was a really cool idea and a great counter space saver,” says Lin. “It’s working very well for us. We are a start-up coffee shop with very concise menu offerings so it wasn’t hard to find an appropriate app to run our operation.”

If you think that a mere app wouldn’t compete with something as enduring as the cash register, ask your iPhone-toting friend why they no longer use their SLR camera so much anymore. It is often because the quality of the photos that the iPhone takes rivals that of a stand-alone camera in many situations. While no one yet is writing the obituary for the camera, the buzz about the iPhone’s camera quality can work as a barometer as to what is happening with other traditional technological cornerstones of our lives.

One American company that is taking a serious run at turning tablets into cash registers is Square (a European rival is the Estonia-based Erply). Square is run by Jack Dorsey, one of the brains behind Twitter (he evidently works eight hours a day at Twitter, and eight hours a day at Square). Square’s initial offering to retailers was a small, handy, credit card reader that could easily plug into a smartphone with minimal hassle, and allowed many small businesses to easily process transactions.

According to Fortune magazine, their credit card reader has gone from processing $2 billion worth of business last year to an estimated $6 billion this year. And with the recent hiring of Android phone engineers, the Square is evidently on the path to strengthening its smartphone division, as well.

The idea, in many places outside of tech-savvy San Francisco, is still pretty novel. Square itself is only a three-year-old company. There’s a gee-whiz quality to the technology, which still retains its new car smell. But retailers like Lin find the application handy in many other ways.

“The iPad doubles as a store computer for web browsing, e-mailing and social networking because it’s portable,” says Lin. “The coolest thing we found was when out-of-town customers asked for directions, we could show them on the iPad.”

In terms of cost comparisons between a traditional setup and that of an iPad, Lin hints that there is a rather large savings for the Apple fan, eventually.

“The iPad itself is around $600-plus. The app fee is a one-time thing, which costs nearly nothing. When we first got it there were only a couple apps available in Canada for the iPad so the app cost $9.99. But now the same app is free because there have since been many apps developed.”

“Most POS requires not only an initial set-up fee but also a monthly fee. Some even charge system update fees. We can’t say for sure exactly how much we saved but it’s probably a lot of money.”

“I am not at liberty to say what it costs, but it has saved us thousands of dollars compared to other options we investigated,” he says.

It should be mentioned that using Square Register isn’t free. There is a 2.75 per cent charge for credit card transactions on Square products.

While some are enthusiastic about this new way to use one’s iPad, it’s still a pretty new development. As well, there are advantages that a cash register has over an iPad, and vice versa. An iPad obviously lacks a cash drawer while a cash register generally doesn’t have the analytics that are available to the iPad user.  And both of them may be usurped one day by the development of the e-wallet, the evolution of which is due for a lengthy series of growing pains, not the least of which is the adoption of common standards throughout the industry and amongst competitors. But for now, using your iPad as a cash register, for many, remains a pretty nifty way to do business.

Says Innocent Coffee’s Lin, “It really depends on the business operations and their needs. But we are very happy about taking this route and only have positive things to say about our experience so far.”

“I think that POS systems need to be fine-tuned for the type of business you run and what you want out of your software. There are always bugs to work out with any new POS, but overall it has been a pretty seamless experience.”