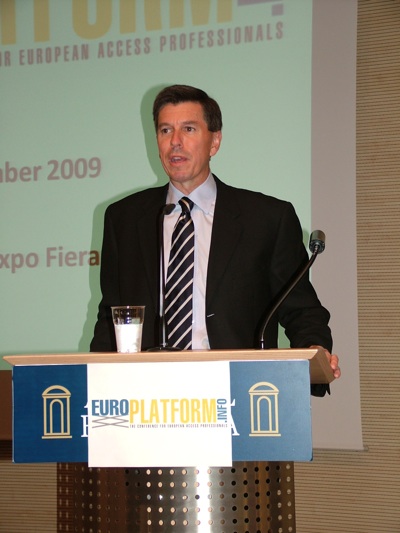 “The downturn is going to be longer and deeper than you can possibly believe it will be,” said Ford to the audience of about 100 senior and middle managers of European access rental companies. “Companies that thrive in this economy share a few common traits. First, they have a cushion of cash relative to their peers. Second, they continue to make strategic investments despite the economy, and third, they have a willingness to ‘go for the jugular,’ seizing this time to go aggressively after weaker competitors.”

Ford emphasized the importance of managing cash, sharing lessons from Terex’s daily operations. These include avoiding complex financial transactions, keeping trade terms short so as not to be hit by bad debt, selling off unproductive inventory, collecting cash and managing the supply chain to reduce incoming materials.
During a downturn where survival is the key, it is better for companies to be nimble rather than big, advised Ford. Cash becomes more important than market share. Not all items sold contribute equally to the bottom line. Businesses need to re-think their products and services and shed some of them.

He noted that with new equipment sales down 85 percent or more in some categories, there is not enough demand in the foreseeable future to sustain the number of manufacturers and brands that exist in the industry today.

“It seems increasingly likely to me that cash-strapped western manufacturers will be forced out of business or will be purchased by cash-flush Chinese competitors looking to establish a foothold in Europe or the United States,” he predicted.
Access rental companies have seen revenues down between 25 and 33 percent over last year and the outlook for near-term improvement is not rosy.

“We saw the number of aerial manufacturers decline in the downturn of 2002, from many to a handful,” said Ford. “We are likely to see a shakeout among rental companies as well.”

The call on investors, manufacturers and rental companies to manage cash coherently and responsibly was reiterated by other speakers at the conference, including Antonio Gomez de la Vega, director of JLG Financial Solutions, who examined the question of “Can Rental Companies Still Find Capital?” and Loxam’s chief operating officer Cees van der Kooij, who spoke on “Ten Things Not to Do in a Recession.”

Europlatform is a one-day conference focusing on access rental management and safety issues. It is jointly organized by Access International magazine and IPAF. The next Europlatform will be held in September 2010.

Watch for details at www.europlatform.info