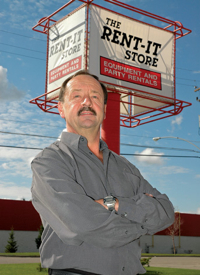 Aug. 4, 2010 – We regret to announce that Doug Mitchell passed away unexpectedly at his home in Saskatoon on Thursday, July 29, 2010 at the age of 58. He was the co-owner of The Rent-It Store in Saskatoon.

Aug. 4, 2010 – We regret to announce that Doug Mitchell passed away unexpectedly at his home in Saskatoon on Thursday, July 29, 2010 at the age of 58. He was the co-owner of The Rent-It Store in Saskatoon.

He is survived by his loving wife Janice and their three children: Deanna (Chris) Schreiner, Greg (Michelle) Mitchell and Mark (Naomi) Mitchell, as well as his five grandchildren Justin, Brianne, and Kyle Schreiner and Cole and Beau Mitchell. He also leaves behind his sisters Sharon (Stan) Sopczak of Outlook and Heather (Marvin) Funk of Carrot River; his mother-inlaw Agnes Saunders of Prince Albert, sistersin-law Sandra (Richard) Reutz, Barb (Doug) Jackson, Gail (Gord) Lyons and brother-inlaw Don (Delores) Saunders, as well as many nieces, nephews and friends. Doug was predeceased by his parents Sherwood and Elizabeth Mitchell, father-in-law Don Saunders and sister-in-law Myrna Doig.

Doug was born in Saskatoon, attended St. Phillips Elementary School, Holy Cross High School, and the University of Saskatchewan. He met his wife Janice in Saskatoon in 1970 and they were married on July 22, 1972. They continued to make their home and raise their children in Saskatoon and spent many weekends and endless holidays at their cabin, first at Emma Lake and later at Christopher Lake. Doug was always surrounded by many friends and acquaintances.

If desired, donations in memory of Doug may be made to a charity of the donor's choice. Arrangements are entrusted to John Janex at 306-955-1600.