The story of a happy whim

The striking orange and black sign quickly becomes visible while driving up St. Amable, Que.,’s main street as it starkly contrasts with the day’s abundant snow fall. Cornering the intersection between the street and the small parking lot, a yellow mid-size John Deer loader and a pick-up truck rigged with a plow on the front bumper act as inanimate greeters. 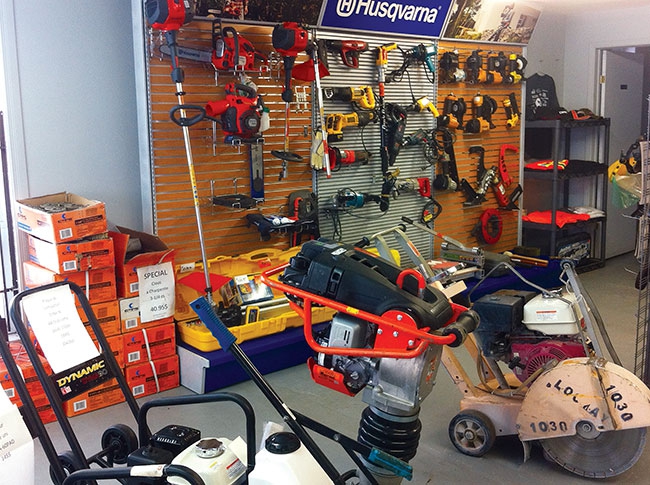 The striking orange and black sign quickly becomes visible while driving up St. Amable, Que.,’s main street as it starkly contrasts with the day’s abundant snow fall. Cornering the intersection between the street and the small parking lot, a yellow mid-size John Deer loader and a pick-up truck rigged with a plow on the front bumper act as inanimate greeters.

While still early in the morning, the compound is already as busy as a beehive, with all of Location Mayrand’s five-person workforce hard at work preparing deliveries and plowing the snow in the compound. The phone keeps ringing with calls ranging from prospective customers inquiring about the company’s services to a misinformed woman who thought she was calling an entirely different business. The man holding the phone takes a few minute amidst his full schedule and numerous interruptions from his employees to redirect the woman to what she is looking for – a gesture that speaks clearly of Mayrand’s friendly culture. The place is empty, yet there’s this sense that it’ll be a busy day.

Stéphane Mayrand greets me accompanied with his wife and business partner, Janet Silva, whom he met in a past, pre-entrepreneur life while working as a travelling manager for Canadian Tire. A warm welcome follows with smiles and a much-desired cup of coffee. The showroom showcases a plethora of different types of equipment ranging from table saws, weed cutters, small loaders and even BBQ equipment. At nine a.m., the store has already been open for three hours. “We open at six every weekday,” says 51-year-old owner Stéphane Mayrand. The store takes a break on weekends – well, Mayrand’s definition of a break, opening at eight on Saturday and nine on Sunday. “My wife has to tell me to stop working,” he jokes while both of them acknowledge he is a virtually unstoppable workhorse. She nods with a smile.

Entrepreneurial DNA
Born in Montreal’s Ahuntsic borough in 1963, Mayrand comes from a family of entrepreneurs who operated a well-known local business. His father, Guy, owned a chain of grocery stores in Montreal. They were sold years ago, but Mayrand retains a wholesale food store that borders Highway 40 in the borough of St-Léonard, mostly renowned for its wide selection of meat. His uncle was also a successful businessman. But while he inherited his kin’s entrepreneurial skills, his most cherished childhood memories go towards his grandmother, whose picture adorns the store’s main office with her kissing the couple’s youngest child, Adrien, on the forehead. “She is the one who mostly raised me,” he recalls while looking up at the framed photo with both love and an apparent deep sense of loss.

Much of Mayrand’s recipe for success runs in his DNA. “I’ve always been good with tools and with mechanics. It’s as if it were innate, which allowed me to be a self-taught jack-of-all-trades,” he says. After leaving school in the late seventies/early eighties, he was hired by a car parts dealer located in Montreal’s south-shore suburb of Longueuil as a back store clerk. “My boss told me that once I learned all of the car makers’ catalogues by heart, I could get promoted to the front desk, and that it should normally take no longer than a year,” he recalls. “Thing is, catalogues change every year or so as new models are released and others become discontinued.”  In his boss’ mind, it was a trick way to tell him he was looking forward to a long time in the back managing the inventory instead of moving up front to handle clients.

Within his first year on the job, Mayrand had memorised the books. Four years later, he was managing the store.

But such a quick ascension in a company he loved working for didn’t make him immune to a certain dissatisfaction. “The store eventually moved from a prime, highly visible location to a backstreet in a recently-developed industrial park,” he remembers. “Something changed in the way we conducted business. We had to adapt to the new location, which I hated, as there were much fewer clients just walking in the store. It was less human. I didn’t like it. Besides, I felt that I had done everything I wanted to do there, so I left.” Mayrand moved on to work with Canadian Tire then Zamboni before again feeling pressure to change careers. “I grew tired of travelling. When I was working for the Zamboni dealer, I had to drive across the [St. Lawrence] river to Ville St-Laurent, stuck in traffic. While working for Canadian Tire, I had to travel across Quebec. While I enjoy driving, things also changed and I was now married with children. I knew I had to find a job closer to home and moving was out of the question,” Mayrand says.

This time, fate, in the form of a chain of vaguely related events, gave the Mayrands a hand.

Change in a heartbeat
2007 started brutally for Stéphane when his beloved grandmother passed away, a tragedy which left him devastated. The strong, unshakeable workhorse emotionally fell on his knees. “I had to take a two-month unpaid leave to recover, something I never thought I’d have to do,” says Mayrand. He and Janet decided that a vacation under the Mexican sun would help speed the bereavement process. This is when Mayrand, “most likely affected by heatstroke,” turned to his wife while relaxing on the beach and uttered a life-changing sentence. “Let’s open a rental store,” he said.

Janet says she jumped out of her stupor, almost wanting to check if her husband’s sunburns had given way to fever. “Are you crazy? There’s no way that’s happening.” Despite her initial shock, Janet rose to the challenge and became an integral part of the operation, controlling all administrative aspects. Mayrand has no doubt this story would have come to an abrupt end without her support.

Back from Mexico, things happened really quickly. “We registered the company in February and were up and running by April,” says Mayrand, who also recalls how difficult it was to secure financing. One loan manager demonstrated a blatant lack of knowledge about the rental industry as well as complete disinterest. “She told me that rental stores can’t be financed since it’s considered similar to a pawn shop,” says Mayrand. He heard this in different forms over and over again as he was desperately trying to secure a loan. “I already had bought the equipment. All I had was $40,000 coming from a small inheritance from my grandmother and my own savings. I naively thought financing through banks would be easy.” There was a silver lining; all the difficulty obtaining loans meant Mayrand had no debt to reimburse on the business.

Business picked up with unexpected speed as the store was the only one in the quickly expanding small town to address the individual homeowner market. “St. Amable tripled its population in the last few years. People build houses and renovate. Landscapers are busy and not all of them own their own equipment. I made the decision not to play on the majors’ ground and leave the industrial market to them,” Mayrand says. “Individuals are an underestimated market. I also think the human’ approach to business is important and you find it much more when dealing with ordinary people than [large companies], where dealings can get very mechanical.” To this day, Mayrand & Fils draws 70 per cent of its clientele from homeowners and most of the remaining 30 per cent from small businesses, with a small percentage of its income from industrials. No advertising is required except for the highly visible sign by the road. The company’s website is a prime example of digital minimalism. “St. Amable is a suburban hamlet. Most people here work in the city. I get most of my industrial clients from word-of-mouth.” He recalls a time when the manager of a company was desperately trying to secure jacklifters for the next day after his usual supplier failed to deliver. “I made a few calls and worked until late at night. The lifts were available and delivered the next morning.” Mayrand has a 24-hour service policy, which mostly consists of him carrying an always-on cell phone that even rests on his bedside table.

While business has always been good from the start, two major events, one draped in tragedy, brought Mayrand to its current success. In 2008, major snowfalls broke records across the province, which gave him the idea of diversifying his activities. “I started a snow plowing service. I don’t remember sleeping during that winter.” During the first year and a half, he was his only employee. In 2012, the train explosion that laid waste to the small Eastern Townships village of Lac-Mégantic turned tragedy into opportunity for Mayrand when they became the main equipment supplier for RSR Canada, a sanitation company also located in St. Amable that inherited major cleaning contracts from the Quebec government. Mayrand rents and sells them pumps and generators. Since then, despite the lack of further catastrophes, Mayrand’s figures remained stable, boasting an average growth of 20 per cent annually since opening. “In 2012, we had a great year and it’s been that way since then,” explains Mayrand, who attributes this success to his diverse activites and focus on the individual market. “Big companies with multiple locations that supply major contractors depend on their customer’s economic health,” he points out. “People will always need to rent tools.” This element of Mayrand’s market explains why his figures remain the same through recessions and even without big, unexpected events.

Community involvement
Mayrand insists on the importance of community involvement and solidarity. He joined the Quebec Rental Association shortly after setting up shop and now acts as president, a mandate he truly enjoys. A few years ago, Mayrand’s hard-working habits took their toll and he suffered both a heart attack and a stroke, which prompted him to hire more employees, mostly young men. “It’s my way of teaching our youth the value of manual labor and work in general,” he says. Looking back at his life decision, he definitely doesn’t regret his sudden epiphany on the Mexican beach. His thoughts turn to three children, Ruben, 15, Adrien, 11, and Sabrina, 6. “I’ll also have something to leave to my kids,” Mayrand says.