Harrigan Rentals, only 52 years young this year, has had quite a history. It’s one of British Columbia’s oldest family owned-and-operated rental firms and it was founded by Jim Harrigan. 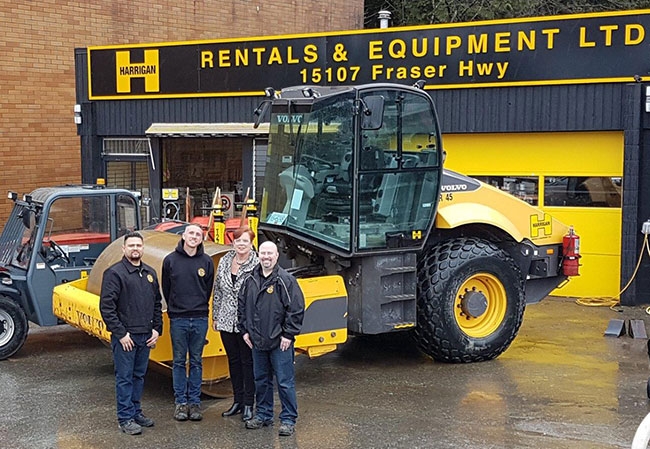 Jim grew up on a farm in Shepard, Alta., the youngest of 11 Irish Catholic children. You could say his career began at the age of 13 when, at school one day, he had an argument with his teacher. Not one to back down and realizing he was not going to win, Jim climbed out a window of the one-room schoolhouse, never to return. He was told by his hardworking parents that he would have to help support the family if he was not going to remain in school – and that’s just what he did.

“After a series of odd jobs, one of his first serious jobs was selling farm equipment,” explains Jim’s daughter Shelley. “He loved to tell the story of his first sale. He sold a combine harvester to a pair of spinsters in the heart of a wickedly cold Alberta winter. When asked the secret to his success on that first sale, he would say that he informed the ladies he would stay until spring if that is what it took to close the deal.” While that particular method of closing a deal might seem a tad outlandish, Shelley says it exemplified her dad’s perseverance and determination, traits which laid a strong foundation for his future success.

That success was also built on a longing inside Jim to be his own boss. After a successful stint at Homelite selling power equipment, he tried unsuccessfully to get investors to open a rental company with him. He then decided to go it alone and, despite having little money and no business plan, in 1967 he moved his young family to B.C. to make it happen. Shelley says his first location was a small room he purchased in an industrial building in Burnaby, and that he chose it simply because “the price was right.” Jim was on the road selling and Joan his wife did the books at home in the evening.

Jim knew he needed to do some marketing, but he also needed to get that done without spending very much money. “He began renting wooden barricades with flashing lights to the City of Burnaby at a competitive price,” Shelley recounts. “He stamped the company name in large black letters on a yellow background and it was very distinctive.” This was the beginning of the firm’s branding and sure enough, over time, Harrigan Rentals became somewhat of a household name in the region. Shelley says people would steal lights from the Harrigan Rental barricades and display them in their rec rooms as part of the party decor.

By the early 1970s, Jim was ready to expand and purchased a property in Burnaby. Not long after, he opened a second branch in Surrey, managed by his friend Dave MacIntyre until he retired. “Dad also tried his hand up in Fort McMurray in the ‘80s, opening a branch there, but being an absentee owner provided challenges and he closed it after a few years,” says Shelley. “In the mid-’80s, he opened a third location in the area. He found a property on the east side of Vancouver and it was perfect timing to capitalize on the construction boom for Expo.” With three locations, Jim now felt he had solid coverage in the lower mainland.

A new era
Fast forward to 2007. Jim was dividing his time between Scottsdale, Ariz., and B.C. In the late fall, he passed away at the age of 75.

Shelley had a big decision to make, but it really wasn’t a hard one. Even though she had no rental industry experience, she wanted to ensure her father’s legacy survived and thrived. “Actually, back in the early 2000s I had wanted to get into Dad’s business in a sales capacity but he was against it,” she says. “I believe he felt the equipment rental business was an environment that would be tough for a woman to handle, a sort of man’s world, and I can appreciate that, having children of my own.” However, at the time of his death, Shelley felt ready to take on whatever challenges lay ahead. She traded her suits and heels (used in her previous long-time position at a multi-national alcohol beverage firm) for a hard hat, steel-toed boots and a safety vest. And dug in.

The first change Shelley initiated was to set up the software that her father had purchased years before but never implemented. “He had a fantastic gut instinct for business, but my Dad was a pen and paper guy who got his leads from the paper version of the Journal of Commerce and from hanging around government offices after tenders were released, meeting with contractors,” Shelley explains. “I’d been employed at a multinational company and there was no way I could imagine operating the company without computer automation. Nothing was automated when I started.”

Shelley Harrigan with her team (left to right) Jamil Borge

Unfortunately, there were bigger problems than only paper records. On top of all she had to learn, and despite the fact that 2007 had been her father’s company’s best year, the market crash in the fall of 2008 hit the business like a sledgehammer. Shelley made the hard decision to close the Burnaby location and move all the employees to the two other branches. She also moved the head office to Port Moody. However, she was determined that not a single employee would be laid off, and she succeeded with that fairly ambitious goal.

“I think making sure everyone kept their jobs really made our staff understand that they were important and we would look after them, and it built their loyalty in return,” she says. “I really believe every person is valuable in our organization. We treat our employees like family. We believe in promoting people from within and this has created great depth and breadth of knowledge for employees of the rental business. Not only does this keep people interested and engaged in their success, but I think it is really good for a company to have people in management positions who have done the entry-level jobs and understand the day-to-day tasks involved.” At this point, many of the current 24 employees have been with the company over ten years and several others have celebrated 25-year anniversaries.

The economic downturn in 2008 wasn’t the only daunting challenge in Shelley’s path. In 2007, when Jim died, Harrigan Rentals also lost its long-time general manager. In addition, two senior employees left, one of whom set up his own competing rental businesses in the same market. “To say that it was tough for the next few years would be an understatement,” she says. “I might not have had any industry experience but I did have business education and experience, and I focussed on my most valuable assets, employees and customers. In the face of all the challenges, I believed the business had the ability to land on its feet and thrive because it was dedicated to its hard-working employees and they were dedicated to it. And because of its loyal customer base. But it was all a really big eye-opener for me. I came to understand how complex my father’s business was. I had a new appreciation for my Dad.”

Success today
Following in the footsteps of her father, Shelley can be seen regularly out at building sites, meeting with customers, listening to their ideas and asking for feedback in order to better understand their needs. She says it’s not uncommon for Harrigan to purchase equipment for a given customer to ensure that customer can get its job done. The business has come a long way, she says, from the original focus on traffic supply and small tools. It now carries a broad inventory, basically the same at both locations.

Strong competition is a constant issue. There are 59 rental stores in the region and Shelley says Harrigan Rentals never takes the loyalty of its customers for granted. “Like others, we see that the market has become increasingly competitive over the years with more independent rental houses as well as multinational companies,” she says. “In addition, all of the rental businesses are facing chronic skilled labour shortages. The big box retailers have also taken market share in their rental of home and garden equipment.”

However, like it has for the last five decades, Harrigan Rentals will continue the tradition of focusing on its core customers (contractors and developers) and providing quality equipment and exceptional service by employees with years of experience. “There are always changes and challenges and my happiest days are on the road with the sales guys, growing the business one customer at a time,” Shelley says. “I have no regrets leaving the wine industry to run the family business.”