Spend enough talking to Steve Voisin about his business and you’ll invariably hear about his luck and good fortune. 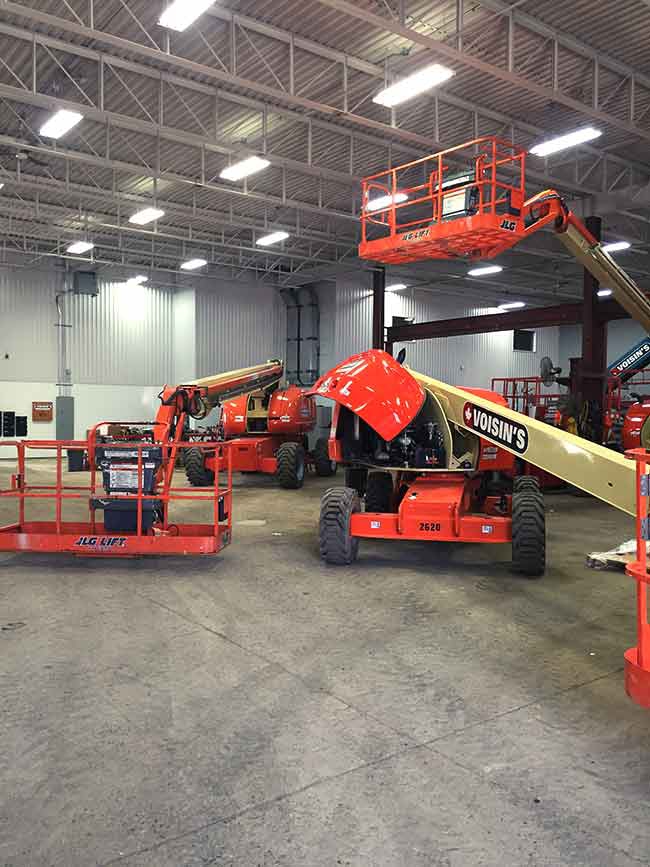 With 35 lifts in the “super boom” category alone Spend enough talking to Steve Voisin about his business and you’ll invariably hear about his luck and good fortune.

But the president of Guelph, Ont.-based Voisin’s Equipment Rental clearly knows how to furnish his own fortune by surrounding himself with great employees and key partners that have been as dependable as they’ve been helpful.

How else do you explain how a business less than a decade old and launched just months before the major U.S. economic collapse could not only survive, but thrive and continue to grow at a phenomenal rate over the last couple of years?

Clearly, there’s more to Voisin’s secret sauce than simply choosing very good employees and partners, but it cannot be overstated how big a part of the success story this has been.

After high school in the late 1980s, Voisin studied to become a structural steel tradesman, doing his apprenticeship with aerial work platform manufacturer, Skyjack. He wound up spending a decade with the company, working in its R&D program upon completion of the apprenticeship.

“They provided a lot of advancement for a young guy,” Voisin says, explaining how he ultimately grew into a sales role at Skyjack – positions usually filled by those with college or university backgrounds, he says.

“But they saw something in me,” he says.

Leaving Home Ain’t Easy
However, the sales job ultimately took him to Illinois. The Guelph-born and bred Voisin wasn’t thrilled with being away from his roots so he came home and landed a gig with Matthews Equipment, an aerial lift dealer.

Less than a year later, Matthews was acquired by Hertz Equipment Rental and Voisin’s career really took off, within a decade going from sales to a branch manager to sales manager for Eastern Canada and finally to operations manager and fleet manager, responsible for 17 stores and 349 employees.

Around 2006, Voisin left Hertz to run a dealership for Strongco and during his first week on the job, was approached by the CEO about selling off an aerial equipment rental business they had acquired as part of a larger deal.

“I was intrigued by it,” Voisin says.

A few months later he found himself back at Skyjack and curious about what happened to Strongco’s rental business. Sure enough, it was still on the market, so Steve teamed up with his brother Vince and bought the business.

Combining Steve’s industry knowledge with the leverage of Vince’s assets and equity (from his farming business) was a perfect match, and so it was that Voisin’s Equipment Rental was born in November 2007.

Bad Timing
Unfortunately, the timing of this purchase was not ideal.

Just a few months after the acquisition, the U.S. economy suffered a major meltdown, and the Canadian economy – while not dragged down nearly as far – softened as well.

Regardless, the brothers were able to use this to their advantage, buying plenty of used equipment out of the United States at discounted prices and not only growing the business through the first year but even taking some market share.

Steve handles the day-to-day operations, the buying and selling of equipment and oversight of both the counter and sales staff. Vince, the vice-president, deals with logistics, all the truck-related issues, computers, security, telephones and fencing –essentially the facilities side of the business.

There are a couple of key differences that sets the privately owned Voisin’s apart from most rental companies.

First off, instead of merely being a rental firm, half of Voisin’s revenue comes from equipment sales. While the rental business is generally local – mostly in the Greater Toronto Area and the Tri-City area of Cambridge, Kitchener and Guelph – the company has transacted sales to a much wider market. Voisin’s has sold aerial booms and scissor lifts to customers across North America and – periodically – even further abroad. All told, the company sells about 500 machines per year.

The Real Difference
More importantly, the fact that the company focuses exclusively on lift equipment is its real differentiator.

“A lot of our competitors and a lot of the general type rental companies rent a lot of different products. They rent jumping jacks, compaction equipment, skid steers, back hoes, construction earth moving equipment,” Steve says.

“We specialize in one thing and that’s scissor lifts, boom lifts and telescopic forklifts. So by specializing in one thing, you can become pretty good at it.”

“Not many rental companies would have as many large booms as we do,” Steve explains.

The company’s smallest lifts start at 12 feet and range upwards to 180 feet. As far as he knows, just one other company in Ontario has a boom that high, but Voisin’s was the first to offer this product. In the “super boom” class (125 feet and higher), Voisin’s has around 35 machines.

Steve says he’s not sure anyone in Ontario has more lifts of any size than they do. In fact, according to the annual Top 20 rankings by industry magazine Access Lift and Telehandlers, there isn’t likely a bigger independent aerial lift player in the entire nation, as Voisin’s consistently ranks around 16 or 17 with an aerial lift fleet size of just over 2,000 machines. No Canadian firm places above them.

“We’re pretty proud of that because it happened in eight years. So we went from a somewhat unknown to one of the market leaders,” Steve says.

Multiple Revenue Streams
Of course, the company doesn’t merely act as a rental agency and a reseller; it also offers training, sells parts, and engages in extensive servicing for customers, creating multiple streams of revenue for Voisin’s.

The real secret to its success has been a patient approach to hiring which has resulted in “a high quality group of employees,” Steve says.

His approach is to hire the character. He wants really dedicated employees that genuinely care, because in the end “your customers see it.”

Being an independent allows Voisin’s to be more user-friendly, Steve says. He has seen how rigid the national rental houses can be, but he takes a different approach.

“I give an awful lot of autonomy to my sales reps, managers and our rental department; they don’t have to come to me very often for approval to do anything. I tell them ‘just take care of the customer, regardless of what the situation is.’”

Steve believes that ethos is behind the source of much of the company’s growth – namely, referral business.

With 35 lifts in the “super boom” category alone

A Well-Oiled Machine
His staff is so good now that “it’s a common joke around here that this thing may run better when I’m not here,” Steve chuckles.

He’s also quick to credit some key business partners with helping the company get to where it has. You don’t often hear someone wax effusive about their financial institution, but that’s exactly what Steve did.

“We have a phenomenal relationship with the bank. The bank has been incredibly supportive. I would say at times the bank has more confidence in us than we have in ourselves,” he says.

The company also benefited from its relationship with Canadian Equipment Finance and Leasing Inc. (CEFL), especially early on in its history “when no one would lend us money because we were such a new business, and it wasn’t that we weren’t credit-worthy, but we didn’t have any credit history because we were such a young company,” Steve explains.

Not only did CEFL lend Voisin’s money and find the company other financing, but it was also a very good business advisor.

Steve also points to the accounting and legal firms he’s partnered with as key players in the development of the business. His accountant from RLB Guelph, in particular, seemed to be right on the same page with the brothers, anticipating their needs as the company grew.

Steve said he also really values his key suppliers, among them Skyjack, Genie, JLG and Haulotte. “They help us with factory training for our technicians, operator safety training, parts programs, etc. We cherish these relationships,” he says.

The Changing Landscape
While those business relationships really gave Voisin’s a shot in the arm, the changing industry landscape was also a big help.

In recent years, the province of Ontario has cracked down on safety procedures related to working from heights. You’d think that would present a challenge for the company, but instead Steve said it’s “more of an opportunity.”

As boom lifts replace ladders and scaffolding as the tools of choice on job and construction sites, the company’s business is, well, booming.

In fact, it’s at the point now where Steve’s 12-year-old boy – who hopes to sell the company’s products when he finishes school – gives dad the gears when he spots an opportunity the company hasn’t seized.

“If we’re driving around in the car and we drive by a building and it’s not one of our booms on the building, it’s one of our competitors, he lets me know that we should go and try to sell that guy one of our booms,” Steve laughs.

But just because Voisin’s doesn’t have a boom on every building doesn’t mean its growth has become stunted. Future expansion plans include adding a GTA location, something the company has been seeking for about a year – a two-to-three acre plot that would house a 10,000-to-20,000-square foot shop, ideally situated in Etobicoke or Mississauga.

Tale of the Tape
Here’s a look at some of the numbers — and the brothers — behind Voisin’s Equipment Rental:

Inventory: When the Voisin brothers first acquired the Strongco rental division, there were 329 machines. Within two years, they had sold 75 per cent of those and replaced them with better units. Today, Voisin’s boasts approximately 2,000 units within its inventory.

Property: The company currently has a 3.5 acre property featuring a 24,000 square foot building with a secondary three acre property up the street that acts as a holding yard for resale inventory. Voisin’s recently bought a three-acre property across the street from its headquarters, and plans to begin building on that in 2016.

Rentals: Voisin’s averages about 40-to-50 rentals per day during peak season (August to Christmas).

Customer Service: Voisin’s takes customer service so seriously that it offers 24-hour service, 365 days per year with an after-hour call centre and mechanics on call to quell any issues — around the clock.