March 19, 2015 - Terex Aerial Work Platforms (AWP) created a whole new look for The National WWII Museum in New Orleans during the 2015 Rental Show. The 100 foot tall outdoor facade was transformed with a specialized and astounding “projection mapping” animation that was three dimensional – and very blue. 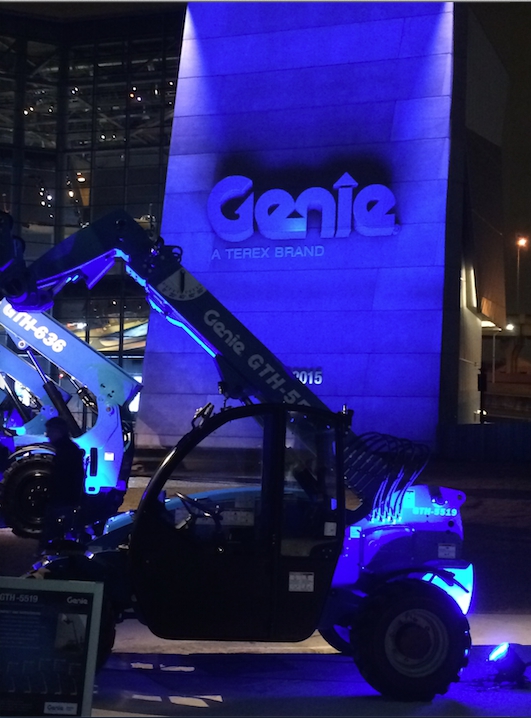 The 3D experience, celebrating the launch of several new products in the Genie GTH telehandler family, was projected on the seven-story wall of The National WWII Museum’s US Freedom Pavilion: The Boeing Center during the Genie customer appreciation party. The architecture of the Museum and the material of the wall lent itself exceptionally well to the high-tech show.

The Genie team collaborated with The Production Network and Go2 Productions of Vancouver, Canada to produce the event. It took four artists a total of 750 hours over the course of three weeks to complete the custom animation. The party’s 450 guests were excited and impressed by the towering blue display, which introduced the full Genie telehandler family and its new products to the crowd.

3D Projection Mapping is a projection technology used to turn objects/architecture, often irregularly shaped, into a display surface for video projection. These objects can range in complexity, but usually involve buildings, vehicles, custom built sets and complex industrial landscapes. By using a specialized software, Cinema 4D, a two – or three dimensional object is spatially mapped on the virtual program which mimics the real environment it is to be project on. From there, 3D animators add extra dimensions, optical illusions and notions of movement onto the previously static object, which is later re-projected onto the object to create a unique 3D experience.

“The location was great, because it allowed a perfect spot for the projectors to be placed, across from the event location on the roof of a building. This allowed us to place the projectors in a ‘sweet spot,’ which heightened the illusion of the mapping experience for the audience down below partaking in the event,” said Adrian Scott, Creative Director, Go2 Productions.