You won’t find homemade french fries among the items for rent or sale at Trowelex Rentals and Sales, located in Castlegar in B.C.’s West Kootenays, 600 kilometres east of Vancouver and 600 kilometres west of Calgary. 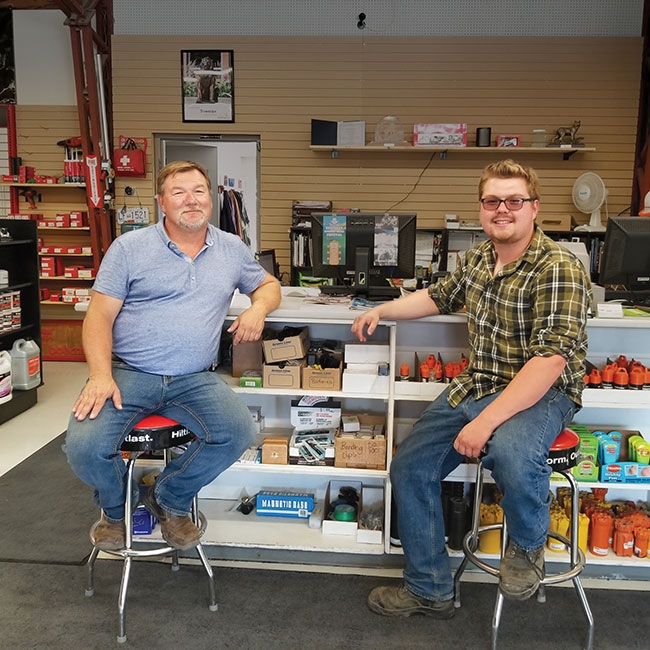 But, like the portable toilets, man-lifts, pumps and work clothing they do rent and sell, the fries would be a top item among the public, as demonstrated at a recent open house the company held to celebrate its 50th year of operation – its way of saying thank you to the community for its support.

“We had burgers and homemade fries. The fries were a big hit,” said current Trowelex owner, Harold Chernoff, 51, son of late company founder Nick Chernoff. “The open house was excellent. We saw a lot of people we haven’t seen in a long time. It wasn’t a sales pitch. No sales pitches, no nothing. We just wanted to do this as Trowelex to say thank you to the community.”

Born in Saskatchewan but growing up in Appledale, about 40 minutes north of Castlegar, Nick Chernoff decided at an early age school wasn’t for him.

He dropped out after grade two, never returning to any classroom. A lifelong stutterer, Chernoff also survived a nearly three-year stint in a Shriner’s Hospital in Spokane, Wash., the result of a nasty dog bite that prevented his leg from growing.

He turned to concrete, working as a foreman for companies in his late teens through early 20s. He married Vera, a young woman from the neighbouring community of Glade, and the Chernoffs had four children: Kevin, Nick Jr., and twins Harold and Shelly.

In 1968, Chernoff decided to branch out on his own. With a concrete trowel in mind, Chernoff wanted to call his fledgling company Trowel Concrete Contractors. He applied to register the name with the provincial government in Victoria. The government told Chernoff, sorry, that’s too broad of a name. “Maybe put an E-X behind it.”

With very little money, Chernoff bought a small building on Columbia Avenue in Castlegar then added a small trailer for an office. Today’s Trowelex building was constructed a few years later on the same piece of property. The building has been expanded about eight times.

“He cheaped out where he could,” said Harold. “The floor was only poured with two-by-four thickness to save money. And, 50 years later, there still is not a crack in it.”

Chernoff was selling things like compactors and snowmobiles. The fact he always had his own equipment was the main reason he got into the rental business. “People would ask to borrow his equipment overnight, or real quick – like a wheelbarrow or power trowel,” said Harold. “He would do it but would say he needed it back for his own work. One time, somebody forgot to return a piece of equipment they borrowed before Dad had to go work at 5:30 or 6 the next morning. He then said, ‘People have to pay from now on to borrow stuff.’”

Since that time Chernoff kept his company in the family and grew it into a business with a stellar reputation. Trowelex is Castlegar’s official Honda marine and power equipment dealer, along with being the city’s full-service Bobcat dealer. Trowelex rents portable toilets, pumps, material handling, man-lifts, portable power and heating, cooling and ventilation. It also rents out properties it owns. Inside the shop, Trowelex sells pre-cast products, protection systems, grout, safety clothing and gear, first aid equipment, personal protective equipment and tarps as just part of a lengthy list.

Trowelex does businesses with companies to Creston in the east; Rock Creek-Midway, B.C., to the west; Revelstoke to the north and beyond. They have supplied and serviced a mine site in Tuktoyaktuk in the Northwest Territories; supplied materials and services to sites in Quebec and Ontario and shipped supplies as far south as Brazil. “We have supplied specialty tooling and materials for Voith Hydro to facilitate building runners (turbines) used in hydroelectric work,” said Trowelex general manager, Rob Planiden, 52, who is in his 30th year with the company. “Far and wide, locally, provincially, nationally, internationally, we have a great reputation.”

Trowelex’s main customer, for more than 40 years, is 22 minutes down Highway 22 in Trail, B.C.: Teck Resources, formerly known as Teck Cominco.  “We supply Teck all of their rental needs, as well as to all the contractors that come on to their site,” said Planiden.

The company used to operate stores in Nelson, 45 minutes northeast of Castlegar, and in Campbell River, on B.C.’s Vancouver Island, but found it was hard for an independent company to have multiple stores. Personnel and good management people were needed to run things properly and the Chernoff family found it tough. So they focused on Castlegar, where the city has been the benefactor of Trowelex’s generosity for decades.

In 2017, the company donated more than $35,000 in cash and in-kind donations to many community events and projects. They are the exclusive supplier and main title sponsor of the Kootenay Country Music Festival. They have sponsored works of art along the city’s Castlegar Sculpture Walk. They sponsor a hockey player on Castlegar’s Selkirk College Saints hockey team. Trowelex longtime employee, Jean Bonin, has a three-page list of all the events and organizations Trowelex donates to, something that was very important to Nick.  “Nick started it because he was in Rotary,” says Harold. “It’s all aspects of the community we donate to and deal with. We do a lot with grad (Stanley Humphries Secondary School), Communities in Bloom, the city. We are probably one of the first places people come to in the first place because we can help out. It’s really important for us to be community-oriented.”

Community-oriented, yes. Trowelex is also family-oriented.  Ask Bonin and Planiden, the longest-serving of the 11 full-time staff, combining for 78 years of service with Trowelex. Bonin has been with the company for 48 years, hired from a Redi-Mix firm in Trail by Nick Chernoff. Her office, on this day, is laden with paper as she prepares a tax audit. Her office door is a sheet of plastic, placed by workers after a break-in at the store a couple years ago. Bonin discovered the plastic helped keep the heat in the office and she has warned that anybody thinking of replacing the plastic with an actual door will be “thrown out of here.” She is lovingly referred to by all employees as “Mom,” because, as she points out, she’s old enough to be everybody’s mother. She eschews job titles. “It’s like any business. I do what’s necessary,” said Bonin. “We are a family outfit, basically. The employees are like family members.” She tells the stories of two former employees, both of whom started as high school students after school cleaning out the shop. On Saturdays, they would learn how to run the equipment. One became so adept at operating a Bobcat he performed Bobcat square dancing in a local Castlegar festival. That student, on reference from Trowelex, applied for a job with the city of Castlegar and is still working there today.

The other student, said Bonin, went to university but would return home at the end of April and pop into the shop to see if his summer job was still available. He would work until Labour Day, then return to university. Several years prior to his death, Nick Chernoff underwent knee replacement surgery in Kelowna, in B.C.’s Okanagan region. A doctor at the hospital visited Nick after seeing Chernoff’s name on the list of surgeries. It was the student. “He went to medical school and stopped in to thank Nick for all the support and for basically putting him through medical school,” said Bonin.

Planiden, too, speaks highly of Chernoff. In 1988, Planiden, then 22, was working as a forest-fire fighter and heard through the grapevine that Trowelex was looking for a Class Three driver. He phoned Chernoff at his home on a Sunday. Chernoff and his son, Kevin, were in the midst of packaging up a mattress for Shelly’s move to Calgary when Chernoff told Planiden to come to his home for an interview.  “They were having trouble packaging the mattress. I jumped in, assisted, and Nick said I start tomorrow,” said Planiden, who estimates he’s only missed two days of work in 30 years, such is his love for the job and the pride he feels in Trowelex. He loves going to work every day. Sometimes, after helping out a customer with a middle-of-the-night emergency, Planiden will grab a few hours sleep at the shop then start another work day.  “There’s never a day that’s the same,” says Planiden. “There’s never a day that a customer doesn’t come in with a problem, asking for advice. Nick taught me when I started here one of the most important things I’m going to find out is I’m going to learn something new every day. Once I stop learning something new every day, it’s time to move on. And I’m still learning something new every day.” Planiden has done almost every job at Trowelex. He was thrown into the general manager position on May 27, 2016, when then-general manager Kevin Chernoff – also a city councillor in Castlegar – died suddenly. His death came 10 months after Nick Sr. died of a heart attack while getting a haircut. Two years earlier, Nick Jr. had died of medical complications.

With Shelly working for the Calgary city police, that left Harold to run the company. He is grooming his son, Cole, 19, to take over. Like his father, Cole started working for Trowelex when he was 12.  “I swept the floors, did all of my grandfather’s dirty jobs,” laughed Cole, halfway to a business degree from Selkirk College. “I learned everything from my grandfather and I’m learning every day from my dad. He teaches me every day, saying ‘Let’s do this together,’ or, ‘I’ll show you how to do this.’”  Cole sees Trowelex being around another 50 years, with him running it in 2068. He’s got big dreams for the company, he says, dreams that are currently in the ideas stage.

His father agrees that Trowelex will still be serving customers a half-century from now. “We have it down pretty good, our system here, how we do our rentals, deal with our customers,” said Harold. “We’re very diversified.”