It’s been less than a year since Matt Brun left a career in the insulation business to open Shediac Rentals and Sales, but he already knows it was a good choice. “I just love my job,” he says. “I’ve been in attics doing insulation, and it can be the worst. 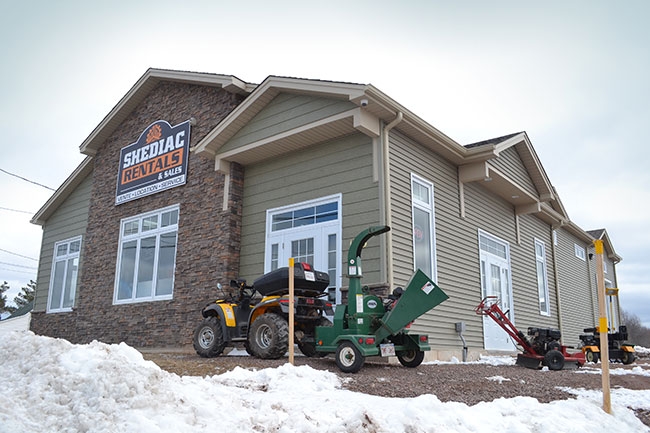 Brun and his father purpose-built the store when they couldn’t find any good rental options in Shediac. Shediac is a great place to visit (try the lobster!) but the town’s permanent population is only around 6

I would rather work 60 hours here than 20 hours in a fibreglass-filled attic. And I think people can sense that when they walk in. It’s just all smiles.”

They can also probably sense that just by looking around the store he owns with his dad Eddie and runs with store manager Mike Leger. Outside, the new story-and-a-half building sits on a well-landscaped, grassed lot on Shediac New Brunswick’s Main Street. Depending on the day, there might be an ATV, a compact loader or a wood chipper out there. Inside, it’s bright, open and clean where you could find generators along one windowed wall, a table saw and power tools along another, and lawn care and fishing equipment not far away.

Visitors will also get a pretty quick sense that the new business decided on a tactic that wasn’t being used by the bigger, more specialized rental shops in nearby Moncton. “Ever since opening on July 1, Mike and I have talked to people in our town to find out what they need,” says Brun. “So if people come in, ask for something, we get it, instead of assuming what they need. If you try to force feed something from a different town, it’s not going to work. So for us, that’s meant such a blend of inventory, everything from lobster cookers to fishing shanties and construction tools. And it’s the same for sales: don’t try to sell something that your town doesn’t really need or that three people down the road have.” He estimates that half of their customers are homeowners and tourists, half are contractors.

Another reason why they don’t cater to a specific set of clients is that there isn’t another rental shop in Shediac. Which, not surprisingly, was a big reason why Brun wanted to launch this business in the first place.

Before seeing that hole in the market, though, he had been looking around at businesses for sale for three or four years. “It’s a weird one, I know, but it’s actually one of my hobbies. If anything sounded good, I might have jumped into it. We looked at everything from campgrounds to golf courses. A lot of it sounded fun, but not very lucrative.”

A rental store, however, he thought, could be a solid business. The only problem was that there was no rental business to buy. Unfazed, Matt and his dad found an old house on a busy strip not far from the famous Parlee Beach and tore it down. In its place, they built a 3,500-square-foot building, about half of which is the storefront, the other half being storage for the business’s seasonally rotating inventory. They also built a large storage building behind. “A lot of people were saying, ‘Wow, building all of this is pretty elaborate for your first year,’” says Brun. “But if you look in Shediac, there was nothing to be rented. And if you look at my mortgage, it’s a lot cheaper than most rents because I did it myself and I had a background in it.”

That background included 15 years in his family’s insulation business, Excel Weatherseal Insulation, where Matt worked his way up from labourer to a job running the business with his dad. When he left, he had a solid list of business contacts to get him started at Shediac Rentals and Sales.

Those contacts weren’t everything, though, not by a long a shot, he says. “The tools I didn’t know too well in terms of where do you get a thousand different tools from a thousand different places.” He found his answers with help from Nancy and Randy Crosby at Classic Rentals in Truro, N.S., and his broker at Rentquip, Dan MacIntosh. “They also helped me avoid certain mistakes that would be crucial in your first year. They told me to take it slow, listen to your clientele, and they told me about certain pieces of equipment to avoid, which, instead of listening to, I got into – but only because the clientele wanted it.”

Mike Leger has been huge, too, he adds, putting to good use his 30 years at Prime Fasteners, the largest distributor of pneumatic fastening equipment and power tools in Atlantic Canada. It’s just the two of them here remember, both working upwards of 50- to 60-hour work weeks apiece.

“One thing I learned in business is that you have to keep a tight ship, so that’s why with two guys we work a lot,” says Brun. “But it’s like a family relationship and between the two of us it’s been going really well. I don’t think either of us would have done as well apart but together we complement each other and it works.”

The two had to delay opening for a couple of months in the spring of 2016, but ever since throwing open their doors on Canada Day, business has been good, says Brun. “I thought in the wintertime it would slow down a little bit, but it’s picking up slowly and mostly because people are catching wind of us. More and more people are finding out about us, so it’s been very positive.”

They’ve been finding out about them through word-of-mouth and standard advertising, not to mention Brun’s knocks at their doors. He hasn’t yet finished his canvassing of local business that might need Shediac Rentals and Sales, but his intention is to hit every one, shake hands with the owners and tell them that he’s the new kid, willing to do almost anything.

Brun and his father purpose-built the store when they couldn’t find any good rental options in Shediac. Shediac is a great place to visit (try the lobster!) but the town’s permanent population is only around 6

Once they call him back or stop by the shop on Main Street, the goal is to do whatever it takes to supply the equipment they need, whether that means getting it in-house or finding it at a nearby company, and showing them how to use it if need be.

The latter part of that goal can sometimes be a challenge since Brun and Leger are still learning the intricacies and best ways to use every piece of equipment they have. But, as most do-it-yourself homeowners know, there is a video out there for learning how to use almost anything. Realizing this, the two installed a large flat-screen television behind the counter where they can show how-to videos to people who need tips. “We had a guy who wanted to do the backsplash for his shower and had never done it before,” says Brun. “I had never done it before either, but we had all the tools. So we used a how-to video that he stayed to watch. He left very confident and came back to say that it worked like a charm.”

As for the future of Shediac Rentals and Sales – and the industry in general – Brun sees technology like those how-to videos playing a bigger role in the business. He also sees a refinement of how he and Leger have tried to do things since the beginning. That is, renting and selling only the tools and equipment customers need and making every customer feel welcome, whether they’re contractors, homeowners or tourists. “I’d be stupid to guess at the future of something that I’ve only just started, but the only thing I can do is try to be the nice place to go, try to cater to everybody and make everybody feel at home. We cosmetically made the store so that everybody would feel welcome. It doesn’t matter your gender or age. So our main focus is to try to keep that because the main problem with renting and selling tools and equipment is that people can feel intimidated. But if there is a regular-looking store that’s nice, with shiny paint, that has the how-to videos, the willingness to go out of our way to help – that’s what people want, I think.”

If he’s right, Shediac Rentals and Sales may have to grow. But that shouldn’t be a problem, says Brun. Though they don’t want the storefront or lawn area to become too cluttered, they do have ample storage space in the main building and the one behind. And if they have to store anything offsite in the future, that’s fine, he adds. “We may not have the land to grow, but whatever it takes, I’m ready to do it.”

And no wonder. The more success he finds here, the more those days of insulating attics become distant memories. “We love our job, we genuinely do,” says Brun. “And when people walk in, we just hope they find it friendly and clean. We tell them right away that we’re just two guys, but that we’re here to help them and that if we don’t have all the answers, we’ll find them.”