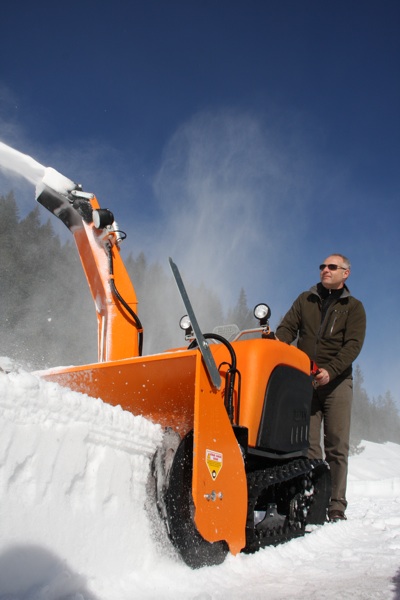 Sept. 7, 2011 - Endowing its Snowbob 9018T with power, speed, simplicity and comfort as the most important design criteria, Eliet has created a compact, powerful, high-performance machine capable of dealing with the most daunting tasks of snow clearing while maintaining a total focus on achieving the desired results.

Sept. 7, 2011 – Endowing its Snowbob 9018T with power, speed, simplicity and comfort as
the most important design criteria, Eliet has created a compact,
powerful, high-performance machine capable of dealing with the most
daunting tasks of snow clearing while maintaining a total focus on
achieving the desired results.

An innovative aspect of the product is the fact that the
Snowbob, in contrast to other snow blowers, is not steered by cutting
power to one of the tracks or by braking action on one track, but rather
by actively controlling the individual speed for each track. By having
one track run faster than the other, the operator can steer the machine
along a wide curve, and by putting one track in drive and the other in
reverse, he can pivot the snow blower on its own axis. And the control for making turns with the Snowbob is simplicity itself. The
machine turns by simply moving the central joystick to the left or to
the right. The farther the joystick is moved to this side or that, the
tighter will be the radius of the turning movement. This Zero-Turn offers a number of significant advantages:

1.
During the turn, both tracks remain in motion, thus maintaining a
better grip on the snow and ensuring the operator of better control of
the machine.

2. In contrast to other snow blowers, the Snowbob's
pivotal point does not lie on the halted track but is located around a
virtual axis line in the centre of the machine. As a result, the Snowbob
does not at this pivotal point have to counteract the stiff resistance
caused by the friction between the tracks and the contact surface, thus
avoiding skidding of the powered track.

3. Starting the turning
motion is for the Snowbob simply one continuous fluid movement. Other
snow blowers tend to stall intermittently when they are making their
turns, whereby the inertia of their mass accelerates the tracks'
slippage when they start moving again.

4. When, during removal of
heavy snow banks, the operator finds himself in a situation where the
machine is on the verge of getting stuck in deep snow, the Snowbob, with
its active power activated on both of its tracks, is more likely to dig
itself out of trouble without outside help.