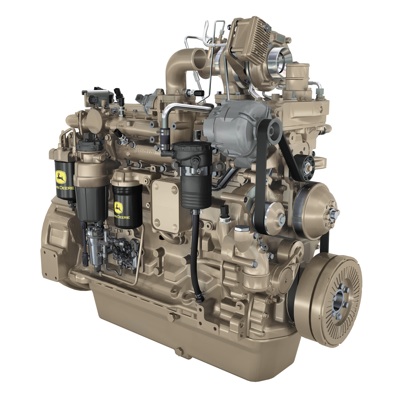 “Becoming one of the first engine manufacturers to certify engines in
the 75 HP to 174 HP power category provides further
evidence that our emissions-reduction solution is the right technology
right now,” said Doug Laudick, product planning manager for JDPS. “Our
OEMs and customers can be confident that we will deliver not only
emissions compliance, but also the performance, reliability, durability
and low operating costs they expect from John Deere.”

John Deere met the challenge of Interim Tier 4/Stage III B regulations
by starting with their proven PowerTech Plus Tier 3/Stage III A engine
platform  – which includes cooled exhaust gas recirculation for NOx
control – and adding an exhaust filter for reducing particulates. Engines in the 75 HP to 174 HP power range will feature full-authority
electronic controls, a four-valve cylinder head, a high-pressure fuel
system, wastegate or variable geometry turbocharging and an air-to-air
aftercooling system.

“Through rigorous field and lab testing, we ensure that our engines
will meet the unique challenges of off-highway applications — including
extreme vibration, high temperatures and duty cycles — in addition to
new stringent emissions regulations,” Laudick said.