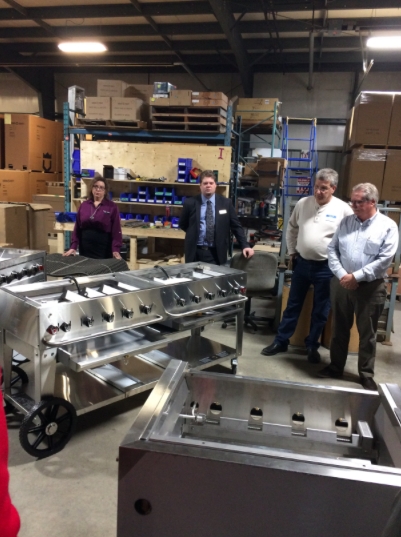 Andy Incitti, president of Crown Verity, along with his staff welcomed everyone to their place of business. After the cocktail hour Todd Stone, director of operations, led the group tour through their manufacturing facility and showed how their BBQ’s are built on an assembly system at a rate of 18 per day. Stone explained some of the new features that have been incorporated into the product line including the fact that the drip tray is now accessed from the front of the unit for easier cleaning and that the radiants are now held in place with a pin as opposed to a screw which makes replacement and cleaning much more convenient.

Another bit of news is that the company is setting up a manufacturing facility in Bowling Green, KY (same place as where the Corvette is built) to facilitate sales and shipping to the US market. The new plant will be operational by September.

After the tour, the group went back to the adjacent building which was purchased 18 months ago and is used as a demonstration room, warehouse of completed units and home for the sales and marketing team. Instead of the usual sit-down dinner, chefs used the built-in Crown Verity cooking products to provide delicious “finger food” that consisted of strips of steak, chicken, garlic jumbo shrimp, sausage pieces along with other  delectable items. The food was amazing!

While the food was being served, the crowd participated in a casino night where “winnings” were converted to draw tickets for seven gift baskets (Jeff Elmquist from Centec won three of them while Paul Everitt from Rentquip Canada won two!).

As for the business portion of the night, Michelle Nicol from Higgins Event Rentals was elected 2nd vice president. The Director at Large position that Nicol held now needs to be filled. Interested people are encouraged to contact a board member if you are interested in volunteering.

The next CRA – Ontario meeting will take place May 16th at Lind Equipment in Markham.