New research shows propane may be your cleanest bet. 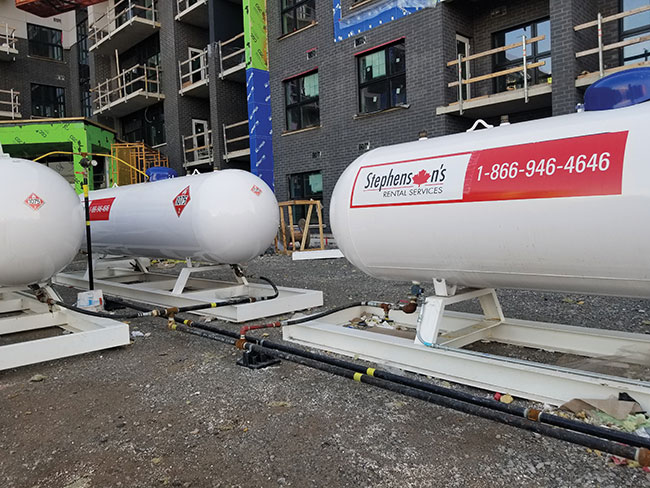 According to the Canadian Propane Association, around 93 percent of Canadian propane is a by-product of natural gas production and is not considered a greenhouse gas before it’s burnt for use. Photos courtesy of Mario Muscat

Net-zero emissions by…” the phrase seems to be everywhere. As most governments world-wide have begun the ardent quest to reduce greenhouse gas emissions in their jurisdictions, many companies are searching for ways to reduce their carbon footprint and capitalize on the various government incentives for GHG reductions.

A recent study by IHS Markit revealed that the average GHG intensity for Canadian propane is 72 grams of carbon dioxide equivalent per megajoule of energy (g/mj). That hefty calculation shows the carbon intensity of a fuel – the amount of GHG emissions it releases in its lifecycle – from production to use.

“What the study shows is that by switching from diesel to propane, for example, you reduce your carbon intensity and GHG emissions by 30 percent,” says Shannon Watt, president and CEO of the Canadian Propane Association.

Compared to Canadian propane’s carbon intensity of 72 g/mj, diesel clocks in at a rating of 100 and gasoline at 92, according to Environment Climate Change Canada, a federal organization. ECCC has estimated that propane’s carbon-intensity is 75 g/mj, but the new study moves that baseline down by about three percent.

“We were happy with the results because now it gives us a new baseline to work with,” says Watt. As Canada and other countries examine options for a net-zero future, Watt says propane can become part of the solution for companies who are looking to reduce their emissions. “The European Union and even the United States have already started using and selling renewable propane, which has an even lower carbon intensity than traditional propane,” says Watt.

Renewable propane, which is made from cooking oil and other waste products and drastically cuts propane’s already-low carbon intensity, is something that the propane industry is working on making a reality for Canadians.

“It’s also known as bio-propane, and it is a non-fossil fuel that is produced from 100-percent-renewable raw materials. Usually inexpensive and abundant feedstock like animal fat, algae and cooking oil,” says Watt.

Beyond producing renewable propane from scratch, Watt explains that propane can also be blended with renewable dimethyl ether, a new fuel source made from feedstocks like dairy waste, biogas or landfills. Watt points out that companies like Oberon Fuels in California are already using the blend for up to a 60-percent reduction in carbon emissions from traditional propane. 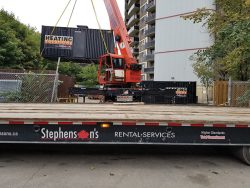 With the ability to reduce carbon intensity by 30 percent (when compared to using diesel) and a major reduction in greenhouse gas emissions, using propane can become part of the solution.

Many equipment stores already rent out propane. John Flint is the director of heating and climate solutions at Stephenson’s Rental Services. He says the company’s heating division began in 1999, and now he manages a fleet of over 100,000 heating assets and 20,000 propane tanks from Stephenson’s 30,000-square-foot headquarters in Mississauga, Ont., as well as in multiple regional locations.

“The beauty of propane is that it’s fast and flexible. You get large volumes of heat in a small package compared to any other source,” says Flint.

“When it comes down to it, propane is absolutely cleaner than diesel, 100 percent,” says Flint. In his long tenure at Stephenson’s, he’s overseen a lot of the R&D which has gone into the heating equipment and fuel-supplies the company has in-house. “We strive for constant innovations in the heating field with new products coming out yearly that have better technologies for energy efficiency. It’s important to stay at the forefront.”

Like many rental stores that carry propane, typical products range from 20-pound tanks to 420-pound propane cylinders, which Flint says takes care of the typical builder working on residential buildings. But where Stephenson’s propane fleet has become a necessity has been at larger builds like hospital jobs and high-rise buildings where clients often can’t get the infrastructure for other heating sources quick enough. For those jobs, he turns to 1,000-, 2,000-, even up to 10,000-U.S.-water-gallon propane tanks.

One of his more interesting assignments was utilizing the company’s portable mechanical rooms to heat two occupied apartment buildings during an emergency no-heat call. “It was the middle of winter and we needed to supply three boiler rooms to two apartment buildings for domestic hot water and heating for around 650 tenants. We installed our portable mechanical rooms in a few days on bulk propane. I don’t know if we could have done it that quick with another type of fuel.”

“The world is changing and conversations about GHG emissions are common, especially amongst the larger contractors” says Flint. Contractors want to deal with rental companies with strong ethics and a long, proven track record of helping them manage energy and emission reduction strategies. Propane plays a significant role when natural gas isn’t readily available, according to Flint.

For construction workers, propane is also much safer to use indoors compared to diesel or gasoline. “So, for indoor construction sites where you’re using heavy equipment inside, you can use propane to power forklifts or other equipment safely with a carbon monoxide detector,” says Watt.

As for Flint, he says he’s noticed a trend across the country. “Booms, lifts and forklifts that use propane are commonplace, while other equipment such as propane generators are accepted in western Canada, but that’s not the case in Ontario,” he says. Between the lack of rental stores promoting propane equipment to customers and the lack of manufacturers actually making them, he thinks that the industry is actually missing out on a fuel that could help transition as the industry moves toward equipment electrification. “While natural gas is cleaner, propane can provide the volume, the capacity and the BTUs you need in a small, portable package that runs a long time. It would be an alternative to electric-powered.” 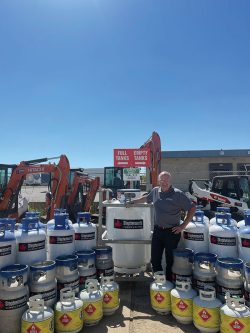 According to the study, in some Canadian jurisdictions, propane is cleaner than the electricity grid since propane is not mined like battery material.

In 2008, an incident in Toronto sent an orange cloud of fire and smoke billowing over North York. The explosion caused two fatalities and the evacuation of 12,000 people in the neighbourhood, according to the Canadian Disaster Database, a public record of disasters from the Canadian government. In August 2010, a 367-page report by the Ontario Fire Marshal’s Office revealed that propane was released from a hose after an illegal tank-to-tank transfer, something that the Technical Standards and Safety Authority in Ontario reported it had warned the company about in 2006. As a result, TSSA and the propane industry have implemented a significant number of safety programs and requirements that have made the industry even safer.

In 2000, the Ontario government released a new version of its Safety Act. In it, the act specifies the policies and procedures for training professionals to receive a Record of Training to handle fuels. The act has been regularly updated since then, with a 2020 amendment that made it mandatory for all training providers to renew their accreditation every three years, a renewal that the CPA was already requiring through its Propane Training Institute.

“Of course, the industry is completely committed to the safe handling of propane,” says Watt. Through the CPA’s propane training institute, Watt says that the association is fostering a culture of safety to ensure workers are operating with the best practices in mind. The training institute issues around 30,000 certificates a year. “Regulations require that anyone who commercially handles propane must have a certificate. We have people from across the industry, from wholesalers to retailers and manufacturers, who use our training on a regular basis,” says Watt.

At Stephenson’s, the company’s propane ROT is offered multiple times a week throughout the busy season (winter and fall) and provides training on safe handling, storage, transportation and most importantly, the installation of construction heaters.

“Rather than waiting for demand before scheduling the training classes, we run them often. It’s about making it as easy as possible for customers to get safety training they need, so that they use the equipment properly and remain safe,” says Flint.

In response, and in order to still supply customers with heat and power options, some heavy-equipment rental stores supply infra-red and indirect heaters, but both are diesel-powered and produce carbon dioxide.

“The world is changing and conversations about GHG emissions are common, especially among the larger contractors,” says Flint. Contractors want to deal with rental companies with strong ethics and a long, proven track record of helping them manage energy and emission-reduction strategies, according to Flint.

As for the impact of the government’s ambitious plans for net-zero futures, propane offers a low-carbon alternative to diesel, oil and gasoline. With provincial carbon taxes being mandated from sea-to-shining-sea and the federal Clean Fuels Regulations coming into force this past June, supplying customers with low-carbon intensity fuels may be a way for rental stores to access government incentives and provide their customers a reliable energy source with low GHG emissions.