Features Tech tips
Against the odds

Any contractor will tell you productivity is of vital importance on every project. 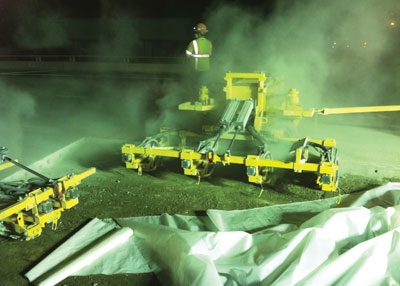 Cioffi/Liberta worked day and night to meet the Ohio Department of Transportation’s seemingly impossible deadlines. Downtime was not an option.

Any contractor will tell you productivity is of vital importance on every project. Between tight deadlines, penalties for delay of completion and a dedication to exceed personal expectations on every job, construction crews have every reason to ensure uptime remains high.

In the case of road repair projects when live traffic is thrown into the mix, the urgency to complete the work and move the crews off the road quickly is that much greater. And it’s that exact reason an 18-month road repair project in Cuyahoga County, Ohio, pushed the limits of efficiency for one local concrete crew.

Sprague Road in Cuyahoga County is the main east/west artery between the cities of North Royalton and Parma. As such, it sees a lot of daily traffic and has taken its fair share of abuse over the years. With funds limited in recent years, Sprague Road was one of many rehabilitation projects placed on the back burner, and one in dire need of repair. In fact, one particular two-mile stretch of the road had been slated for a major overhaul. When the Cuyahoga County Engineers received an LPA grant in early 2011 to fund the work, the project was immediately put in motion.

The original project scope on Sprague Road called for the repair of approximately 53 per cent of the designated stretch of roadway. Cuyahoga County engineers estimated about 38,000 square yards of concrete would need to be removed, reinforced with rebar, replaced and overlaid with 3 1/4-inch asphalt. The project also called for drainage repairs, a new sidewalk and guiderail installation, striping and landscaping. All in all, an 18-month project that carried a $5 million dollar price tag.

An Akron, Ohio-based construction company, Cioffi/Liberta Construction, secured the winning bid and was awarded the project, which was set to begin in April 2011. No stranger to highway repair projects, the family-owned company is primarily focused in the concrete industry, with roadway rehab one of its specialties. The company also has experience on a wide range of projects in the residential and public works arenas.

With experience and knowledge under its belt, Cioffi/Liberta was ready to dive in head first and get the project in motion. The company dedicated a crew of 16, led by John Chyla, project superintendent, and Mike Totaro, operations manager. Both were relatively new to Cioffi/Liberta, yet experienced veterans in the heavy highway construction industry.

In addition to expertise and drive, Totaro brought something else important to the project: pneumatic dowel drilling equipment from E-Z Drill. A manufacturer of drilling and doweling equipment for approximately 25 years, E-Z Drill offers a variety of machines, including on-grade, on-slab and equipment-mounted units with gang options from single up to five-gangs. With a project that would daily consist of dozens of concrete patches requiring reinforcement bars, thousands of precise holes would need to be drilled. Such a large number of holes in such a short amount of time made it necessary to have productive, reliable drilling equipment.

“I have been in the industry for more than 30 years, and have been using E-Z Drill equipment for nearly 25 of those,” Totaro said. “I had already briefly introduced the crew to the equipment, so we were all eager to see what the drills could do on the Sprague Road project.”

Indy Equipment & Supply, a distributor of E-Z Drill equipment in Cleveland, supplied the drills to Cioffi-Liberta Construction. Totaro worked closely with Derek Shelt, service manager, to get the proper mix of units, as well as accessories to tackle the job.

While the engineers’ original project scope seemed like a tall order to begin with, Cioffi/Liberta quickly realized the project was going to become much more challenging. First, the timeline was significantly cut.

“Because Sprague Road is such a major artery, the Ohio Department of Transportation and the engineers decided they simply couldn’t let this project go on for 18 months,” Chyla explained. “We were told we would actually need to complete the project in six months – one-third the amount of time as defined in the original estimate.”

If that wasn’t challenging enough, the road proved to be in much worse shape than the engineers originally thought. The project scope quickly expanded from replacing 53 per cent of the 52-foot-wide roadway, to replacing 77 per cent.

“Anyone who has ever worked in the highway rehab industry knows that this expanded scope is virtually unheard of,” Chyla said. “Typically, when a project gets to a point where this much of the road is being repaired, the scope will call for a complete rebuild of the entire road.” However, in the case of Sprague Road, ODOT and the Cuyahoga County Engineers decided to move forward with the repair.

Still confident and ready for the challenge, Cioffi/Liberta’s 16-man crew arrived onsite armed with a total of five E-Z Drill units. Each unit was different and assigned to a specific portion of the drilling. The Model 210 Twin Vertical was used in the early stages of the repair to pull patches, typically about six feet long by 10 feet wide and nine inches thick, according to Chyla.

After the patches were fully removed and cleaned up, the actual drilling portion began. The crew had an EQ MT 210-3 unit, which is a three-gang equipment mounted unit, a Model 65B single-gang on-grade drill and two Model 210B slab-rider units, one single and one two-gang.

“On average, we were replacing about 80 patches per day,” Totaro estimated, “making it imperative to have a variety of drills to match the various logistical conditions along the road.”

It was also imperative the crew complete the drilling portion quickly in order to keep pace with the fresh concrete pours, something Chyla felt early on would be one of the most challenging parts of the job.

“We needed to complete a certain amount of work per day to stay with the progress schedule, and the drilling was either going to make us or break us,” he explained. “Thankfully, we didn’t have to do this amount of drilling by hand.”

Exceeding the engineers’ original estimate, the crew was pouring more than 400 square yards of fresh concrete daily, which required the drilling of more than 1,600 holes per day. Describing the project as an “astronomical amount” of drilling, Chyla’s primary concerns were speed and precision. Not only did the holes need to be drilled quickly, they also had to meet the engineers’ spec. One-and-one-quarter-inch dowel bars were required, meaning each of the thousands of holes had to be the exact same diameter and spaced precisely. Each hole had to be identical, from the initial drilling to the cleaning. According to Chyla, “It would have been impossible to do this amount of drilling without the E-Z Drill equipment. It’s all about productivity and precision.”

Additional drilling was required every 25 to 30 inches along the length of the road for installation of an anchor and hook bolt, which tied together the longitudinal joints. With the extensive amount of drilling, the crew benefited from the E-Z Drill units’ ability to work quickly and accurately, and without much effort on the operator’s part.

“I trained the crew on the E-Z Drill equipment prior to the project, but this was the first time any of them actually ran the equipment on a jobsite,” Totaro said. “I wasn’t nervous though, and it was about as smooth and seamless a process as I could have imagined.”

With the drilling portion going extremely well, the crew was able to shift focus to the other major, unexpected challenge – the weather.

“We dealt with so many rain days and delays,” Chyla recalled. In fact, the summer of 2011 ended up in the record books as the rainiest in the county’s history.

“With the weather restricting our work on an already-tight timeline, it just further brought to light the need for good, reliable equipment,” Totaro said. “If we didn’t have equipment we could depend on, there’s no way we could have kept pace.”

In addition to precision and reliability, the E-Z Drill units delivered high uptime, a benefit Totaro attributes to the pneumatic operation.

“The drills pretty much took care of themselves, and we didn’t have to spend hardly any time on maintenance or repairs,” he said. “And I don’t recall any unscheduled downtime due to equipment failure. It was fantastic.”

“Not only did Indy provide us with the E-Z Drill units at the start of the project, it supplied everything we needed to keep the drills up and running throughout,” Totaro said. “From drill steel and bits to the peace of mind knowing Derek and his crew were there for us, they really helped us succeed in this project.”

Despite the project’s expanded scope, reduced timeline and the unpredictable weather, the Cioffi/Liberta crew continually met deadlines, surpassing the county and ODOT’s expectations. During progress meetings, Chyla recalls, people were “astonished” that the project was going along at the scheduled pace, especially considering all the outside factors.

Weathering everything that was thrown its way, Cioffi/Liberta was able to successfully complete the concrete portion of the Sprague Road project in just three months. After the concrete work was finished, subcontractors came in to overlay 3 ¼-inch of surface course asphalt, as well as complete the pavement markings. Cioffi/Liberta Construction also hired a subcontractor to complete the area’s landscaping and guardrail installation along the stretch. The crew wrapped the entire Sprague Road project on Nov. 18, 2011 – just seven months after it began, and only a month off from the desired six-month completion timeline.