In the summer of 1958, New Brunswick industrialist K.C. Irving walked into one of his logging camps in the interior of the province and didn’t like what he saw: cramped worker accommodations, uncomfortable common spaces and inefficient systems. 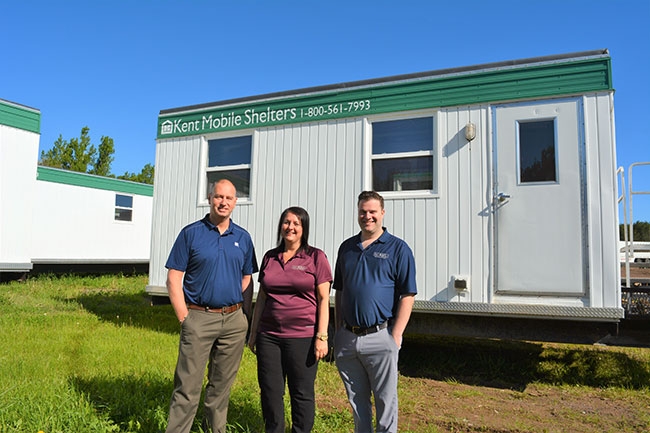 Kent Mobile Shelters achieves a lot with a lean organization employing just 10 people in two locations. Here are Lewis Harris (left) In the summer of 1958

He knew his employees deserved better, and so he bought a new logging camp in Quebec and had it re-engineered in a Bouctouche, N.B., shop. Installed back in the bush, the camp was a hit. Irving had clearly stumbled on something and he wasn’t one to let an idea like it go to waste.

Sixty years later, it’s clear that he didn’t. That idea has grown into a three-pronged company called Kent Homes Limited that delivers pre-fab houses, modular commercial spaces and mobile offices and shelters throughout Atlantic Canada. It’s still based in Bouctouche (population 2,361, by the way), but it’s now in a 150,000-square-foot facility with views of the Northumberland Strait.

That last prong – Kent Mobile Shelters – is our topic here, and as current director Peter Kinney tells it, the mobile office and shelter piece was a natural add-on to the shelter business K.C. Irving spotted in 1958. “Back in the early ’60s there were major infrastructure projects in the province — things like the Mactaquac Dam, the Irving Oil Refinery and the modernization of Irving Pulp and Paper  — and they needed temporary spaces to work out of. So we really hit the ground running.”

Kinney says that the majority of their customers still come from the construction industry, but that they’ve worked with music festivals, mines, and power companies across the east coast as well. They also have a three-person division in Argentia, N.L., to serve clients there along with the seven in Bouctouche.

The other big difference between the Kent Mobile Shelters of yesteryear and today is the range of options for clients. Each trailer is 12 feet wide, but they come in 20-, 30- , 40- and 60-foot-long sizes. The longer trailers can be customized to include multiple offices, kitchenettes and half bathrooms, and all of them can be outfitted with everything from stackable chairs to executive soft-seating chairs to ergonomic seating options to office desks to free-standing tables. Customers can also get dedicated washroom trailers and change rooms.

“We really want to be a one-stop, turnkey solution for our customers so that they can focus on working,” says Kinney. “And even though these are temporary shelters, a lot of the time this is the workers’ home away from home. So we’ve gone from being a supplier to really trying to connect with our customers, to putting ourselves in their shoes to deliver the best solution for them.”

An evolving market
This isn’t to say it’s easy staying in those customers’ shoes, though, says Kinney. Project managers are moving faster and faster these days and their timelines are getting shorter and shorter. Their needs are a lot more urgent than when he started with the company eight years ago. “They’re also demanding a better and brighter workspace, as they should. Twenty years ago, the wall panelling, the lighting, the design, ergonomics — it was all much more basic. Today there are many more options to meet customer expectations.”

The key to keeping up with those fast-changing needs has been good communication up and down the line, says Kinney. Many of their 10 employees are long-term, so they know how to communicate with customers and one another. Even seemingly standard processes like generating a quote have been maximized for efficient communication. “When a customer decides to pursue the rental, we don’t have to keep going back to them for more information because the quote has it all. We get what we need the first time.”

Good communication also means communicating what you can’t do for a customer, adds Kinney. “If we can’t do something, we’re not going to tell them we can, but we will steer them in the right direction.  Anything to help the customer.”

Sometimes, though, good communication is also doing something that a customer might not even know they want. Like waxed floors. “It seems minor, but waxed floors make a big difference in the eyes of the customer,” says Kinney. “It makes them nice and clean, bright and shiny. When I got here, we rarely did it but now it’s a given. This can be someone’s work environment for 14 or 16 hours a day, so it should be bright and clean and we should be providing a really nice place to work.”

Judging success
Saying that you’re going to provide a really nice place to work and doing so are two different things. The customer has the final say on how well you’ve actually done. Which is why Kent Mobile Shelters uses a net promoter score system to determine customer satisfaction. After the rental is returned, a customer will likely receive a call from an independent third party asking about their experience.

“We have a review every quarter of those scores, and we take them very seriously,” says Kinney.

“It makes you a bit vulnerable, but that’s the beauty of getting a constructive customer response. It’s an honest picture of what you’re doing right and could improve upon.”

Overall, Kinney says that their service consistently ranks high, a fact he is particularly proud of because he believes it’s their service standards that set Kent Mobile Shelters apart from their two main competitors right now.

As for suggestions for improvements, some customers used to say that the units could use a little polishing; that they liked how bright some competitor trailers looked when they first arrived onsite. This is when all of that waxing of floors came in, says Kinney. It’s also when they started replacing dark wall panelling with lighter tones and ensuring a strong commitment to maintenance and cleanliness.

As Kinney said earlier, though, good communication is also about making it clear what you can’t do. Sometimes suggestions just can’t be accommodated…yet. “If customers are pointing out features that we can’t necessarily put in every single fleet unit we have, we’ll tell them of course. But we also may be able to start putting those features on our next round of units.”

The future of mobile
And what will those future features be? More solar panels and alternative power generators like turbines will be two, says Kinney, but there’s lots of research and development coming down the pike in general. Almost all of it is being done to keep up with the pace of those project managers and what they need in a modern office: efficiency and comfort.

Right now, though, the biggest innovations are actually happening online and Kinney doesn’t see that ending any time soon. “I can see that interest in customers wanting to order a trailer online really picking up steam. It just makes their lives a lot easier.”

He can also see Kent Mobile Shelters adopting a similar online design tool that Kent Homes will launch soon. That tool allows customers to design-build their own home with a layout of their choice and receive a quote right away.

It’s a necessary innovation, but the homebuyer and the mobile office renter have very different needs and wants. That’s a big challenge that will have to be overcome, says Kinney. “We want to be able to make it as easy as we can for the customer to receive the job trailer that works best for them. But when your job trailer is 60 feet long and you’re kind of going in blind because everything was done online and you didn’t get a chance to talk, it can be a challenge. The last thing you want is to have the wrong product or the wrong trailer for the application. So it’s finding that happy medium and I’m sure we will. Direct contact is still vital to the process.”

As for the size of Kent Mobile Shelters, Kinney is happy with where they are operationally and geographically. Any rental guy would like to have more new units built, but he thinks their growth will come from modernizing their rental fleet year over year and keeping their units fresh.

Which really means, of course, that Kent Mobile Shelters’ growth will come from the efforts of its own people. And that can only happen when there is a deep level of respect shown to those employees, as K.C. Irving did when he walked into that logging camp in 1958 and as Peter Kinney is doing now.

“I’m most proud of our people and what we can achieve in a very lean organization,” says Kinney. “We’re a big family and we’re all fortunate to have each other. Everybody cares about each other and the customer. I’m very lucky I walked into this situation. It blows me away every day.”

Not content to see great success for Kent Mobile Shelters, Kinney is giving back through involvement with the Atlantic Canadian Rental Association. He recently became its vice-president. “This is my first year involved with the association,” Kinney says. “I have worked in the rental industry for 13 years, eight of which have been with Kent Mobile Shelters. After attending the Rental Show in Orlando I felt it was important to join the association to not only expand my knowledge and contacts but also to help others in the industry, just like the industry veterans helped me when I first began in 2005.”