Until September
rolled in, heavy equipment stocks in Canada held up relatively well
despite the volatile market, offering investors a little shelter from
the crush of the credit crisis. Commodity prices were still relatively
high, and investors were still optimistic about the country's
infrastructure growth.

For example, contruction equipment
companies like Toromont Industries Ltd. (TIH/TSX) and Wajax Income Fund
(WJXun/TSX) hit 52-week highs of $32.90 and $35.75, respectively, in
August, while Rocky Mountain Dealerships Inc. (RME/TSX) hit a high of
$16.74 for the year in June.

Finning International Inc.
(FTT/TSX), meanwhile, navigated through some prettty rough waters over
the first eight months of the year, its stock fluctuating between near
$32 on the high end and about $22 on the low end.

Investors who
bought all four of these companies on Jan. 1 and then sold them on Aug.
31 would have earned an average return of around 12%. By comparison, an
investment over the same period in the S&P/TSX Composite would have
resulted in an 11% loss to investors.

Since then, however, these
stocks have been punished, falling an average of more than 40% over the
past two months, compared with a 29% drop on Canada's main index.

Bank
of Montreal analyst Bert Powell believes the industry, like almost
everthing else, has simply been hard hit by the threat of a recession
in Canada, along with falling commodity prices, which this sector
depends on. Worse yet, Mr. Powell sees little relief ahead.

"We
believe that the heavy equipment industry fundamentals are challenged
and there is a risk that market conditions will deteriorate further,"
the analyst said in a report last week. "Accordingly, we have revised
[downward] our earnings estimates for our heavy equipment coverage
universe." 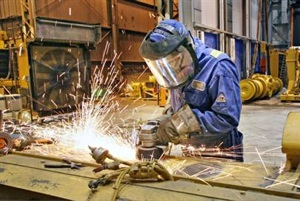 Mr. Powell is particularly skittish on the near-term
fortunes of Finning, and cautioned investors from jumping in despite
the attractive trading level of the current stock price. He said
Finning, which relies heavily on strong mining and oil and gas markets,
will be hurt by lower commodity prices at its Canadian operations and
to a lesser extent operations in South America. He lowered his price
target on the stock to $19 from $28 but left his "market perform"
rating unchanged.

"At this point we believe the [Finning] backlog
has peaked, and while we do not expect to see a raft of cancelled
orders, we would expect deliveries to start to spread out as projects
are delayed or cancelled," he wrote.

He also expects the economic
downturn to hurt earnings at Toromont, Rocky Mountain and Wajax, but
said each of these companies is well positioned to offer investors
upside on the turnaround. He told clients that Toromont's strong
balance sheet provides acquisition opportunities and positions it to
emerge from the current turmoil with solid earnings power, while Rocky
Mountain will likely rebound on the strength of consolidation
opportunities in the equipment dealership sector.

For
Canaccord Adams analyst Tom Varesh, the heavy equipment industry
remains a healthy sector, despite the hurt it has suffered of late. He
reminded investors that the sector will continue to benefit from the
economic boom that has taken place in Western Canada over the past
decade.

Mr. Varesh believes companies like Rocky Mountain and
Finning, which he initiated coverage on with "buy" recommendations, are
well positioned to benefit in the future from a full pipeline of
infrastructure projects and a growing agricultural sector.

"Farmers
in Western Canada currently enjoy a financially strong footing and are
likely to invest in new equipment and technologies that will help them
increase crop yields while lowering costs," he says.

"Furthermore,
we posit that the construction industry in Western Canada — with a
solid pipeline of projects that extends out two to three years — will
need to rent and purchase construction equipment in order to complete
committed projects."