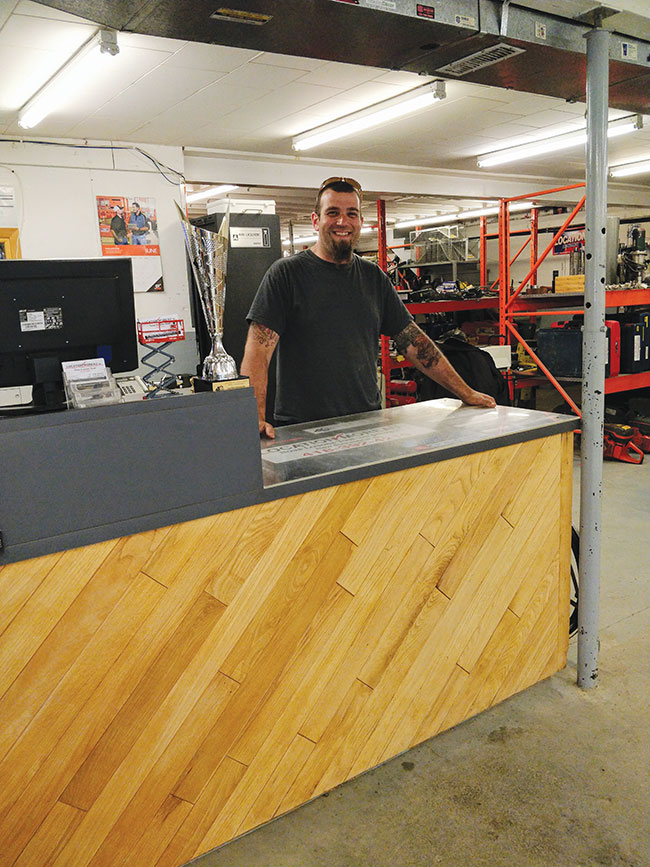 Andre has rental in the blood, having helped out around the store since he was seven. He was recognized in our Top 10 Under 40 feature last August.

Working with family isn’t for everyone. But at Location Moreau in New Richmond, Que., family is far from a dirty F-word. The closeness that the Moreau family shares has allowed for their equipment rental company to successfully service a large territory on the coast of the Gaspe Peninsula.

It has also aided in the smooth succession of the business from its founder – Normand Moreau, who started the business as a small repair centre for power tools in 1975 – to their two children: Andre and Valerie Moreau.

Too often is the case that you hear about the first generation building a company out of nothing, only to have it fail when it is passed on the next generation. While there are many reasons for why this happens – shifts in consumer needs, evolving technologies, a poor economy – poor succession planning is definitely a major factor. Preparing the next generation to takeover the family business, no matter the industry, can’t be done overnight. It takes a great deal of time, training and generations working together to ensure a smooth, successful transition.

“We had a very smooth transition, very positive,” Valerie says, who officially took over the company with her brother eight years ago. “Sometimes within a family there will be friction, but there was none of that because we had lots of respect from both sides.”

“My mother (Jeanne) was doing the accounting, so she decided to teach me so she could retire. It was an easy let-go for her,” Valerie recalls. “My father was still the owner, very involved in the daily activities, so he started teaching me parts of the management he was doing a little bit at a time. When he was ready to let go of a bit, he would spring it to me until my brother and I had total control over daily operation and management. We ran it for just about a year before we signed the papers for a complete buyout.”

For Andre, running the day-to-day operations of the store was all very familiar. He had been working alongside his father coming to the shop since he was seven years old – a tradition he has now passed down to his son, Benjamin, 7, who now goes to the store with his father on a regular basis. For Valerie, working regularly at Location Moreau came a little later in life after graduating university with a degree in biology.

“When I moved back after my studies, I had only summer jobs so I was on unemployment,” she says. “My father told me, ‘You know, I have a special project. I want you to put all of the retail inventory on the computer,’ and then I never left. He’d just tease me with another special project and that continued into the spring, and then continued into something else into the summer.”

When it came time for the two siblings to discuss the succession of the business with their parents, Valerie says everyone had a lot of respect for the emotions involved in a transition like this one, as well as respect for the shifting balance of power.

“As we were taking more power slowly, my father was letting it go,” Valerie says. “He acknowledged that we now want to make some decisions, but we also kept in mind that his counselling and advice were heard and taken into consideration. So there was a lot of respect in that transition… we understood that there are some methods he didn’t want to let go, just to make sure the company and the family doesn’t suffer.”

Valerie acknowledges that her family’s smooth succession isn’t par-for-the-course when it comes to handing over the family business.

“This is not necessarily the typical case you see in every single transition,” she says. “The next generation will sometimes take over the power of the business and the family is excluded, or there are fights between siblings, or fights with the first generation – something nobody wants. It’s really emotional when you see someone build a business for years and you say to that person, ‘Well, from now on you’re not being heard anymore.’”

Andre and Valerie were sensitive to the emotions involved in the succession process, and respected all the years of hard work their father put into building the family business. This resulted in a smooth transition along with an additional bonus.

“It’s great now. My father comes and if he wants to work, we give him work. He’s become cheap labour and gives good advice,” Valerie laughs, adding that her father trusts their decisions – even those he may not fully understand related to technological upgrades for the business. “We’re making decisions he doesn’t understand fully, like on [new] software, and he’s okay with that.”

Valerie says being part of a multi-generation, family-run business offers additional advantages beyond having her parent’s knowledge at her fingertips.

“We don’t have to plan family activities, we’re together every day. And we get along well, so that’s another plus,” she says. “Our father, being the person that he is, has the wisdom of history, and we have the knowledge of technology, so we can put it together to understand how things were done in the past, and get together to help out with new tools needed.” 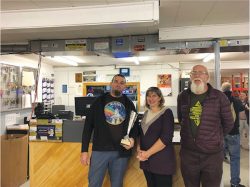 Andre and Valerie are doing most of the day-to-day management, now. But they are sensitive to dad Normand’s desire to stay involved. Together, they are winning awards at a fast clip.

Hitting the hat trick
“For us, this year is a hat trick,” Valerie says, adding that winning the Chamber of Commerce of Bonaventure’s award offered a fantastic opportunity to showcase the company’s latest successes. “I made sure to let everyone know that Andre was a Top 10 Under 40.”

Valerie saw many familiar faces at the Chamber of Commerce of Bonaventure’s awards gala.

“I was looking all across the room and was like, ‘You’re my client, and you’re my client.’ Most of those businesses are clients for our store, so we made sure to let them know that we were also recognized in our industry.”

“The Gaspe coast is kind of a line, so I go 100 kilometres one way and 100 kilometres the other way. We’re all living on the side of the ocean,” Andre explains. It goes to show that rental stores don’t have to be huge and serving big urban markets to gain admiration in the industry.

Becoming active in the Canadian Rental Association’s Quebec Chapter over the past few years has been one of Valerie’s most enjoyable aspects of being in the rental industry.

“We’ve been a lot more involved with the activities of the CRA and the Quebec Chapter and that’s nice – to meet other people who do stuff like you, and share knowledge that helps make us better,” she says. “When you get out of your own little jar, you realize that your challenges and other people’s are the same. Sometimes you can solve those challenges by being inspired by other people’s solutions… sometimes the first step is intimidating, but once you get welcomed by this big family, it becomes very easy and comfortable.”

When it comes to future plans for the family business, both Andre and Valerie would like to expand Location Moreau’s rental inventory to include more large tools for their contractor clients. The company recently started adding more inventory in this regard, with the purchase of an aerial work platform and a telehandler, but would like to keep growing their fleet.

But for now the bread-and-butter is still the kinds of equipment rental stores all over the country rely on because they have broad appeal and will be out on rent most of the time. Compactors, excavators, pumps, compressors and concrete mixers figure heavily into Location Moreau’s construction offering. As befits the small market, they don’t shy away from the small stuff, carrying hand tools and gardening equipment. And they haven’t overlooked the opportunity in event rentals, offering portable toilets, popcorn machines, helium balloon canisters and everything else for weddings and parties. Key brands include Mikasa, Doosan, Brooks, Tsurumi, Kubota, Takeuchi, Skyjack and Cisolift.

Then there’s the repair services, a legacy of Normand’s earliest days in business. In addition to general equipment and tool repairs, Location Moreau is a certified dealer and service centre for several vacuum cleaner and central vacuum brands. The store also carries a full line of welding supplies and is one of the largest Air Liquide compressed gas depots in the region.

That said, what the Moreau siblings want to do more than anything is continue to help their customers find the right tools for the right jobs.

“We’re at the service of our clients. We’re there to solve their problems,” Valerie says. “Getting the client to realize there is a right tool for the right job, and with the right people… I like that a lot.”