The low-down on low level – in praise of shorter lifts

Common: a word to describe something that’s well-known by the masses, whether it’s common knowledge or a common way of doing something. But nowhere in the definition of “common” does it say, “the best solution.” Such is also the case with 19-foot scissor lifts. 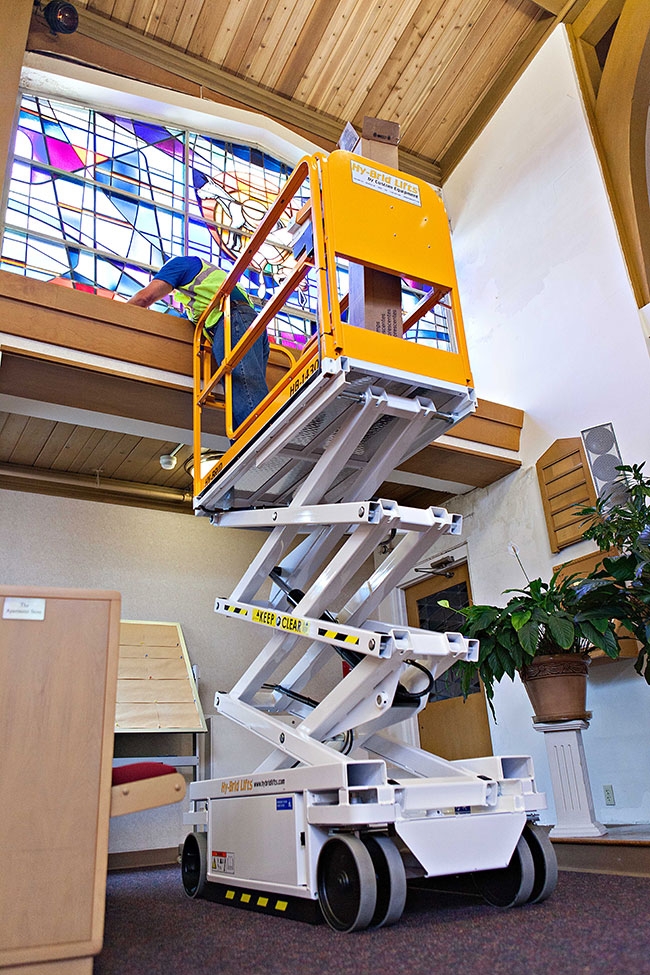 Self-propelled low-level lifts weigh as little as 1 Common: a word to describe something that’s well-known by the masses

While these units are the most common pieces of equipment used to reach work-at-height jobs, they are not always the best solution. In fact, in most cases, a 19-foot lift is overkill in the height department and, when it comes to accessibility, lifting capacity and maintenance, its performance falls short. The best solution? A not-so-common self-propelled low-level scissor lift.

What’s classified as a low-level lift? Low-level scissor lifts feature a platform height between eight and 14 feet, allowing users to work at 14 to 20 feet. Most general contracting jobs, such as framework, electrical and HVAC, fall within this range, making low-level lifts ideal for use on these types of projects. But they do more than just elevate to the right height. They raise productivity thanks to several features that enhance ease of use, ergonomics and capacity.

A low-level scissor lift offers as much as 250 pounds more platform capacity than its taller counterparts, resulting in significantly more opportunity to carry materials and an extra person. More materials in a single trip saves time and money, not to mention hassle, resulting in a more profitable job.

While low-level lifts can hold more weight, they actually are lighter than 19-foot lifts. Nineteen-foot models weigh about 2,800 pounds on average, which equates to higher wheel loads that can damage finished floors and prolong the time before they can be used on green concrete.

Self-propelled low-level lifts, on the other hand, weigh as little as 1,273 pounds and feature dual front wheels that distribute the weight, resulting in low wheel loads. Contractors can get onto fresh concrete sooner and work on finished floors, such as tile, raised floor panels and laminate, with minimal risk of damage.

For example, let’s say an insulator needs to wrap ductwork in a computer lab. The floor is finished with 24-inch-square raised floor panels that can withstand a rolling wheel load as high as 600 pounds. A rolling wheel load is the lift’s weight divided by the number of wheels, so four. This means that the 3,160-pound lift cannot be used since it has a 790-pound rolling wheel load. Now the insulator has two options: either use a ladder or consider a low-level lift. Even the tallest of low-level lifts, a 14-foot model, has a low enough rolling wheel load – 412 pounds – to work on this raised floor without causing damage. And because it offers as much as 15.63 square feet of platform space to load with supplies and is inherently safer and more ergonomic than a ladder, the lift is the optimal choice.

The ergonomics of low-level lifts versus ladders are a no brainer, but are they any more ergonomic than 19-foot lifts? One might think that a lift is a lift and the benefits of one model to the next are the same. But upon closer inspection there are some key differences that can impact ease of use and injury risk.

Entry height is one of those features. Nineteen-foot lifts have entry heights as high as 42 inches, which includes multiple steps up and onto the platform. What’s more, a contractor can’t simply step up and on to the lift’s platform. They must first undo a chain or lift a bar – a cumbersome task when loading materials by oneself, let alone when carrying materials onto the lift. The step-up height and not-so-user-friendly entrance on to 19-foot platforms leaves ample room for injuries, from trips to strains.

273 pounds and feature dual front wheels that distribute the weight

Conversely, low-level lifts offer swing-open gates so contractors can focus on productivity rather than avoiding injuries. They also keep entry height to a minimum: as low as 20 inches.

Once work gets rolling, being able to quickly and easily move from one spot to the next within a confined jobsite is critical to maintaining productivity. Nineteen-foot lifts can take up nearly five square feet more than low-level units, so they can be challenging to get into tight areas and manoeuver through doorways. Also, the wider the lift, the wider the turning radius, so manoeuvering around tight corners can be a challenge as well. Nineteen-foot lifts have taller stowed heights, too, which leaves little clearance for getting under doorways. Personnel elevators are a challenge as well since the lifts are often over the weight capacity. Low-level lifts offer shorter stowed heights and are generally more compact, yet offer ample platform space so they are ideal for construction tasks in tight jobsites and finished spaces.

Getting the lift into the space is just one part of the equation; leaving that space the same way it was found is another. A person wouldn’t wipe their muddy feet all over a friend’s $800 wool area rug and, likewise, when working in a finished space, a lift operator shouldn’t leave unsightly scuff marks or hydraulic fluid leakage for someone to slip on.

The operator can, of course, clean up scuffs and fluid, but they also can nearly avoid them — and the related cleanup time and expense — with low-level lifts. Low-level units with a hydraulic system that only powers the lift up and down, with battery power for the driving and steering, only have two hydraulic connection points. Compared to larger lifts, which typically have more than 20 connection points because hydraulics power the steering, driving and lifting, the chance of a hydraulic fluid leak is greatly reduced. Some low-level lift hydraulic systems even feature a pump and cylinder that are combined, eliminating hoses. This minimizes the risk of a leak that can lead to potential carpet damage and slip hazards. In addition, counter-rotating wheels reduce friction, which allows users to manoeuver over tile or carpeting without marking or causing tears.

It’s common to think a 19-foot scissor lift is the best option for work-at-height tasks but a closer look at low-level lifts reveals that taller isn’t always better. Whether it’s their lower wheel loads or higher platform capacities, low-level lifts are designed to take on nearly any project while keeping ergonomics, safety, ease of use and productivity as top priorities.