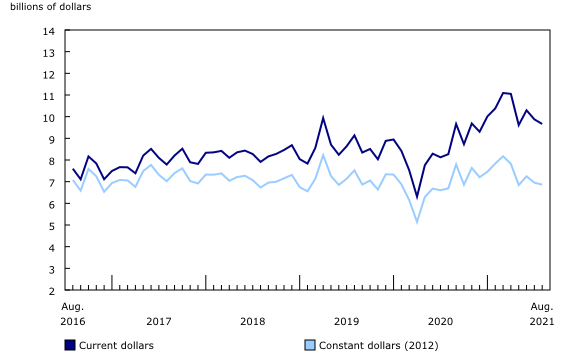 The total value of building permits in Canada decreased 2.1% to $9.7 billion in August. Although most provinces reported increases, notable declines in Ontario and British Columbia pulled the national results lower compared with July.

Residential permits continue to trend down since March peak

Residential permits decreased 8.3% to $6.4 billion in August, the lowest level since March. Ontario and British Columbia drove most of the decline.

Construction intentions for multi-family units fell 15.9%, largely reflecting Ontario’s decline (-24.3%). This was despite the approval of high value condominium projects in the city of Toronto.

In contrast, single family intentions were up slightly (+1.2%), led by a 15.7% gain in Quebec. Additionally, Newfoundland and Labrador (+0.7%) reported the first provincial increase in this component after six consecutive monthly declines.

Non-residential permits up in August

Commercial building permits were up 14.9% nationally, supported by Ontario’s third consecutive month of growth. A 10-storey office building permit in the city of North York contributed to Ontario’s gains.

The value of institutional building permits rose 21.9% in August. Much of this growth came from Quebec (+78.0%), largely reflecting a $116 million permit for an expansion of a hospital building in the city of Verdun.