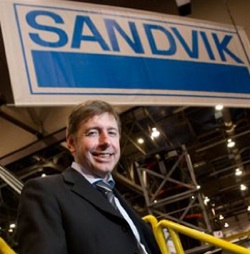 March 26, 2011 – Industry trends over the last 75 years suggest the
global construction industry is now back on the path to growth,
according to Sandvik Mining and Construction president, Thomas Schulz.

“By tracking GDP since the end of the Second World War it can be seen
that if global GDP exceeds 2.75 per cent then there is growth in the
construction sector,” Schulz said. “In 2009 global GDP was negative for
the first time in the last 75 years at -0.79 per cent, but this year it
is forecast to be 4.1 per cent and 4.2 per cent in 2012. This is good
for the construction industry.

“Whether this GDP growth signals the start of a new boom period has yet
to be seen and will vary by region but there is a definite return to
growth – the US market is rebounding and there are areas of excellence
in Europe too,” he said. “Looking at the market, it is clear that it has
always been a cyclical business and there has been a traceable
eight-to-10-year cycle since the end of the Second World War. Normally
there will be a boom over a six-year period with a decline over a
two-to-three-year timespan and I am  optimistic that we reached the
bottom of the market last year.”