Features Profiles
On stage to back stage

Mike Wood made the move from rock star to rentals. 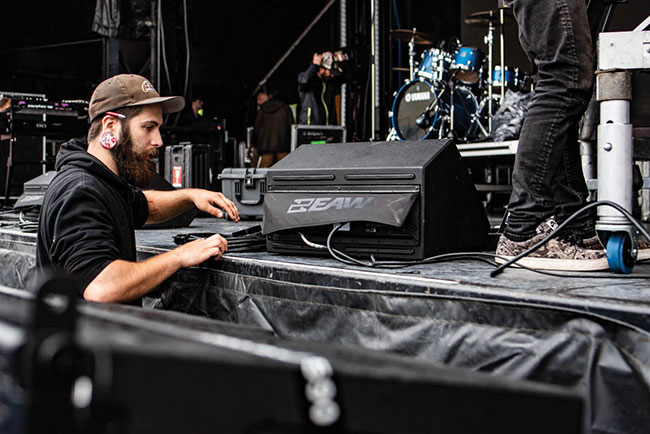 Working at Ottawa’s Algonquin College has proved a boon for OSE, enabling Wood to offer his best students jobs with the company. They work “like crazy,” Wood says.

The more you talk to Mike Wood, the more you realize he has indeed lived a rock-and-roll life. No stranger to the entertainment and events world, Wood is co-founder and chief marketing officer for Ottawa Special Events.

Ottawa Special Events is a multi-award-winning event rental company specializing in the production of large-scale trade shows, concerts, conferences, festivals, galas and more. But before OSE was even a thought, Wood was on a quest to be a rock star.

As a teenager, Wood had one dream. “I desperately wanted to be Axl Rose,” he admits. “So, I walked into the largest studio here in Ottawa, said ‘I want to make a demo tape.’”

Interestingly, the person who made Wood’s demo ended up being Wood’s eventual business partner at Ottawa Special Events, Peter Gilroy. But first, Wood’s life took a series of unbelievable turns.

Over the next few years, Wood would experience many milestones no ordinary person does. He was discovered by the legendary radio D.J. Casey Kasem; released his own music through Warner/Elektra/Atlantic; and toured for over 10 years as a guitar player performing with the likes of Vince Neil of Motley Crue, Buckcherry, Kansas, and Everclear.

Among other highlights, he was the American Idol Insider for Fox in the U.S., has been a music industry analyst on Canada AM, and even penned a best-selling book on Amazon.

In 2007, Wood decided to quit the band and return home to Ottawa to care for his mother.

“I remember thinking ‘What will I do when I get home?’ and literally the next morning, there was an email from Algonquin College, asking if I would be interested in teaching as part of their new music program,” he says.

Having built a friendship with Gilroy over several years, the two of them also started up a music company, partnering with Universal. Wood also began working at Algonquin as a professor, which he still does to this day.

One night in 2009, Wood and Gilroy decided to also get into the event rentals business.

“Peter had been doing live sound at Italian Week and invited me along and we were inspired as we looked around seeing all kinds of rental items like tables and chairs and staging,” says Wood. “I went home and bought ottawaspecialevents.com for eight dollars.”

Claiming that URL was an instant boon for business. A self-proclaimed “Google nerd,” Wood ensured the site was optimized for search engines. Within three weeks, ottawaspecialevents.com had the coveted top rank on Google — and large events like Capital Pride were contacting them.

“The first thing we ever rented was generators, but we didn’t have any inventory at the time, so I went to Home Depot, rented the generators and doubled the rental price for the client,” says Wood. “I was so worried they would be stolen, I sat next to them all night.”

Their next request was for 400 chairs, so Wood called a local party rental store and got a percentage off the order.

“The phone started to ring so much off the freaking hook that we realized we couldn’t do the music company as well as events — but events seemed more profitable and popular, and we began to realize we were really onto something,” says Wood.

By the end of 2011, Ottawa Special Events had acquired enough gear to fit a 10-by-10-foot self-storage container.

That’s when they got a call from a company in Los Angeles, Calif.

“They wanted to know if we wanted to bid on the NHL All-Star Game, which was coming to Ottawa in 2012,” he says. “Google had made it look like we were this enormous operation, and it was just three of us — me, Gilroy and an admin person! But you know how they tell you to always say yes, and then figure things out later? That’s what we did.”

“Fear” is not a word in the Ottawa Special Events dictionary. No matter the size or complexity of the event, OSE has said “yes”…with spectacular results.

Mike Wood’s music career took him to the heights of rock and roll. In his second act, he’s helping others achieve their dreams of stardom.

They won the contract, and provided furniture, televisions and lighting, as well as their own audio technicians. “We also had to custom-build some leg extenders to get the bar for the event up to 42 feet. Sparks were flying as we were cutting through that steel!”

As OSE’s reputation grew, so did their inventory. The eventually moved to

a permanent space with 13,000 square feet. It wasn’t long before the team also rented out the warehouse next door, giving them another 18,000 square feet. This winter, they hope to only be in the larger warehouse, which they will redo to accommodate all the equipment coming over from the smaller facility.

Meanwhile, the majority of OSE’s staff are Wood’s former students.

“I have about 160 students at Algonquin so I can cherry-pick whichever ones will work the best. Everyone works like crazy around here, being on-site, driving trucks, doing set-ups, lighting and video — one has even been here six years and is now lead production manager.”

The last year of the decade was an incredibly busy one for OSE. In 2019, they worked on and produced several major events including the federal leaders’ debate, the Ottawa Senators Foundation “Sens Soiree,” and the Canadian Gymnastics Championships.

OSE was also selected to be the production rental company for the launch of the Light Rail Transit in Ottawa. “Clients come to us and want something new in terms of their events, and we can even do that at the beginning by providing 3D visualizations and renderings so they can see exactly what their show will look like. That’s what we did with the city.”

“We’re always moving towards more tech, looking at the latest and greatest so we can bring more value to every show we do,” says Wood. “The great thing is that gear gets cheaper and cheaper, so clients can now afford to do things with their events that they didn’t think they could — and they just fall in love with it.”

OSE is very involved in the Ottawa community. One of their initiatives is Keep Ottawa Warm, which has collected 2,500 pieces of winter clothing for shelters.

“We also used to go to Canadian Tire and bring popcorn and cotton candy machines the week before Christmas,” says Wood. “People would make a donation, get a treat, and then we would take that money to buy toys for Toy Mountain.” The company has also partnered with Ottawa Public Health, the RedBlacks CFL team and other local sports teams to host Naloxone safety kit training sessions.

“Our staff is made up of primarily of amazing young people and these early-20-somethings donate their time every year and spend hours trying to raise money for those in our community who need an extra helping hand,” says Wood.

The community, in turn, has followed OSE on social media, where the company has a huge presence. To date, they have over 10,000 followers on Twitter, 3,500 on Facebook and 4,500 on Instagram. “So we’re able to get messages out pretty quickly about the community-driven things we’re doing,” Wood says.

While Ottawa Special Events’ clients are usually in the Ottawa region, Toronto, Montreal and Quebec City, Wood hopes to expand their services outside those areas—perhaps even on an international scale.

“We’re always talking about doing more in other cities or growing the business so we can get more shows,” says Wood. He points to an event held by the Chinese Embassy, where OSE provided tents, stages, sound, lighting and more. “We have a lot of languages in our office, and I’m pretty sure we got that contract because some of our staff speak Mandarin.” He hopes that level of service will help further build OSE’s reputation and secure contracts for large events in other countries.