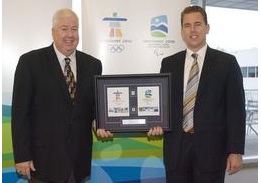 October 22, 2008 – Vancouver – The Vancouver Organizing Committee for the
2010 Olympic and Paralympic Winter Games (VANOC) today announced that Karl's
Global Events Inc. has been named an Official Supplier in the supply,
distribution and management of frame tents and pole tents' product category.
Karl's receives sponsorship rights for the 2010 Winter Games and for the
Canadian Olympic Team through to 2012.
The family-owned business has provided tenting for the past four Super
Bowls, and recently supplied shelters to victims of the hurricanes that tore
through the southern coast of the United States.

As part of the Official
Supplier partnership, Karl's is providing products for preparation and support
of venue and logistical operations for the 2010 Winter Games. These products
include tenting, flooring, doors, and hardwall and glasswall systems needed to
support the production process and serve as structures such as participant
lounges, briefing areas, offices and dining halls in various locations
throughout the Games including the Main Media Centre.
"Karl's will be providing one million square feet of product for the
Vancouver 2010 Olympic and Paralympic Winter Games – which is one of the most
exciting initiatives we have taken on since the company was established more
than 20 years ago," said Karl's president, John Schlueter.

"Keeping in line
with the sustainable nature of our business – one of the key values we share
with VANOC – all of the equipment will be reused after the Games. Our
organization is incredibly proud to be part of the Vancouver 2010 Olympic and
Paralympic Winter Games."

"VANOC chose to work with Karl's because of the organization's excellent
customer service reputation and experience supplying structures for
large-scale events," said Guy Lodge, VANOC vice president, services and
overlay. "We welcome Karl's to the Vancouver 2010 team, and look forward to
working together to deliver temporary tenting infrastructure for the 2010
Winter Games in Vancouver and Whistler."

About Karl's Global Events Inc.
Established in 1966, Karl's is a tent and special event leader, providing
party, tent, and equipment rentals to clients across North America and
internationally. An event rental company providing turn-key service, Karl's
has been rated among the top 20 rental companies by Special Events magazine
since 1998. www.karls.com

Vancouver and Whistler will host the 2010 Paralympic
Winter Games from March 12 to 21, 2010. Visit www.vancouver2010.com.
VANOC's marketing program is focused on securing mutually rewarding
partnerships with shared values to generate sufficient revenue to host
successful Winter Games in 2010 and to leave a financial legacy for sport.