April 17, 2015 - Bandit Industries recently completed the forth plant expansion in nine months to keep up with increasing demand for its equipment. All the plant expansions add space for additional employees and increasing production at the company’s Mid-Michigan facility. 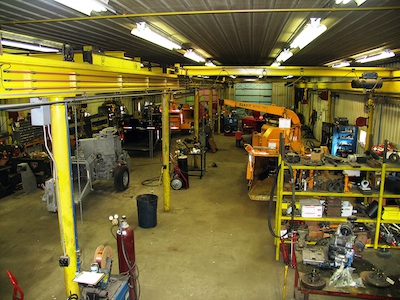 A new electronics facility was finished in November 2014, allowing for increased production of electronic control panels harnesses used on all Bandit equipment. The new facility is now building all of the new control panels and proportional drives that are now featured on all of Bandit’s Tier 4 engine options.

“In February of this year, we moved into a new facility to build drum chipper heads for our hand-fed chippers, whole tree chippers and Beast recyclers, along with the rotors for our forestry mower lines,” said Jerry Morey, president of Bandit Industries. “The new facility freed up production areas in our hand-fed drum chipper area, which is allowing us to increase production in that area by 50 percent.”

“These four expansions have allowed us to add 80 full-time employees and add much-needed production,” Morey said. “Surging demand for our products over the past two years has increased lead times longer than I like, and at times has cost us orders. The additional production capacity will reduce lead times by the end of the second quarter,” Morey said.