From backyard rentals to multiple locations. 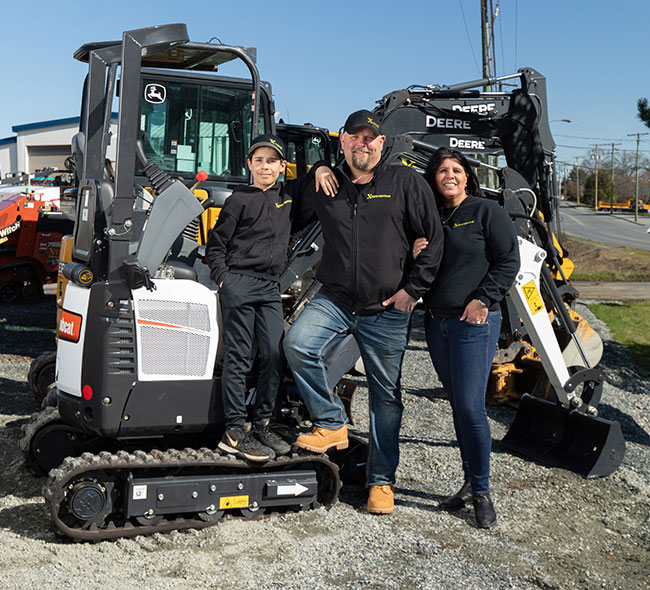 Bill and his wife Bonnie (in picture) co-manage both locations of Xtend Rentals and Safety.

A small company based out of Ladysmith, B.C., is making a name for itself as one of the go-to equipment rental and safety gear supply stores on Vancouver Island.

Xtend Rentals and Safety was started up a little over three years ago by Bill Robinson, shortly after he moved to the island seeking a change in lifestyle after working in the farming and mechanical contracting industry for 31 years.

“I own a plumbing and heating company on the mainland: Maple Ridge Mechanical,” says Robinson. “The company got too big for one person to comfortably manage in 2015-16. My stress level was through the roof managing up to 41 projects and 27 people at a time.”

While watching a reality show on television in 2016 about couples that relocate to remote islands, Bill joked to his wife that they should move to the island. They would be closer to his family and their son, Braydon’s, cousins.

Bill’s wife, Bonnie said, “You’d never live away from your business,” he recalls.

Fast-forward 12 months and Bill and Bonnie were re-settled in Ladysmith on Vancouver Island. Little did the couple know that they were going to be getting into the equipment rental business shortly afterwards.

“The house needed a little renovation and landscape work, so I bought a Bobcat mini-excavator,” Bill recalls. But after he completed his landscaping work on their property, the machine just sat there doing nothing. When Bonnie eventually suggested selling the machine, Bill decided to rent it out instead.

Within 10 minutes it was on Craigslist for rent and within an hour the first booking came in.

“After that afternoon I rented it out almost non-stop for the next 30 days,” he says. And the phone just kept ringing.

Seeing a need for rental equipment in his community, Bill decided to purchase a few more machines to rent to local contractors and homeowners.

“Once we had our third excavator being rented out of our yard at home, I said, ‘I can’t slow down now. This is cool, this is too much fun’,” he recalls. “Before long, I had seven excavators in my yard, four skid steers and a truck full of rental tools. We just kept on going. We bought a one-acre lot on the Trans-Canada Highway and filled it up pretty darn fast. Then we built a gravel and mulch sales yard there as well. The whole outside of the lot is lined with equipment and two sides are filled with gravel, mulch and soil bins.”

When Bill started up the rental business off of his front lawn, his wife didn’t want anything to do with the new company. But since then, it’s grown on her.

“She hated it when her yard at home had machines coming in and out constantly,” he says. “Now she helps manage both of our locations. She’s all-in now.”

Bill decided to name the company Xtend Rentals and Safety shortly after renting out his first piece of equipment.

“That night I was joking to my wife about starting up a rental company. After I rented out the first machine and was shopping for another one, I said, ‘We need to think of a catchy name,’” he recalls. “I was planning on renting excavators, skid steers and track loaders – keep it simple. All of the booms extend, so I said, ‘Let’s call it Xtend Rentals.’ She had my first Xtend hat made for me a week or so later, which I thought was cool since she didn’t really like that I was on a second business venture.”

Bill’s goal was to become a household name in the central region of Vancouver Island over the next five years. He’s certainly on his way towards accomplishing that goal.

“We currently have over 4,000 rental and safety gear items available; over 60 pieces of tracked or rubber tire machinery we rent as well as seven delivery trucks,” he says. “We’ve grown from just me to 11 full-time employees and seven part-time employees in the past three years.”

Xtend Rentals and Safety opened up its second branch two months ago in Nanaimo and Bill has plans to bring on additional full-time staff in the coming months. He is also considering opening up a third location.

Safe returns
The “Safety” portion of Xtend Rentals and Safety stemmed from Bill identifying another need in the contractor marketplace.

“That’s the one thing that was somewhat lacking in the Greater Nanaimo area. Only a few stores stock that kind of product,” he says. “We slowed down with rentals during our first winter, so we thought about adding another revenue stream that would be year-round. It took me about five minutes to think of safety gear.”

The safety product side of the business grew fairly quickly in popularity, and now the company offers a wide variety of branded safety products.

“Our safety gear sales might even surpass our rental sales one day,” he says.

A passion for the mechanical
Bill’s passion for the plumbing and heating sector isn’t what it once was. He still runs his Maple Ridge-based business overseeing 12 employees with the help of his nephew, who works as a technician and oversees the company’s day-to-day operations. That said, Bill’s love for all things mechanical is still in him, and has been in his blood since he was a small boy.

“I was born on a large farm in the Lower Mainland,” he says. “Thanks to my dad, who passed 13 years ago, I’ve had huge exposure to equipment since I was six years old. I actually started operating equipment when I was six years old regularly. My dad stuck me in the seat of a Massey Ferguson 135 Tractor in the middle of a field and asked me to pull the disc around until there were no rough spots left.”

Bill recalls his mom being a little upset at his dad for leaving him out there in the field below their home where they couldn’t even see him. A few hours later, they heard the tractor shut off. Turned out that Bill got stuck in a muddy area and stalled the tractor.

“Since that day back in 1977, I’ve been addicted to everything that’s mechanical. I’m a car nut. I’ve had 53 motorcycles ATCs and quads. I have an 850-horsepower Camaro and a 650-horsepower Buick Grand National. That’s my real passion. Anything that moves or is mechanical or a tool, I’m totally addicted to,” he says.

Bill often asks himself, “‘How have I been so fortunate that this is now what I do for a living?’ I have a candy store for construction and contractors.”

Bill’s vast experience with operating equipment and tools gives him a wealth of knowledge that he is happy to share with his customers. He’s had a total of 32 years of experience in the farming and construction sector – an especially impressive number given that he’s only 48 years of age. When asked if he has any favourite tools or equipment, there are a few that are at the top of his mind.

“I’ve spent many years on the end of a coring machine and we now rent a fleet of them,” Bill says. “Deere, Hilti and Husqvarna are my favourite brands and always have been. Most rental guys don’t get to spend 30 years of their lives actually running equipment and using tools before renting them. I’ve been very fortunate in that respect.” 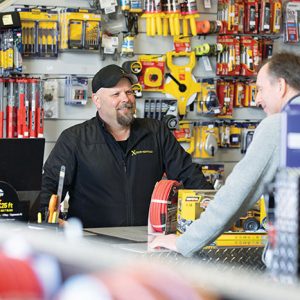 Bill Robinson’s decision to rent out his Bobcat mini-excavator through a Craigslist posting started him on the path to building his Xtend Rentals and Safety business. 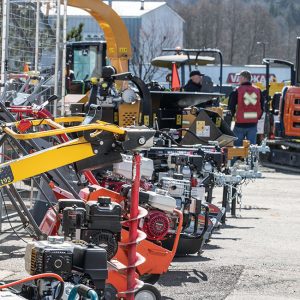 Xtend Rentals and Safety currently offers over 4,000 rental and safety gear items and rents out over 60 pieces of tracked or rubber tire machinery as well.

People problems
When it comes to Bill’s favourite aspects of operating his rental equipment business, playing with tools and operating equipment actually sits second on his list. Number one is his day-to-day interactions with his customers, helping them solve problems.

“I love dealing with people and problem-solving issues,” he says. “I love my clients and they will tell you that relationships are really important to me. Tools and equipment have always been secondary to that.”

The only real challenge the company experiences when it comes to people is finding the right staff to fit the company’s rapid growth.

“We pride ourselves on having really happy staff, a very positive environment and making sure they’re well trained,” Bill says.

Social media savvy
Bill recently started up a YouTube channel – Tracks, Treads and Tools – to show people how to operate a variety of equipment and showcase some of his latest tools. He plans to build on that in 2020.

“You’ll see a lot about our tools and a little about myself as well,” he says. “We’re going to do a full tool preview page, and a truck review featuring reviews of our tow setups.”

The company also has an Instagram account that showcases equipment and tools for rent at his locations.

This isn’t the first time Bill dived into online promotion for his passions. Back in 2000, he ran a website for car enthusiasts called MonsterSpeedfreak.com. At its peak, Bill says it had approximately two million subscribers, which was a lot back then.

“It was one of the biggest automotive-related websites on the internet in 2000,” he says. “It featured writeups on people’s custom car, truck, boat and motorcycle builds, and what they did to build them. We were getting up to 100,000 unique visits per day.” That experience has helped a lot while growing Xtend.

Future growth
In addition to another potential rental store in Southern Vancouver Island, Bill says he’d like to have a few more locations over the next five years. But he and his wife would also like to spend some time travelling, maybe do some car racing and spend more time with their son. So, he’s not sure he’ll expand that aggressively. Only time will tell.

“I now spend most of my days delivering equipment all over the island, which is my favourite part of this business. It’s crazy how well this fits my lifestyle, it never feels like work,” Bill says. It’s surreal, It’s super surreal.”