Since 1956, A&B Party and Event Rentals in Vancouver has always been a family business. For the Sebal family, it started when Tom Sebal was a vice-president of Woodward’s stores in the 1980s. 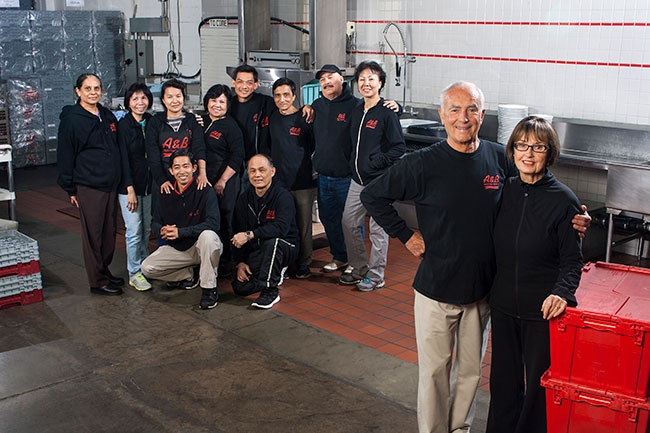 “When the department store chain fell on hard times, Zellers came in with their own executives and gave my father a severance package,” says Tom’s son, Daniel Sebal, company principal.

“My brother Malcom had already graduated from high school and I was just about to graduate. My dad came home and asked us if we wanted to go into business together. He said he was looking at this small company called A&B Rentals.”

“We decided to take a look at it and bought it as a family with my father’s severance package. We started with five employees, a one-ton propane cube truck and a Dodge Caravan,” says Sebal. “At the time in 1990, A&B Rentals had tool and party rental components. We sold the tool business off before we even moved in. So there we were, the four of us plus six employees working seven days a week.”

“We had a 6,000 square foot warehouse with no computer system so everything was handwritten. Inventory in and out was scribbled on a piece of graph paper in my father’s office. That was a nightmare because we were erasing orders all the time as everyone knows that customers change their minds.”

The family began to grow the business over the next 10 years. They upgraded to a three-ton Hino with Chevy Savana cargo vans and then disaster struck.

“On January 17, 2001, I was on my first day of vacation and I looked at my phone at about four in the morning and noticed I had 14 missed calls,” recalls Sebal. “It was one of my employees Mike. He was at the warehouse with my family and there was a three-alarm fire. I’ll never forget crossing the Cambie Street Bridge, racing to work and seeing this mushroom cloud where our warehouse was. I pulled around the block and there were three ginormous firetrucks outside and flames coming out of every window.”

Because there was so much plastic in the warehouse, it made it such a hot fire even the things that didn’t burn were destroyed through smoke damage. “We lost everything. We all kind of sat back in shock and decided to regroup the next day.”

A few weeks later, the landlord whose warehouse had been destroyed purchased a new building for the Sebal family a few blocks away. “That’s when we decided to get back into the business. The insurance money was a loss. It was brutal pulling money from an insurance company for a party rental company that had so many miscellaneous items that couldn’t be replaced anymore.”

And so A&B Party Rental began the next chapter in its long history with the move into its current 42,000-square-foot home. Substantially larger than the original location, the new building was originally a car dealership so there were a lot of renovations and cleanup to do. “We worked our tails off for 12 hours a day, seven days a week to install computers and dishwashers, rebuild inventory and rebuild trust with our previous customers,” says Sebal. “One of our suppliers, Apex Tents, set up a 40-by-60-foot canopy in the parking lot of the new building so we could accept deliveries.”

“It was the best and worst thing possible. It was something I never want to go through again. It was an immense amount of work, however our landlord was wonderful with us. We lost four months of business and we got fully back to business six months later. We never looked back. And we didn’t lose a single client. Everyone was waiting for us to get back into business so we had a huge support network.”

“We slowly built and built and built. Today we have 49 full-time employees and supply 120 events a weekend. We have a fleet of 10 vehicles including seven three-ton and two five-ton Hinos. We’ve worked really hard to get here.”

The company’s 1,000-square-foot showroom helps set A&B apart from the competition by allowing customers to mock up table settings. “It changes weekly depending on the season and our sales team’s Pintrest accounts,” jokes Sebal. “We don’t want to get in the way of party planners who are our customers, but for the average customer who is planning an event we will offer one- to two-hour consultations for free. We do that as an extra service which people really appreciate.”

“We avoid buying pink elephants,” laughs Sebal. “We try to only buy items that will last two or three seasons. I’ve given up buying linen because I’m very biased and so I give that duty to our sales girls now. Burlap is huge at the moment.”

In the last two years, harvest family style has also been very popular. “Bowls and platters in the middle of extra wide tables where everyone helps themselves are in,” says Sebal. “Malcom and I decided to buy 30 harvest tables with vineyard style chairs for the northern California look and those have been some of the best purchases we’ve made over the past two years.”

“Word-of-mouth is important. You’re only as good as your last party. We spend one per cent on advertising. About three or four years ago, I decided to give it to our sales team and let them handle our social media. Then I realized how important it is so we hired a local social media company to handle our Facebook, Pinterest, Instagram and blog. They create such a personal aspect to it, which is what I always wanted. That has absolutely been one of our largest advertising efforts.”

The Sebal brothers know how to build their brand. “Our trucks are one of our biggest selling points because they are all exactly the same and beautifully clean. You have to have continuity. If there is a bent bumper, Malcom will get it replaced. Customers don’t want a filthy, rusty truck pulling up to their beautiful home and unloading rentals at their daughter’s wedding.”

“Twenty percent of our business is online ordering. People still want to come in to plan a party and see the glassware, which is why we are in the location we are. We pay a little bit more rent than everybody else but location, location, location. We’re five minutes from downtown Vancouver. We will have 40 or 50 pickups in a weekend.

“Our business is seasonal. Over 50 per cent of our business from June through the end of September is weddings. Once September hits, we slowly turn into galas, hotel functions and charity fundraisers. Overall it would probably be 50/50. After 28 years, we know what is coming and it comes. We can just feel it.”

A&B has adopted an easy-on-the-earth business philosophy. “We are the original recycling business; we rent and reuse everything. All of our trucks are biodiesel. We recycle all of our cardboard. Our dishwashing system is based on high heat and not chemicals. We go through 60,000 or 70,000 drinkware bags a year and most of them on the market are not recyclable. We approached our supplier and they came up with a solution that is made from 100 per cent post-consumer waste and is also recyclable. It’s a little more expensive but it is a huge selling point for us.”

“We are very close with the Ronald McDonald House and B.C. Children’s Hospitals and donate four to five per cent per year. I have two kids so I’m a little bit biased to helping children.”

“Our parents retired about seven years ago. We hired them back because they love working here. My mom likes to look at the books and my dad enjoys talking to customers.”

“We’re doing well. I like the steady increases we’ve been making. We are at the point where we are making a good living and need to decide if we want to grow anymore or if we want to fine tune and become more efficient.”

“I don’t want to sound cliché but we are all about our staff and creating a better life for our team,” says Sebal. “We send our sales team to sommelier courses and are inspiring our staff to learn more. We have zero turnover. We have 17 dishwashers and they have all been here for over 10 years each. There has not been a turnover in our sales team in over four years. Our seasonal drivers always come back. If I help our staff, it will just come. If our staff is happy, our business is happy.”